Philipsburg is the main town and capital of the country of Sint Maarten. The town is situated on a narrow stretch of land between Great Bay and the Great Salt Pond. It functions as the commercial center of Saint Martin island, whereof Sint Maarten encompasses the southern half. As of 2011, it has 1,327 inhabitants.

The island was first sighted by Christopher Columbus on 11 November 1493, but there was already an Arawak settlement there before his discovery. Philipsburg was founded in 1763 by John Philips, a Scottish captain in the Dutch navy; the settlement soon became a bustling centre of international trade. Two historic forts bear witness to Philipsburg's strategic importance in St. Maarten's history: Fort Amsterdam and Fort Willem.[1]

This area typically has a pronounced dry season. According to the Köppen Climate Classification system, Philipsburg has a tropical savanna climate, abbreviated "Aw" on climate maps.[2]

The main shopping district, Front Street, is in the heart of the city. Philipsburg also has a port that is visited by many cruise liners, ships like Celebrity Solstice, Crown Princess, Disney Magic, and since 2010, Oasis of the Seas & Anthem of the Seas. 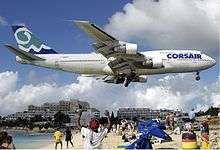 World-famous for its close-proximity photographs of landing aircraft, Princess Juliana International Airport (IATA: SXM, ICAO: TNCM), west of Philipsburg, has become a tourist destination in its own right. Jet blast from departing aircraft is another 'attraction' as it creates artificial waves. However, jet blast is physically hazardous so viewers need to exercise caution; local authorities placed a warning on the airport's fence to alert people to the dangers of jet blast.