View of Kralendijk and Klein Bonaire from Seru Largu 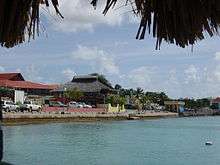 Kralendijk (Dutch pronunciation: [ˈkraːlə(n)ˌdɛi̯k]) is the capital city and main port of the island of Bonaire in the Caribbean Netherlands. The language spoken in the town is Papiamentu, but Dutch and English are widely used. In Dutch, Koralendijk (of which the name Kralendijk is a degeneration) means "coral reef" or "coral dike". In Papiamentu, the town is often called Playa or "beach". As of 2006, the town had a population of 3,061.

Off the coast of Kralendijk lies the uninhabited island of Klein Bonaire, a diving and snorkeling paradise. This small island can be reached by water taxi, or, for divers, by practically all of the local dive operators.

Fort Oranje [1] was built in 1639 to defend Bonaire's main harbor. The fort was extensively modified during the end of the seventeenth century.[2] The English settlement of "Playa" was established adjacent to the fort in 1810. The town was renamed "Kralendijk" by the Dutch colonial rulers in about 1840.

On May 10, 1940, 461 Dutch and German citizens were transported to Bonaire and interned in a camp just south of the fort. After World War II, this camp was converted into a hotel, which is now the Divi Bonaire.[3]

The Tourism Corporation Bonaire [5] has a "Historical Walking Tour" brochure that lists 25 historical sites in the downtown area:

In addition to the stores on the main street (Kaya Grandi), there is a large food market (Cultimara) and a bakery (Exito) on Kaya L.D. Gerharts. There are two warehouse-type food markets on Kaya Industria, on the way to Flamingo International Airport.

The "Public Beach", also known as Windsock, is located 1.5 kilometres (0.9 miles) south of downtown at the west end of the runway of the Flamingo International Airport. Another public beach is at the site of the Bonaire Sunset Beach Hotel [10] about two kilometres (1.2 miles) north of downtown.

Previously Dutch Antilles Express, an airline, had its head office in the Plasa Medardo SV Thielman in Kralendijk.[11] In April 2007 the airline moved its head office from Bonaire to Curaçao, where the airline's flight operations have been based. The airline's call centre and its revenue accounting and handling departments remained in Bonaire.[12]