Benoot turned professional with the Belgian UCI World Tour team Lotto–Soudal in 2015, after riding for the team's under 23 outfit in 2013 and 2014, and riding some races as a stagiaire in autumn 2014.[2]

Benoot made an instant instant impact in the professional ranks by placing fifth in his first Tour of Flanders.[3] Later in the season he showed his abilities in stage races, finishing second overall behind Greg Van Avermaet at the 2015 Tour of Belgium.[3] He also claimed three top-10 finishes in stages of the Critérium du Dauphiné.

Outside of cycling Benoot is a student of economics at Ghent University.[4] 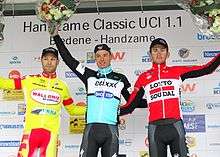 Benoot (right) on the podium after finishing third in the 2015 Handzame Classic. Also pictured are Antoine Demoitié (left) and Gianni Meersman (centre).