Philippe Gilbert (born 5 July 1982) is a Belgian professional road bicycle racer for UCI ProTour team BMC Racing Team.[4] Gilbert is best known for winning the World Road Race Championships in 2012,[5] and for being one of two riders, along with Davide Rebellin, to have won the three Ardennes classics – the Amstel Gold Race, La Flèche Wallonne and Liège–Bastogne–Liège – in a single season, which he accomplished in 2011.[6] Gilbert also finished the 2011 season as the overall winner of the UCI World Tour.[7] Gilbert was accused of abusing Cortisone by an anonymous former Lotto teammate during this dominant period with Omega Pharma–Lotto, an allegation which the Belgian vehemently denies.[8]

Gilbert's younger brother Jerome has also been a racing cyclist.[12]

Born in Remouchamps in the municipality of Aywaille, Gilbert turned professional in 2003 by joining FDJeux.com after riding as stagiaire for the team in late 2000. During this season he recorded his first victory by winning a stage in Tour de l'Avenir. In 2004 he began by winning a stage in the Tour Down Under as well as the young rider classification. He participated in the men's road race at the 2004 Summer Olympics where he finished 49th. He also won the Paris–Corrèze. In 2005 he won several races in France, which allowed him to win the Coupe de France de cyclisme sur route. These victories included Trophée des Grimpeurs, Tour du Haut-Var and the Polynormande. He also took stages in Four Days of Dunkirk and Tour Méditerranéen.

2006 would become his most successful year thus far when he won the prestigious Omloop Het Volk after repeatedly attacking until he got away alone with 7 km to go.[13] During the season he also won Grand Prix de Fourmies and Grand Prix de Wallonie as well as stages at Dauphiné Libére and ENECO Tour.

In early 2007 he had a skin cancer lesion removed from his thigh.[14] Because of this he had to delay the start of his season. That did not stop him from trying himself during Milan–San Remo, where he managed to escape on the Poggio with Riccardo Ricco before being captured 1200 meters from the finishing line. He could not get any victory during the season until Tour de Limousin, where he claimed his only victory in 2007 by winning a stage. In Paris–Tours he was caught with 500 meters to go along with Karsten Kroon and Filippo Pozzato.

Gilbert started 2008 by winning the King of the Mountains competition at the Tour Down Under and the overall classification as well as two stages of the Vuelta a Mallorca. He also finished third in the Milan–San Remo, accomplishing his first podium in a monument. He later won Het Volk for the second time in his career after a solo attack with almost 50 kilometers to go. Four days later he won the GP Samyn. He finished the year by winning the classic Paris–Tours race in a late breakaway where he won a sprint between his three breakaway companions. The peloton finished four seconds back.

In 2009 he joined Silence–Lotto to lead the Belgian team in the classics, finishing third at Tour of Flanders and fourth in both Amstel Gold Race and Liège–Bastogne–Liège. He also took his first stage in a Grand Tour by winning the 20th stage of the Giro d'Italia[15] and won a stage and the overall classification of the Ster Elektrotoer. Later in the season he repeated his Paris–Tours win, attacking on the last climb with Tom Boonen and Borut Božič before outsprinting them to the line. A week later, he also won the prestigious Giro di Lombardia after escaping from the peloton with Samuel Sánchez, beating him to the finish by a half-length. It was his fourth consecutive victory in 10 days after also winning the Coppa Sabatini, Paris–Tours and Giro del Piemonte. At the end of the season he was awarded the Flandrien of the Year award, recognizing him as the best Belgian rider of the year.[16]

In 2010 he won his first classic of the year, Amstel Gold Race, in April. After an aggressive race featuring many attacks, he won through a big attack in the last 500 meters of the climb to the finish, comfortably winning by several bike lengths from the peloton.[17] He also won the first stage of the Tour of Belgium. Gilbert then ended the 2010 season in superb form. He followed up two stage wins in the Vuelta a España with victories in the Giro del Piemonte and the Giro di Lombardia, repeating his 2009 wins in both races. The Giro di Lombardia was won with a solo attack in atrocious weather conditions.[18]

In 2011, Gilbert won the Montepaschi Strade Bianche, a race including 70 kilometres of gravel roads. He then had a quadruple consecutive win: first he won the Brabantse Pijl, then he repeated as winner of Amstel Gold Race, breaking free on the Cauberg. Three days later, he won La Flèche Wallonne dropping his rivals on the final climb of the Mur de Huy and finally he won Liège–Bastogne–Liège beating the Schleck brothers in the sprint. Gilbert thus became the second rider, after Davide Rebellin in 2004, to win the three Ardennes classics in a single year.[19] During the first half of the season he also won stages at the Volta ao Algarve, Tirreno–Adriatico as well as the overall classification and a stage of both the Tour of Belgium and Ster ZLM Toer. 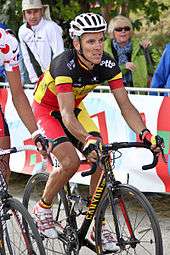 In late, June Gilbert won the national road race championships.[20] In July he would take the opening 191.5 km stage of the Tour de France, winning by three seconds over Cadel Evans, allowing him to be the first person to put on the yellow jersey as overall leader.[21] He lost that jersey in the team time trial the next day but still held the green jersey and the polka dot jersey after stage two. A week after the end of the Tour, Gilbert won the Clásica de San Sebastián, and in mid-August, Gilbert won the 3rd stage at the ENECO Tour, taking his 15th victory of the year.

In September, Gilbert won the Grand Prix Cycliste de Québec and took over the lead of the UCI world rankings by raking in the 80 points allowed to the victor.[22] He followed that performance two days later at the Grand Prix Cycliste de Montréal by finishing on the third step of the podium, despite stating that he felt "no pressure" after his Quebec City victory. With that placing, Gilbert deposited another 50 UCI points in his account.[23] He would race in the October Italian classic, the Giro di Lombardia, taking eight place after he was distanced on the final climb.[24] He eventually closed the season well ahead in the UCI World Tour rankings, with 718 points as his closest competitor Cadel Evans had garnered 584 points.[25] He won 18 races in the season, more than any other cyclist in the professional peloton.[26]

Gilbert was appointed as a member of the inaugural UCI Athletes' Commission in 2011.[27] 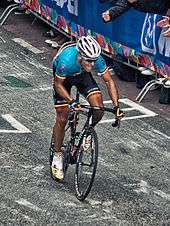 In 2012, Gilbert signed for BMC Racing Team on a three-year contract reportedly worth three million euros annually.[4] His goals for his new squad were to perform highly in the Spring classics and help his team-mate Cadel Evans repeat his 2011 feat of winning the Tour de France.[26] Neither of those came to fruition, as Gilbert's best result in the one-day spring races was third of La Flèche Wallonne, where he got deposited on the final climb by Joaquim Rodríguez who won atop the historic Mur de Huy with a slim margin of 4 seconds.[28] Three days prior, he took sixth position at the Amstel Gold Race and was pleased to achieve a top ten ranking in the Ardennes' race.[29] He missed out on his goal to bring Cadel Evans in yellow to Paris and his best placing in a Tour de France stage was fourth.[26] He also lost both of the Belgian National Championship titles he held, the Road Race and the Individual Time Trial, finishing on the third step of the podium for the latter.[30]

On 26 August 2012, Gilbert finally managed his first victory of the season by winning the ninth stage of the Vuelta a España after breaking away together with Joaquim Rodríguez.[31] He later won a second stage of the race, winning stage nineteen on 7 September.[32]

On 23 September 2012, Gilbert won the UCI Elite Men's Road Race world championship and the rainbow jersey, ahead of Edvald Boasson Hagen and Alejandro Valverde by producing a massive surge on the final climb of the Cauberg.[33] 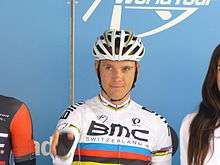 In 2013, Gilbert headed towards the World Championships without a single win in the rainbow jersey, in danger of his first winless season since turning professional in 2003. He started the Vuelta hoping that the competition would, for the second successive year, kick-start his season. After being narrowly defeated in a sprint by Zdeněk Štybar on stage 7,[34] Gilbert finally clinched a victory in the rainbow stripes when he caught and passed Edvald Boasson Hagen to win stage 12.[35]

In 2014, Gilbert picked up his previous form when in the spring he won his second Brabantse Pijl and his third Amstel Gold Race.

Gilbert finished third of the Brabantse Pijl, seconds after his teammate Ben Hermans.[36] At the Amstel Gold Race, Gilbert could not repeat his winning ways of 2014 and came in tenth after having attacked on the final climb of the day, the Cauberg.[37] On the next Wednesday, Gilbert crashed out of the La Flèche Wallonne.[38] He then took part in Liège–Bastogne–Liège even though he was slightly injured and held on to the main group until the Côte de Saint-Nicolas, where he was dropped and finished 36th.[39] He raked in his first victory of the season at the Giro d'Italia, besting the lead group on a sharp incline at the end of Stage 12.[40] He repeated on Stage 18, where he participated to the early break. After being dropped on the last climb of the day, he came back on the remnants of the breakaway after the descent and attacked them to win solo.[41]

Gilbert took his first victory of the season in February at the one-day race Vuelta a Murcia, winning the sprint of a four-man group.[42] He won the Belgian national championship.

This table shows Gilbert's results in the great classics and the World Road Race Championships.