The Tiger Sky Tower, previously known as Carlsberg Sky Tower, is the highest observation tower in Singapore. It is located in the Imbiah Lookout zone in the centre of Sentosa Island. 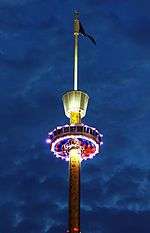 At ground level, visitors enter a large disc-shaped air-conditioned cabin fitted with glass windows all round. The cabin revolves slowly for views as it ascends the tower.

From the top one can view the entire length of Singapore's skyline and a panoramic view of the island. On a clear day, one may even be able to see at part of Johor Bahru and Indonesia's skyline. 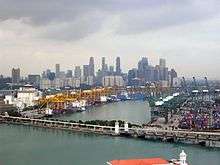 This article is issued from Wikipedia - version of the 9/8/2015. The text is available under the Creative Commons Attribution/Share Alike but additional terms may apply for the media files.