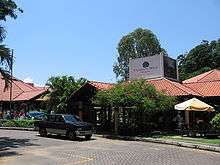 Underwater World (Chinese: 新加坡海底世界) (13 May 1991 – 26 June 2016),[1] also known as Underwater World Singapore Pte Ltd, was an oceanarium located on the offshore Singaporean island of Sentosa. Opened in 1991, it had more than 2,500 marine animals of 250 species from different regions of the world. The oceanarium was mostly underground and it was owned by the Haw Par Corporation. The Underwater World's ticket included admission to the Dolphin Lagoon at Palawan Beach.

Underwater World waz also involved in several environmental and educational projects, such as the Living in the Ocean Programme, Ocean Ambassador Programme and the Coral Club.

On 6 June 2016, it was announced by operator Haw Par that the venue would close on 26 June 2016, Its pink dolphins, fur seals and otters were been transferred to Chimelong Ocean Kingdom in Zhuhai, China the week before the announcement.[2]

The oceanarium was opened to the public on 13 May 1991.[3] It re-opened on 23 February 2010 after a revamp of several attractions within the park.[4] Underwater World Monorail Station used to serve this attraction, but it no longer does since the station closed in 2005.

Underwater World had a 83-metre (272 ft) long travelator that moved visitors along a submerged 6-millimetre (0.24 in) thick acrylic-windowed tunnel from which they could look at an array of marine life including coral reefs, stingrays, moray eels, turtles, sharks and others.

The Underwater World and Dolphin Lagoon offered numerous adventures to the visitors. Some of them included: 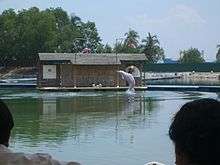 Dolphin performing an agile feat at the Dolphin Lagoon

The Dolphin Lagoon was home to several Indo-Pacific Humpback Dolphins, also known as the "pink dolphins". Several "Meet-the-Dolphins" sessions were held daily that allowed visitors to enter the waist-deep pool and interact closely with the dolphins. The ticket to the Underwater World & dolphin show did not include the direct contact with the dolphins, an additional photo-coupon had to be purchased. The lagoon also included a Dolphin Suite where visitors could watch the dolphin performance from within an air-conditioned area.[2]

In August 2014 the organizations Wildlife Watcher Singapore, in collaboration with Sea Shepherd Conservation Society, disclosed severe mistreatment of the dolphins in the Lagoon in a report.

The pink dolphins have since been rehoused in Chimelong Ocean Kingdom, an oceanarium in Zhuhai, China.[6]

This was amid plans that were being proposed for Sentosa's Integrated Resorts. Genting Group's S$5.2 billion proposal, Resorts World, would feature the world's largest oceanarium at that point in time—the 8-hectare (20-acre) Quest Marine Life Park—which would house 700,000 marine animals in a 30,000,000-litre (6,599,000 imp gal; 7,925,000 US gal) lagoon. Rival bidder Kerzner-CapitaLand's proposal would have an even larger marine habitat, with a capacity of 109,000,000 litres (23,977,000 imp gal; 28,795,000 US gal), including the world's largest jellyfish enclosure and an artificial reef for diving and snorkelling.[7] A week later it was announced that Genting International won the bid. In 2012, the Marine Life Park (also known as S.E.A. Aquarium) opened in Resorts World Sentosa.

List of animals in Underwater World and Dolphin Lagoon 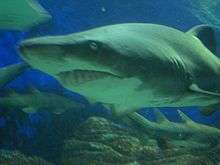 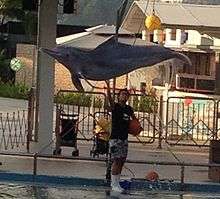