The main entrance of the museum 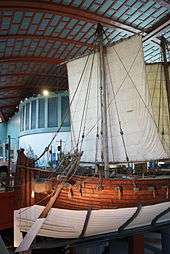 The Jewel of Muscat in the museum, photographed in January 2012

The Jewel of Muscat is an accurate reproduction of the Arab dhow ship presented by the Sultanate of Oman to the government and people of Singapore after its arrival after recreating part of the Belitung ships's route from Oman to Indonesia.

The artefacts, purchased by the Sentosa Leisure Group in 2005, are on loan to the Singapore Tourism Board. The museum, opened on 15 October 2011, will support research and conservation.[1]

The Belitung shipwreck was discovered in 1998 by sea-cucumber fishermen diving in shallow water, just off the coast of Belitung island near Java. The wreck was excavated by Tilman Walterfang where it was discovered that the cargo of 60,000 items was still in place.

Thanks to Tilman Walterfang’s ethical philosophy the cargo was not sold off piece by piece to collectors. Walterfang kept the precious cargo intact as one complete collection so that it could be studied in its original context. It was housed in private storage for six years where the items have been painstakingly conserved (including desalination), studied and carefully restored by Tilman's company Seabed Explorations Ltd in New Zealand.

The cargo was eventually purchased for around $32 million US,[2][3] and was put on display at the ArtScience Museum at Marina Bay Sands, in an exhibition called "Shipwrecked: Tang Treasures and Monsoon Winds" ran from 19 February to 31 July 2011.