Appar Tirunavukkarasar Nayanar (Tamil: திருநாவுக்கரசர் Tirunāvukkaracar "King of the Tongue, Lord of Language"), also known as Navakkarasar and Appar "Father", was a seventh-century Śaiva Tamil poet-saint, one of the most prominent of the sixty-three Nayanars. He was an older contemporary of Thirugnana Sambandar. His birth-name was Marulneekkiyar: he was called "father" by Sambandar, hence the name Appar.[1]

Sundarar states in his Tiruttondartokai that Appar composed 4,900 hymns of ten or eleven verses each, this is repeated by Nambiyandar Nambi and Sekkizhar, but only 313 hymns are available today.[2] These are collected into the Tirumurai along with the compositions of Sundarar and Thirugnana Sambandar, Appar having his own volumes, called Tevaram.

Details of Appar's life are found in his own hymns and in Sekkizhar's Periya Puranam (the last book of the Tirumurai). Appar was born in the middle of 7th century in Tiruvamur, Tamil Nadu, his childhood name for Marulneekiar. His sister, Thilagavathiar was betrothed to a military commander who died in action. When his sister was about to end her life, he pleaded with her not to leave him alone in the world.[3] She decided to lead an ascetic life and bring up her only brother. He is regarded as a divine arrival of saint Vageesar who was a great devotee and an inmate at lord Sivan's Kailasam. When the demon king Ravana out of arrogance attempts to uproot Kailasam that was on his way back to Lanka, lord Siva gently presses down the mountain with his right leg finger, that by itself has such a profound effect on Ravana that he nearly dies. at this point of time saint Vageesar prays to lord Siva to spare the demon so that he may be accounted for and taken to his abode by lord Vishnu to whom the demon was a servitor.

Conversion to Jainism and return to Saivaism

During boyhood, Appar was very much interested in Jainism and started studying its scriptures. He went away from home and stayed in their monastery and was renamed Darmasena.[4] Appar had travelled to Patalipura in Bihar to join a Jain monastery where he was given the name Dharmasena. "Seeing the transient, ephemeral world he decided to probe into truth through renunciation."[5]

After a while, afflicted by a painful illness, Dharmasena returned home.[2] He prayed for relief at the Siva temple where his sister served and was cured. He was also involved in converting the Pallava king, Mahendravarman to Saivaism.[6] This was also the period of resurrection of the smaller Shiva temples. Appar sanctified all these temples by his verses[6] and was also involved in cleaning of the dilapidated temples called uzhavarapadai. He was called Tirunavukkarasu, meaning the "King of divine speech".[7] He extolled Siva in 49,000 stanzas out of which 3130 are now available and compiled in Tirumurais 4-6. 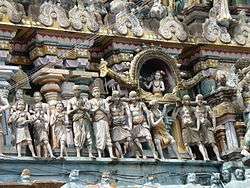 Navukkarasar is supposed to have stayed many years at Atikai with his sister before visiting other Siva temples to sing in praise of Siva. He heard of Thirugnana Sambandar and went to Sirkali to meet him. Thiru GnaanaSambandar respectfully addressed Navukkarasar as Appar (father) and he and Appar travelled together singing hymns. Appar is said to have traveled to about a hundred and twenty-five temples in different cities or villages in Tamil Nadu. He attained Mukti (Union with God Siva) in Sadhaya Nakshtra in the Tamil month of Chithirai at Tiru Pukalur[7] Siva temple at the age of 81.

Appar’s Tevaram hymns are grouped into three books, forming the fourth, fifth and sixth volumes of the Tirumurai, the Tamil poetic canon of Shaiva Siddhanta. The compilation of these books is generally ascribed to Nambiyandar Nambi (10th CE). Some of Appar's hymns set to various Panns, the melodic modes of Ancient Tamil music - the rest are set to Tirunerisai and Viruttam metres. In the last four decades of his life, he visited on foot no less than 125 shrines of Shiva, scattered over a territory of a one thousand miles (1,600 km). He was the only one of the four kuravars to visit the shrine at Tirukokarnam on the western coast of India. He sang 312 decads comprising 3,056 stanzas of devotion.[8]

All the songs in the Tevaram (called pathikam, Tamil:பதிகம்) are believed to be in sets of ten. The hymns were set to music denoted by Panns and are part of the canon of the Tamil music.[9] They continue to be part of temple liturgy today.[10][11] Several of these poems refer to historic references pointing to the saint-poets' own life, voice of devotee persona, using interior language of the mystic.[12] Multi-vocal rheotoric is commonly used taking on personal emotions and genres and some voices of classical Sangam literature. Appar's poems dealt with inner, emotional and psychological state of the poet saint.[3] The metaphors used in the poems have deep agrarian influence that is considered one of the striking chords for common people to get accustomed to the verse.[13] The quote below is a popular song of Appar glorifying Shiva in simple diction.[14]

The tendency to incorporate place names known to the folks in the idiom of the poems is another characteristic feature of Tevaram.[15] The poems also involved glorifying the feat of Shiva in the particular location - the usage of locale continuously occurring in the verses is a testament.[15] According to Prentiss, the poems do not represent social space as a contested space, the hymns represent the hymnists were free to wander and to offer their praise of Shiva.[16] The emotional intensity of the hymns represent spontaneous expression of thought as an emotional responses to God.[16]

Paadal Petra Sthalams are 275[17] temples that are revered in the verses of Tevaram and are amongst the greatest Shiva temples of the continent. The Divya Desams by comparison are the 108 Vishnu temples glorified in the poems of the contemporary Vaishnava Alvars of Tamil Nadu, India. Vaippu Sthalangal are places that were mentioned casually in the songs in Tevaram.[18] The focus of the moovars hymns suggests darshan (seeing and being seen by God) within the puja (worship) offering.[16] The hymnists made classificatory lists of places like katu (for forest), turai (port or refuge), kulam (water tank) and kalam (field) being used - thus both structured and unstructured places in the religious context find a mention in Tevaram.[16]

Raja Raja Chola I (ruled 985-1013 CE) embarked on a mission to recover the hymns after hearing short excerpts of Tevaram in his court.[19] He sought the help of Nambi Andar Nambi,[20] who was a priest in a temple.[21] It is believed that by divine intervention Nambi found the presence of scripts, in the form of cadijam leaves half eaten by white ants in a chamber inside the second precinct in Thillai Nataraja Temple, Chidambaram.[19][21] The brahmanas (Dikshitars) in the temple opposed the mission, but Rajaraja intervened by consecrating the images of the saint-poets through the streets of Chidambaram.[19][22] Rajaraja thus became to be known as Tirumurai Kanda Cholan meaning one who saved the Tirumurai.[22] Thus far Shiva temples only had images of god forms, but after the advent of Rajaraja, the images of the Nayanar saints were also placed inside the temple.[22] Nambi arranged the hymns of three saint poets Sambanthar, Appar and Sundarar as the first seven books, Manickavasagar's Tirukovayar and Tiruvacakam as the 8th book, the 28 hymns of nine other saints as the 9th book, the Tirumandiram of Tirumular as the 10th book, 40 hymns by 12 other poets as the 10th book, Tirutotanar Tiruvanthathi - the sacred anthathi of the labours of the 63 nayanar saints and added his own hymns as the 11th book.[23] The first seven books were later called as Tevaram, and the whole Saiva canon, to which was added, as the 12th book, Sekkizhar's Periya Puranam (1135 CE) is wholly known as Tirumurai, the holy book. Thus Saiva literature which covers about 600 years of religious, philosophical and literary development.[23] In 1918, 11 more songs were found engraved in a stone temple in Tiruvidavayil in a village close to Nannillam, and it was the first instance found where Tevaram verses were found in inscriptions.[24]

In 1921, an English translation of the hymns by Apparswami was done by Francis Kingsbury and GE Phillips, both of United Theological College, Bangalore (edited by Fred Goodwill) and published in a book as Hymns of the Tamil Śaivite Saints, by the Oxford University Press.[25]

Tevaram was one of the sole reasons for converting Vedic ritual to Agamic puja followed in Shiva temples.[26] Though these two systems are overlapping, Agamic tradition ensures the perpetuation of the Vedic religion's emphasis on the efficacy of ritual as per Davis.[26] Odhuvars, Sthanikars, or Kattalaiyars offer musical programmes in Shiva temples of Tamil Nadu by singing Tevaram after the daily rituals.[27] These are usually carried out as chorus programme soon after the divine offering. The singing of Tevaram was followed by musicals from the music pillars in such temples like Madurai Meenakshi Amman Temple, Nellaiappar Temple and Suchindram.[28] The singers of these hymns were referred as Tirupadiyam Vinnapam seyvar or Pidarar, from the inscriptions of Nandivarman III in the Tiruvallam Bilavaneswara temple records. Rajaraja deputed 48 pidarars and made liberal provisions for their maintenance and successors.[22] A few earlier records give details about the gifts rendered to the singers of Tevaram from Parantaka I of the 8th century.[22] A record belonging to Rajendra I mentions Tevaranayakan, the supervisor of Tevaram and shows the institutionalisation of Tevaram with the establishiment of a department.[22] There are records from Kulothunga Chola III from Nallanyanar temple in South Arcot indicating singing of Tiruvempavai and Tiruvalam of Manickavasagar during special occasion in the temple.[22] From the 13th century, the texts were passed on to the Odhuvars by the Adheenams or charitable establishments. The charitable establishments that ran on philanthropy of individuals and merchant caravans had come to be because after the 13th century, the time of ancient nation states viz. cholas etc. was finished, and the temples became only denominated, voluntary, charitable places. This is briefed by a 15th-century, chidambaram temple inscription. During the time of cholas etc. the temple hymn service workers were known as uvacchar and marars. These terms are of very ancient origin and traceable to even early sangam times.