For other uses, see Gokarna.

Gokarna (Kannada: ಗೋಕರ್ಣ) is a small temple town on the western coast of India in the Kumta taluk of Uttara Kannada district of the state of Karnataka.[1] The main temple and deity is Lord Shiva, who is also known as Mahabhaleshwara. This temple houses what is believed to be original image of Lord Shiva's lingam (Atmalinga). There are many other temples all over this small town. Ankola and Kumta on Highway 17 are the main towns near Gokarna.

Gokarna is known as one of the seven important Hindu pilgrimage centers. It is on what was once an unspoiled beach near the estuary of the river Aghanashini. Recently, due to the number of tourists, the character of the town has changed; it is no longer just a center of pilgrimage, though large numbers of devotees visit to offer prayers and worship to Lord Shiva.

Gokarna means Cow's Ear. It is believed that Lord Shiva emerged from the ear of a cow (Prithvi, the Mother Earth) here. It is at the ear-shaped confluence of two rivers Gangavali and Aghanashini. 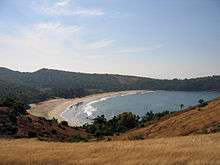 Gokarna is mentioned in the Shrimad Bhagavata Purana as being the home of the brothers Gokarna and Dhundhakari.

In order that Brahma who out of arrogance arising out of his power to create the universe, sat penancing to redeem himself from curse of shiva, Lord Shiva appeared in front of him from the ears of a cow. So the place came to be known as gokarna or ear of the cow. Hindu mythology says that when Lord Parsurama the sixth avatar of Lord Vishnu created Kerala it was from Gokarna to Kaniyakumariya.

As per legend, Ravana was given Atmalinga by lord shiva and instructed that it would stay permanently where it is first placed on the land. But Lord Ganesha came in the form of a boy and planted it in Gokarna while Ravana was performing rituals. Once placed Ravana could not remove it from ground, but he removed some pieces of the Linga and threw them in different directions.[3][4]

The earliest history of the city is in Threthayuga, Ravana (Demon/Asura King of Lanka) reaches Kailasa and performed rigorous penance to get the "Atma Linga" from Lord Shiva, as Ravana's mother expressed a keen desire to worship the atmalinga of Lord Shiva.[5][6] After a long penance, Shiva gave the Atma linga to Ravana as a boon and instructs Ravana to carry it home by walk, that he should never place it on the earth even for a short while failing which the linga would get eternally embedded at the place were he broke his commands.

Lord Maha Vishnu learned that Ravana will become all powerful by worshipping the 'Atma linga' and menace to the world and Ravana's conviction that nobody could defeat him, once he acquired the very power of Shiva. Maha vishnu devised a plan to install the linga somewhere and as he thought that Lord Ganapati was alone capable of doing it, he along with all the gods pleased Ganapati to execute the plan. Lord Ganapati accepts and reaches Gokarna as a Brahmin boy.

As Ravana was coming near Gokarna. Maha Vishnu who had known well that Ravana was punctual in performing his periodical rites (Sandyavandhana), hides sun with his Sudarshana Chakra (Wheel). Thinking that it was time to perform the evening rites, Ravana finds a Brahmin boy and asked him to hold the Atma linga in his hand till he came back after finishing the rites. Ganapati agreed to hold the linga on one condition that he would do so till he would be able to bear the weight of linga and that thereafter he would call Ravana three times and if failed to come to him by then he would place the linga on the earth.

Ganapati calls Ravana three times when he was performing his rites and places the linga on the earth and he vanished. The Atma linga at once got firmly entrenched in the earth. Ravana learned that he had been tricked by the Gods. The depressed demon king Ravana was deeply agitated and tried to pull up the linga, but the linga did not budge a little. It resulted in his throwing the coverings of the Linga to Dhareshwar, Gunavanteshwara, Murdeshwar and Shejjeshwar temples. Ravana was unable to lift the linga from the ground again and called the shiva linga as Mahabala, one with great strength, and ever since, the linga illustrious as Mahabaleshwara. Shiva learnt all these from Vayu Deva, the god of wind, and came on to Earth with Goddess Parvathi devi and his train of Gods, he visited these five places and worshipped the linga which had now taken five forms. He acknowledged that these five places would be his "Pancha kshetras" (Five Holy Places)

Tamil saints like the Nayanmars Appar and Sambanthar from the 6th century CE praised the deity of Tulu Nadu in their hymn Tevaram. It is an established fact that Mayurvarma of the Kadamba kings brought Brahmins from Ahicchatra. A sect of Brahmins fled from the Gomantak to escape forcible conversions by the Portuguese and British and settled in and around Gokarna in the 15th century. It was part of the Sodhe and Vijayanagar kingdoms. When the Konkan region — including Goa — was occupied by the Portuguese, it became part of their rule. A few temples were destroyed by the Portuguese in 1714, rebuilt in the 18th century, and under the supervision of Guru H. H. Shrimat Anandashram Swamiji in 1928.

Gokarna is a temple town and a holiday destination. Gokarna is full of coconut, banana and other trees, blue seas and relatively clean sands. It is a laid-back town with two main streets lined with shops and traditional tile-roofed brick houses. The beaches near Gokarna have shacks (huts) for rent. Kannada is the main language spoken here; Konkani and English are spoken, too. 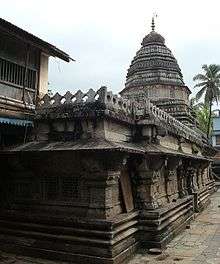 Mahabaleshwara temple, the main temple of the town.

Gokarna is an important centre of Sanskrit learning and houses Bhandikeri Math and Toggu Math. It is a place where Sanskrit knowledge is passed down from generations in Brahmin families. Many Hindus perform the last rites here.

The drive up the winding path that leads to Gokarna is scenic, with the rocky mountains and Western Ghats on one side and the Arabian Sea on the other. Gokarna is known for the beaches. The Gokarna main beach in town and Kudle beach are west facing. Om beach, Half moon Beach and Paradise Beach (also known as Full moon) are south facing.[8]

The Gokarna beach forms the coast of the town and is followed by Main beach in northern direction while the other four beaches lie to the south. Gokarna Main Beach is mainly used by Indian pilgrims. Main Beach is a long open beach, known for surfing. Kuddle and Om are around 6 km from Gokarna town along a muddy hill; they are accessible by rickshaw or foot. Half moon and Paradise are beyond Om beach and are accessible only by foot or boat. Om beach is named so because it is shaped like the auspicious ॐ Om symbol. Om beach is the only naturally Om-shaped beach.[9] Om beach attracts local tourists on weekends. It has a few shacks and eateries, and also boat service to other beaches.

Gokarna is about 238 km north of Mangalore, 483 km from Bangalore and about 59 km from Karwar. It is between the Gangavali and Agnashini rivers along the Karwar coast by the Arabian Sea. It is 200 km north from the college towns of Suratkal and Manipal.

It can be reached by Konkan Railway on the Mumbai to Mangalore route or Goa to Mangalore route. The railway station (called Gokarna Road) is 6 km from the town. The station has a retiring room at a nominal price. Many important trains like Matsyagandha Express, And Mangalore Local and DEMU local are the Daily Local Trains halt here.[10]