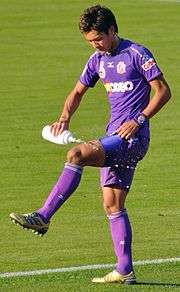 He was a member of Japan U-20 national football team for 2007 FIFA U-20 World Cup and scored one goal in the match against Czech Republic.[1]

He made his full international debut for Japan on 6 January 2010 in a 2011 AFC Asian Cup qualifier against Yemen.

On January 2012, he returned to J. League, loaned by 1. FC Köln to Urawa Reds, when he will be coached again by his former Sanfrecce's coach, Mihailo Petrović.