The 2007 FIFA U-20 World Cup was the sixteenth edition of the FIFA U-20 World Cup (formerly called FIFA World Youth Championship), hosted by Canada from 30 June to 22 July 2007. Argentina defeated Czech Republic in the title game by the score of 2–1, thus managing a back-to-back world title, its fifth in the past seven editions, and sixth overall. Argentine player Sergio Agüero was given the FIFA U-20 Golden Shoe (top scorer, with six goals) and the FIFA U-20 Golden Ball (best player of the tournament), while Japan earned the FIFA Fair Play Award.

The tournament featured 24 teams coming from six continental confederations; Canada qualified automatically as hosts, while the remaining teams qualified based on their rankings at the respective continental U-20 (U-19 in Europe's case) tournaments. UEFA (Europe) qualified six teams; AFC (Asia), CAF (Africa), CONCACAF (North, Central America and Caribbean) and CONMEBOL (South America) four teams each; and OFC (Oceania) one team.

The tournament took place in a variety of venues across the country – Toronto, Edmonton, Montreal, Ottawa, Victoria and Burnaby (Vancouver) – with the showcase stadium being Toronto's new National Soccer Stadium[1] where the final match was held.

On 28 June 2007, two days before the inaugural match, it was reported that 950,000 tickets had been sold,[2] making it the largest single-sport event ever taking place in the country,[3] and on 3 July, the tournament organisers sold the millionth ticket.[4] On 19 July, the semifinal match between Chile and Argentina marked this edition as the most attended in the tournament's history, with an accumulated attendance of 1,156,187 spectators, surpassing Mexico 1983's 1,155,160 spectators.[5] Final attendance totalled 1,195,299.

Twenty-three teams qualified for the 2007 FIFA U-20 World Cup. As the host team, Canada received an automatic bid, bringing the total number of teams to twenty-four for the tournament. The draw for the group stages took place on 3 March 2007 in Liberty Grand Entertainment Complex, Toronto.

1.^ Teams that made their debut.

Rubin Okotie of Austria vs. Destin Onka of Congo at the Commonwealth Stadium in Edmonton on 2 July 2007.

The 24 participating teams were distributed between six groups of four teams each, according to a draw held on 3 March 2007. The groups are contested on a league system, where each team plays one time against the other teams in the same group, for a total of six matches per group. Each group winner and runner-up teams, as well as the best four third-placed teams, qualify for the first round of the knockout stage (round of 16). 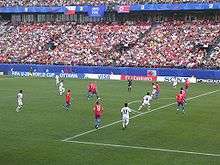 Czech Republic vs. DPR Korea at the Frank Clair Stadium in Ottawa on 3 July 2007.

The Chile–Nigeria quarter-final match took place on FIFA's "Say No To Racism Day." During extra time, Chile's Mauricio Isla scored at the 96th minute. The Nigerians argued that it was offside, though referee Howard Webb allowed the goal to stand. Replays showed that a defender was caught out of place on an offside trap. Goalkeeper Ikechukwu Ezenwa was shown the yellow card for his protest.[6][7]

At a post-game news conference, Nigerian coach Ladan Bosso said, "What happened on the pitch, the officiating, I think FIFA has a long way to go to beat racism, because that official showed racism." When asked if he felt Webb was a racist, Bosso said only that "It's good for FIFA to bring in the fight against racism, but they have to follow it to the letter, so the implementation will be done."[7] The coach was fined CHF 11,000 and banned for four months, as the disciplinary committee found him guilty of "offensive behaviour" under the terms of article 57 of the FIFA Disciplinary Code.

The Nigerian Football Association was also sanctioned for allowing the players to wear T-shirts with religious statements under their game jerseys. This was a violation of the regulations of the tournament, which state, "Players and officials are not allowed to display political, religious, commercial or personal messages in any language or form on their playing or team kits ..."[6]

On 19 July 2007, Chilean players clashed with police following the semi-final match between Chile and Argentina. The Chilean players were angry with referee Wolfgang Stark saying he "lost control of the match early"[8] and complaining about being issued seven yellow cards and two red cards.[9] In total, he issued 53 fouls.[10] Following the match, Stark and his colleagues were surrounded by Chilean players who had to be restrained by members of the Toronto Police Service. Stark was then escorted off of the pitch and into the dressing room tunnel by police officers for fear that he would be attacked by the crowd or Chilean players.[11] Afterwards, several players and delegates of the Chilean team were involved in a brawl with police outside Toronto's National Soccer Stadium,[12]

The Toronto Police Chief Bill Blair said that the melee began when Chilean players got into a scuffle with a rival fan.[13] He added that "members of the Chilean team then decided to direct some of their aggressive behaviour towards my officers... The job of my officers was to respond in a firm, but fair, manner to end that violence. They are trained to do so, and that is what they did."[13] The Chilean players say that Isaías Peralta walked towards Chilean fans stationed behind a security fence, but was stopped by about ten policemen. They then say a heated discussion took place, where Peralta (who speaks no English) was verbally and physically abused by the policemen.[14]

Peralta was tasered by one police officer and lost consciousness for 20 minutes.[14] The other players then got involved in the struggle with the police, before getting back on the bus and closing the doors. According to eyewitness accounts, the players on the bus began throwing things at police through the windows and tried to grab officers from inside the damaged bus.[15] Three minutes later the president of the Chilean National Association of Professional Football (ANFP), Harold Mayne-Nicholls, asked the players to descend from the bus to take a different one. As the players were getting off the bus the police then took the players back to the stadium.[16]

FIFA spokesman John Schumacher said, "The Chilean players were detained by the police to de-escalate the situation that was taking place in front of the stadium.

Ten Chilean team members were detained over three hours and then released without charges.[17] FIFA president Sepp Blatter said the next day at a press conference in Toronto that the incident was "regrettable" and that he "apologized in the name of FIFA."[18] The ANFP (Chilean Professional Football Association) hired a Toronto law firm to pursue legal action against the Toronto police.[16]

In Chile, the incident was on the front page of every major newspaper. The Canadian embassy in Santiago received a bomb threat and angry Chileans protested outside the embassy with signs reading "Racist Canada."[19] Chile President Michelle Bachelet said that the incident was "especially serious because, in our opinion, the Chilean delegation suffered unjustified aggression,"[18] and lodged a formal protest with the Canadian government.[20] In response, Canadian Prime Minister, Stephen Harper remarked that "international soccer matches are hotly contested and often become very emotional. As you know, there are processes in Canada by which the authorities review these kinds of incidents and I don't intend to comment further."[20]

It was reported in the Canadian media that one of the Chilean team members had punched a female police office in the face before Peralta had been tasered.[21][22] An internal review headed by Superintendent Jim Ramer found that officers had acted professionally and with "an immense amount of restraint" during the conflict outside BMO Field, in which Chilean players "punched, kicked, spat on and kicked" police and security staff. The report stated that the violence started when two people not involved in the game confronted each other. Security guards first attempted to intervene, and then police, which is when a Chilean player punched a female police officer in the face. From that point, the report said the violence escalated; Chilean players dismantled the armrests and footrests from the bus seats, and smashed the windows in order to spit at and throw these objects, plus D-cell batteries, clothes hangers, and cans of deodorant at the police. Four officers were reportedly injured by projectiles. FIFA agreed to pay for the $35,000 in damages to the team's rented bus.[21]

Harold Mayne-Nicholls, chair of the Football Federation of Chile and a witness to the event, said, "I didn't see any Chilean player hitting any officer except between all the struggling." Patricio Bascunan, president of the Salvador Allende Cultural Society of Toronto, said an independent review was needed.[21]

Chile's Jaime Grondona was suspended for nine months at all levels (domestic and international) and fined CHF 7,000 (including procedural costs) for assaulting match officials. The Chilean football association was fined CHF 15,000 for "team misconduct".