Yuki Abe (阿部 勇樹, Abe Yūki, born 6 September 1981) is a Japanese footballer who plays for the Japanese national team and Urawa Red Diamonds as a midfielder.

Born in Ichikawa, Chiba, Abe, then a member of the JEF United Ichihara (now JEF United Ichihara Chiba) youth side, made his debut with the senior club at the age of 16 years and 333 days on 5 August 1998, at the time a record for the youngest Japanese professional player and J-League. He went on to become JEF United's captain, and led the club to the 2005 and 2006 J. League Cup titles while being named to the league's Best Eleven during the span. 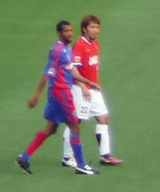 On 22 January 2007, Abe joined Urawa, the defending J. League and Emperor's Cup champions, for a transfer fee of around ¥360 million (around $3 million), a record amount for a Japanese player in a domestic deal.[2]

Abe helped Urawa to win the AFC Champions League 2007. He scored once in the second leg of the final against Iran's Sepahan F.C..[3] Abe participated in the 2007 FIFA Club World Cup playing for Urawa who eventually lost to A.C. Milan. Urawa finished in third place.

On 26 August 2010, Abe was signed by English Championship club Leicester City,[4] signing a three-year contract.[5] He made his debut in a 2-1 league win over Cardiff City on 14 September,[6] scoring his first goal for the club in a 4-2 win over Ipswich Town on 7 May 2011.[7] His last league goal for the club was in a 1-0 win over Brighton on 17 September 2011.[8] Suffering from homesickness, Abe's contract was cancelled by mutual consent on 22 January 2012 and he returned to Japan to re-join former club Urawa Reds.[9]

Abe made his senior national team debut on 29 January 2005, in a friendly match against Kazakhstan and scored his first national team goal on 6 September 2006 against Yemen in a 2007 AFC Asian Cup qualification match. He was not selected to Japan's 2006 FIFA World Cup team, but he has become a regular under his former JEF United coach Ivica Osim, who took over as the national team head coach after the World Cup. He had previously represented Japan at the Under-20 and Under-23 levels, appearing in all three first round matches at the 2004 Olympics and scoring a goal against Italy. He appeared in all of Japan's games at the 2010 FIFA World Cup. Despite missing out on Japan's 2011 Asian Cup victory, on 29 March 2011 he played 45 minutes against the J-League All Stars. On 4 August 2011 Abe was announced in the Japan squad to play South Korea.