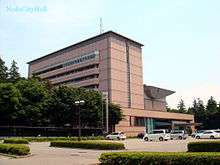 Noda is located in the far northwestern corner of Chiba Prefecture.

The area around Noda has been inhabited since prehistory, and archaeologists have found ancient shell middens in the area. During the late Heian period, the area was controlled by Kamakura Gongorō Kagemasa, and a succession of minor warlords during the Sengoku period. During the Edo period, Noda developed as a river port, post town on the pilgrimage road to Nikko, and a center for the production of soy sauce. Neighboring Sekiyado was controlled by the Late Hojo clan during the Sengoku period, and developed as a castle town under Sekiyado Domain, a feudal han under the Tokugawa shogunate.

After the Meiji Restoration, Noda and Sekiyado towns were created on April 1, 1889. Noda was elevated to city status on May 3, 1950.

On June 6, 2003, the town of Sekiyado (from Higashikatsushika District) was merged into Noda.

Noda is a regional commercial center and, due to its proximity, a bedroom community for nearby Chiba and Tokyo. Noda has a mixed economy, with Kikkoman soy sauce being the most prominent employer. There is some residual agriculture, primarily of edamame, for which Noda was historically famous.