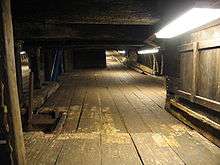 The orlop of the Swedish 17th century warship Vasa looking toward the bow.

The orlop is the lowest deck in a ship (except for very old ships). It is the deck or part of a deck where the cables are stowed, usually below the water line.[1] It has been suggested the name originates from "overlooping" of the cables.

It has also been suggested that the name is a corruption of "overlap", referring to an overlapping, balcony-like half deck occupying a portion of the ship's lowest deck space. According to the Oxford English Dictionary, the word descends from Dutch overloop from the verb overlopen, "to run (over); extend".[2]