This article is about the ship compartment. For other uses, see Bilge (disambiguation). 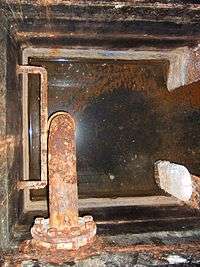 Bilge compartment in a steel hulled ship (looking down).

The bilge (IPA: /bɪldʒ/) is the lowest compartment on a ship, below the waterline, where the two sides meet at the keel. The first known use of the word is from 1513.[1]

The word is sometimes also used to describe the water that collects in this area. Water that does not drain off the side of the deck drains down through the ship into the bilge. This water may be from rough seas, rain, leaks in the hull or stuffing box, or other interior spillage. The collected water must be pumped out to prevent the bilge from becoming too full and threatening to sink the ship.

Bilge water can be found aboard almost every vessel. Depending on the ship's design and function, bilge water may contain water, oil, urine, detergents, solvents, chemicals, pitch, particles, and other materials. Discharge of bilge liquids may be restricted and for commercial vessels is regulated under Marpol Annex I.

By housing water in a compartment, the bilge keeps these liquids below decks, making it safer for the crew to operate the vessel and for people to move around in heavy weather.

Methods of removing water from bilges have included buckets and pumps. Modern vessels usually use electric bilge pumps controlled by automated bilge switches. Bilge coatings are applied to protect the bilge surfaces. The water that collects is often noxious, and "bilge water" or just "bilge" has thus become a derogatory colloquial term used to refer to something bad, fouled, or otherwise offensive.

Bilges may contain partitions to damp the rush of water from side to side and fore and aft to avoid destabilizing the ship due to the free surface effect. Partitions may contain limber holes to allow water to flow at a controlled rate into lower compartments.[2]

Cleaning the bilge and bilge water is also possible using "passive" methods such as bioremediation, which uses bacteria or archaea to break down the hydrocarbons in the bilge water into harmless byproducts.[3] Of the two general schools of thought on bioremediation, the one that uses beneficial microbes local to the bilge is regarded as being more "green" because it does not introduce foreign bacteria to the waters that the vessel sits in or travels through. But archaea that are non-indigenous, all-natural and non-GMO also can be used and discharged, since the archaea will die off anyway, leaving only local indigenous microbes remaining.[4]

Large commercial vessels need bilge alarms to notify the crew how much and where the bilge is rising.[5] These bilge alarms are electric devices that are also designed to detect leakages in the ship early before major damage is done to the vessel. Oil content meters are sometimes referred to as bilge alarms.