The Treaty of Washington was a treaty signed and ratified by the United Kingdom and the United States in 1871 during the presidency of Ulysses S. Grant that settled various disputes between the countries, in particular the Alabama Claims. It had a significant effect on the United States' long-term relationship with Canada, and Britain, establishing international law between these countries. [1] 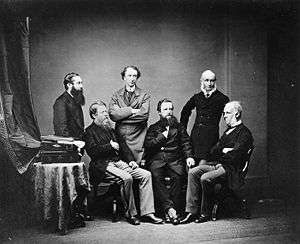 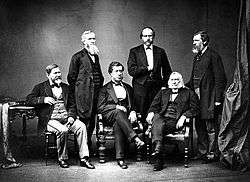 In early 1871, the British government sent Sir John Rose to the United States to ascertain whether negotiations to settle the Northwestern boundary dispute would be acceptable to President Ulysses S. Grant. The U.S. government through the adroit and diplomatic abilities of Grant's Secretary of State, Hamilton Fish, cordially received his advances and, on January 26, Sir Edward Thornton, the British Minister at Washington formally proposed the appointment of a joint high commission to meet in Washington to resolve the dispute.[1] The United States readily consented, provided that the differences growing out of the Civil War be among the subjects to be considered.[1] The British government promptly accepted the American proviso and the president appointed commissioners.

Although the treaty was signed in the name of the British Empire, Macdonald's presence established that the newly formed Dominion of Canada would at least take part in settling foreign matters that affected it directly, especially with respect to dealings with the United States. The joint commission entered at once upon its task and on 8 May concluded a treaty which received the prompt approval of the two governments. Aside from the settlement of the dispute growing out of the so-called Alabama Claims, provision was made for the adjustment of the differences with regard to the northeastern fisheries by the appointment of a mixed commission to meet at Halifax and pass upon the relative value of certain reciprocal privileges granted each of the contracting parties. In 1877, the Halifax Fisheries Commission appointed under the Treaty directed the United States to pay $5,500,000 to the British Government as compensation. Finally, provision was made for submitting to the arbitration by William I, German Emperor, of the Pig War dispute concerning the maritime boundary in Puget Sound.[1] Thus, the treaty profoundly affected International Law, with subsequent effects upon the 1878 Congress of Berlin.

At Geneva, in 1872, the United States was awarded $15,500,000 pursuant to the terms of the treaty, and the British apologized for the destruction caused by the British-built Confederate ships, while admitting no guilt.

Compensation for the Fenian raids was not included, and American fishermen were given rights to fish in Canadian waters. This greatly irritated Macdonald, but he nonetheless signed the treaty under the argument that he must as a junior member of the British delegation. The treaty was published in the Canadian press to widespread condemnation, but Macdonald remained silent on the issue. When it came time to debate the treaty in the Canadian House of Commons, he revealed that he had been secretly negotiating for a better deal, and had obtained a cash payment from the Americans for the use of Canadian fishing grounds, and in lieu of any claim against the United States over the Fenians. Furthermore, the British had agreed to a guaranteed loan of £4,000,000 for the construction of the Canadian Pacific Railway. This masterstroke of diplomacy and statecraft allowed an otherwise deeply unpopular treaty to be ratified by the Canadian Parliament.

The scholar of international law John Bassett Moore called this treaty "the greatest treaty of actual and immediate arbitration the world has ever seen." The so-called rules of Washington agreed upon by the contracting parties for the guidance of the tribunal in the interpretation of certain terms used in the treaty, and of certain principles of international law governing the obligations of neutrals, are:

Those rules affected the 1878 Congress of Berlin. Also,this precedent grew into the League of Nations and the United Nations.

In agreeing to Macdonald's inclusion to the British delegation as well as his title of prime minister of the Dominion of Canada, the treaty also had the effect of de facto recognition by the United States of the Dominion.

Supporters of British English at the time strongly condemned the use of split infinitives in English. Northcote, one of the British commissioners, informed those present that the British home office had telegraphed that they were unwilling to compromise on one notable point: that in the body of the treaty itself, there must be no words inserted between the preposition "to" and a verb.[2][3][4]