The cottage was originally owned by Joseph William Drexel, a New York banker and friend of Grant, and Grant would spend the last six weeks of his life there. Author and publisher Mark Twain gave Grant a $25,000 advance to write his memoirs; Grant completed the manuscript just three days before he died. During the next two years, sales of the work netted his family nearly $450,000 in royalties, saving his widow, Julia, from destitution. For decades after his death, thousands of Civil War veterans made a pilgrimage to this shrine outside Saratoga Springs. Thousands more visit Mt. McGregor annually to see the original artifacts preserved at this historic site.[2]

Visitors can tour the historic house museum which has been furnished exactly as it was on the day Grant died. Some of the original floral arrangements from the funeral are on display, and the bed in which he died is shown in the bedroom. Also seen is the clock that was at the cottage, stopped at 8:03am by Frederick Dent Grant, who then reached over and touched his father's forehead for the last time. A marker is located outside the cottage on the spot where Grant had his last look of the valley; it had to be fenced off to stop visitors from chipping off pieces as souvenirs. A visitor center and gift shop are also located there. A plaque is located a short distance away from the cottage and memorializes the fact that Grant died there. A New York historic marker is located a few yards from the cottage.[3] 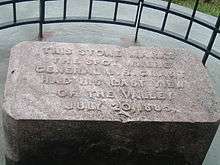