Umbro is an English sportswear and football equipment supplier based in Cheadle, Greater Manchester. Umbro designs, sources, and markets football-related apparel, footwear, and equipment. Its products are sold in over 90 countries worldwide. Since 2012, the company has been a subsidiary of American company Iconix Brand Group.[1]

The company was founded by Harold Humphreys, along with his brother Wallace in a small workshop in Wilmslow, Cheshire, inspired by the growing interest in football witnessed nationwide. The name "Umbro" is a quasi-portmanteau inspired by Humphreys Brothers Clothing. Umbro's kit debut was in the 1934 FA Cup final, when both teams Manchester City and Portsmouth wore kits designed and manufactured by the company. Other teams supplied by Umbro during the 1930s and 1940s were Sheffield United, Preston North End, Manchester United and Blackpool.

Umbro was the official sports manufacturer of the English FA Cup and official sponsor of The FA, being the exclusive supplier of balls to the body's leagues.

In 1952, the British team at the Summer Olympics wore Umbro kits, tailored for the needs of their individual sports. Umbro would supply kits for the British Olympics team for the next 20 years.

In 1957, Umbro entered the tennis market, producing sports clothing in collaboration with player Ted Tinling. This collaboration extended for three decades. Another sportsman who collaborated with Umbro was Manchester United manager Matt Busby, in 1959. That same year the company started to sell its junior boys' kits, a set of shirt, shorts and socks that would allow young players to wear the same look as their footballing idols.

Brazil became the first FIFA World Cup champion to wear kits by Umbro in 1958. Two years later, Manchester United Scottish player Denis Law signed an exclusive agreement with the brand, becoming the first footballer to be sponsored by Umbro. The England national team won its only title in 1966 wearing kits by Umbro (the deal had been signed in 1954). Of the 16 teams that competed, 15 wore kit manufactured by Umbro,[2] the only exception being the USSR. At the same time, 85% of British football teams wore kits by the company, including Celtic, the first British team to win a European Cup in 1967. Liverpool FC won the first four of their five European Cups while wearing Umbro kits, in 1977, 1978, 1981 and 1984.

In 1974, Umbro's founder, Harold Humphreys, died. His sons John and Stuart took over the running of the company. The England national team wore Umbro shirts by choice until 1974, until The Football Association, encouraged by the England manager Don Revie, sold the jersey manufacturing rights to Admiral Sportswear.

After more than a decade wearing Admiral kits, the England national team signed with Umbro again in 1984. In 1986, Umbro began to manufacture its own football boots. The company added footballers Alan Shearer and Michael Owen (who was only 14 years old) to its list of sponsored athletes. In 1994, Brazil won its fourth FIFA World Cup title in the United States and club teams AFC Ajax (in 1995), and Manchester United (in 1999) obtained the UEFA Champions League and the Intercontinental Cup, in Tokyo, all of them wearing Umbro kits.

In October 2007, JJB Sports bought a 10.1% stake in Umbro in a move to protect its stake in the market for England football shirts.[4]

On 23 October 2007, it was announced Umbro had agreed to be bought by Nike in a deal worth GB£285 million, the equivalent of 193p per share. The Umbro board recommended to its shareholders they vote in favour of the approach, as it offered a very competitive price for the business. Umbro's share price at the time of the offer was close to 130p.[5] The deal was approved by regulators in December 2007 and concluded in February 2008.[6] With the objective of revitalising the brand, Umbro launched the "Tailored by England" lines. As of 4 June 2009, Umbro signed a deal with Manchester City to supply kits for the team. Wearing Umbro kits, Manchester City won its first championship in 35 years.[7]

In May 2012, Nike reported that they would be selling Umbro (along with Cole Haan) in order to focus on their sports brands, including Nike, Converse, Hurley and Air Jordan.[9] In September 2012, The FA announced that future England kits would be manufactured by Nike.[10][11][12]

In February 2014, it was announced that Umbro would supply Everton from the start of the 2014–15 football season.[16] This was the first new club announcement since Iconix Brand Group bought Umbro, and was followed by the announcement of similar deals with Hull City and French clubs Lens and Nantes. On 9 June 2014, Derby County announced that their kits for the 2014–15 season would be made by Umbro.

In February 2015, Dutch Eredivisie champions PSV announced a new kit deal with Umbro, replacing PSV's previous deal with Nike, which had been in existence since 1994. The deal coincided with PSV's return to the UEFA Champions League after a six-year absence.[17]

In late April 2015, West Ham United announced a new five-year agreement with Umbro as the club's official technical partner. This agreement included creating a commemorative kit for the Hammers' final year in the historic Boleyn Ground.[18]

In May 2016, it was announced that Umbro had become the technical sponsor of Blackburn Rovers[20] in a five-year deal.

Umbro currently manufactures all types of sportswear apparel, including training gear and football boots. Until the mid-1980s, the company manufactured only sports clothing, in particular football jerseys, shorts and socks, but had no footwear range. Eventually, in 1985, Umbro decided to introduce its first football boot into the Brazilian market. This design, cheaper than the products of existing boot brands such as Adidas, proved popular and went into mass production internationally two years later.

Umbro also manufactured a popular style of shorts that reached its peak in the United States in the late 1980s and early 1990s. They were made of nylon, had a drawstring waistband, and often came in bright colours. With the growth of youth football leagues in the U.S. in the 1980s, many youths, teens and young adults began wearing them as everyday clothing. At the height of the "Umbro fashion," other brands of football shorts, such as Adidas, Diadora, Hummel, Lotto and Mitre, also became popular. Its major competitors in this market include Adidas, Nike, Lotto, Puma and fellow North West England manufacturer Reebok.

Other releases by Umbro include the Stealth boot,[21] released in 2010 and worn by players such as Gaël Clichy and Phil Jagielka. The same year, the company released the GT, worn by then-Fulham striker Darren Bent. The company announced it as "its lightest ever boot." This was succeeded by the GT II model.[22] June 2011 saw the release of the Umbro Geometra Pro.[23] In 2013, Umbro introduced to a new wave of releases that included the Speciali IV and the Geometra II.[24]

Following the purchase of the brand by Iconix Brand Group in 2013, the first major product release from Umbro was the UX-1,[25] a technologically advanced football boot which was voted as one of the best new releases of the year.[26]

Umbro is the official supplier and sponsor of numerous association football teams, players and associations, including: Universitario de Deportes for 2016 "Umbro.com".

Umbro is the Official football supplier for the following leagues and associations: 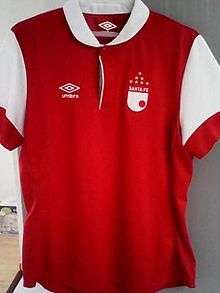