Not to be confused with Kingdom of Sikkim.

The Sikh Empire (also Sikh Khalsa Raj, Sarkar-i-Khalsa or Punjab Empire), was a major power in South Asia, that arose under the leadership of Maharaja Ranjit Singh who established a secular empire[3] basing it around the Punjab. The empire existed from 1799, when Ranjit Singh captured Lahore, to 1849 and was forged on the foundations of the Khalsa from a collection of autonomous Sikh misls.[4][5] At its peak in the 19th century, the Empire extended from the Khyber Pass in the west to western Tibet in the east, and from Mithankot in the south to Kashmir in the north. It was the last major region of the subcontinent to be conquered by the British.

The foundations of the Sikh Empire can be traced to as early as 1707, the year of Aurangzeb's death and the start of the downfall of the Mughal Empire. With the Mughals significantly weakened, the Sikh army, known as the Dal Khalsa, a rearrangement of the Khalsa inaugurated by Guru Gobind Singh, led expeditions against them and the Afghans in the west. This led to a growth of the army which split into different confederacies or semi-independent misls. Each of these component armies controlled different areas and cities. However, in the period from 1762 to 1799, Sikh commanders of the misls appeared to be coming into their own as independent warlords.

The formation of the empire began with the capture of Lahore, by Ranjit Singh, from its Afghan ruler, Zaman Shah Durrani, and the subsequent and progressive expulsion of Afghans from the Punjab, by defeating them in the Afghan-Sikh Wars, and the unification of the separate Sikh misls. Ranjit Singh was proclaimed as Maharaja of the Punjab on 12 April 1801 (to coincide with Vaisakhi), creating a unified political state. Sahib Singh Bedi, a descendant of Guru Nanak, conducted the coronation.[6] Ranjit Singh rose to power in a very short period, from a leader of a single misl to finally becoming the Maharaja of Punjab. He began to modernise his army, using the latest training as well as weapons and artillery. After the death of Ranjit Singh, the empire was weakened by internal divisions and political mismanagement. Finally, by 1849 the state was dissolved after the defeat in the Anglo-Sikh wars.

The Sikh Empire was divided into four provinces: Lahore, Multan, Peshawar, and Kashmir from 1799 to 1849.

The Harmandir Sahib, known as the Golden Temple at Amritsar

The Sikh religion began around the time of the conquest of Northern India by Babur, the founder of the Mughal Empire. His grandson, Akbar, supported religious freedom and after visiting the langar of Guru Amar Das got a favourable impression of Sikhism. As a result of his visit he donated land to the langar and the Sikh gurus enjoyed a positive relationship with the Mughals until his death in 1605.[7] His successor, Jahangir, however, saw the Sikhs as a political threat. He ordered Guru Arjun Dev, who had been arrested for supporting the rebellious Khusrau Mirza,[8] to change the passage about Islam in the Adi Granth. When the Guru refused, Jahangir ordered him to be put to death by torture.[9] Guru Arjan Dev's martyrdom led to the sixth Guru, Guru Hargobind, declaring Sikh sovereignty in the creation of the Akal Takht and the establishment of a fort to defend Amritsar.[10] Jahangir attempted to assert authority over the Sikhs by jailing Guru Hargobind at Gwalior, but released him after a number of years when he no longer felt threatened. The Sikh community did not have any further issues with the Mughal empire until the death of Jahangir in 1627. The son of Jahangir, Shah Jahan, took offence at Guru Hargobind's "sovereignty" and after a series of assaults on Amritsar forced the Sikhs to retreat to the Sivalik Hills.[10]

The next guru, Guru Har Rai, maintained the guruship in these hills by defeating local attempts to seize Sikh land and playing a neutral role in the power struggle between two of the sons of Shah Jahan, Aurangzeb and Dara Shikoh, for control of the Mughal Empire. The ninth Guru, Guru Tegh Bahadur, moved the Sikh community to Anandpur and travelled extensively to visit and preach in defiance of Aurangzeb, who attempted to install Ram Rai as new guru. Guru Tegh Bahadur aided Kashmiri Pandits in avoiding conversion to Islam and was arrested by Aurangzeb. When offered a choice between conversion to Islam and death, he chose to die rather than compromise his principles and was executed.[11]

Guru Gobind Singh assumed the guruship in 1675 and to avoid battles with Sivalik Hill rajas moved the guruship to Paunta. There he built a large fort to protect the city and garrisoned an army to protect it. The growing power of the Sikh community alarmed the Sivalik Hill rajas who attempted to attack the city but the Gobind Singh's forces routed them at the Battle of Bhangani. He moved on to Anandpur and established the Khalsa, a collective army of baptised Sikhs, on 30 March 1699. The establishment of the Khalsa united the Sikh community against various Mughal-backed claimants to the guruship.[12] In 1701, a combined army of the Sivalik Hill rajas and the Mughals under Wazir Khan attacked Anandpur. The Khalsa retreated but regrouped to defeat the Mughals at the Battle of Muktsar. In 1707, Guru Gobind Singh accepted an invitation by Aurangzeb's successor Bahadur Shah I to meet him. The meeting took place at Agra on 23 July 1707.[13]

In August 1708 Guru Gobind Singh visited Nanded. There he met a Bairāgī recluse, Madho Das, and converted him to Sikhism, giving him a new name, Banda Singh.[13][14]

Banda Singh Bahadur (also known as Lachman Das, Lachman Dev and Madho Das[14]), (1670–1716) met Guru Gobind Singh at Nanded and adopted the Sikh religion. A short time before his death, Guru Gobind Singh ordered him to reconquer Punjab region and gave him a letter that commanded all Sikhs to join him. After two years of gaining supporters, Banda Singh Bahadur initiated an agrarian uprising by breaking up the large estates of Zamindar families and distributing the land to the poor peasants who farmed the land.[15] Banda Singh Bahadur started his rebellion with the defeat of Mughal armies at Samana and Sadhaura and the rebellion culminated in the defeat of Sirhind. During the rebellion, Banda Singh Bahadur made a point of destroying the cities in which Mughals had been cruel to the supporters of Guru Gobind Singh. He executed Wazir Khan in revenge for the deaths of Guru Gobind Singh's sons and Pir Budhu Shah after the Sikh victory at Sirhind.[16] He ruled the territory between the Sutlej river and the Yamuna river, established a capital in the Himalayas at Lohgarh and struck coinage in the names of Guru Nanak and Guru Gobind Singh.[15] In 1716, his army was defeated by the Mughals after he attempted to defend his fort at Gurdas Nangal. He was captured along with 700 of his men and sent to Delhi, where they were all tortured and executed after refusing to convert to Islam.[17]

Formation of the Sikh Empire 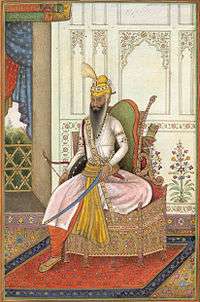 Miniature painting of Maharajah Ranjit Singh of Punjab in 1830. From Photo album of princely families in the Sikh and Rajput territories by Colonel James Skinner (1778–1841)

The formal start of the Sikh Empire began with the merger of these "Misls" by the time of coronation of Ranjit Singh in 1801, creating a unified political state. All the Misl leaders, who were affiliated with the army, were the nobility with usually long and prestigious family histories in the Sikhs' history.[4][18] The main geographical footprint of the empire was the Punjab region to Khyber Pass in the west, to Kashmir in the north, to Sindh in the south, and Tibet in the east. The religious demography of the Sikh Empire was Muslim (70%), Sikh (17%), Hindu (13%).[19] The population was 3.5 million, according to Amarinder Singh`s The Last Sunset: The Rise and Fall of the Lahore Durbar. In 1799 Ranjit Singh moved the capital to Lahore from Gujranwala, where it had been established in 1763 by his grandfather, Charat Singh.[20]

End of the Sikh Empire

After Ranjit Singh's death in 1839, the empire was severely weakened by internal divisions and political mismanagement. This opportunity was used by the British East India Company to launch the Anglo-Sikh Wars.

The Battle of Ferozeshah in 1845 marked many turning points, the British encountered the Punjab Army, opening with a gun-duel in which the Sikhs "had the better of the British artillery". As the British made advances, Europeans in their army were especially targeted, as the Sikhs believed if the army "became demoralised, the backbone of the enemy's position would be broken".[21] The fighting continued throughout the night. The British position "grew graver as the night wore on", and "suffered terrible casualties with every single member of the Governor General's staff either killed or wounded".[22] Nevertheless, the British army took and held Ferozeshah. British General Sir James Hope Grant recorded: "Truly the night was one of gloom and forbidding and perhaps never in the annals of warfare has a British Army on such a large scale been nearer to a defeat which would have involved annihilation."[22]

The reasons for the withdrawal of the Sikhs from Ferozeshah are contentious. Some believe that it was treachery of the non-Sikh high command of their own army which led to them marching away from a British force in a precarious and battered state. Others believe that a tactical withdrawal was the best policy.[23]

The Sikh empire was finally dissolved at the end of the Second Anglo-Sikh War in 1849 into separate princely states and the British province of Punjab. Eventually, a Lieutenant Governorship was formed in Lahore as a direct representative of the British Crown. 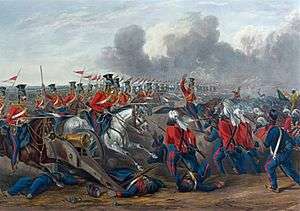 The charge of the British 16th Lancers at Aliwal on 28 January 1846, during the Anglo-Sikh war

The Punjab region was a region straddling India and the Afghan Durrani Empire. The following modern-day political divisions made up the historical Sikh Empire:

Jamrud District (Khyber Agency, Pakistan) was the westernmost limit of the Sikh Empire. The westward expansion was stopped in the Battle of Jamrud, in which the Afghans managed to kill the prominent Sikh general Hari Singh Nalwa in an offensive, though the Sikhs successfully held their position at their Jamrud fort. Ranjit Singh sent his dogra general Gulab Singh thereafter as reinforcement and he crushed the Pashtun rebellion harshly.[30] In 1838, Ranjit Singh with his troops marched into Kabul to take part in the victory parade along with the British after restoring Shah Shoja to the Afghan throne at Kabul.[31]

The Sikh Empire was idiosyncratic in that it allowed men from religions other than their own to rise to commanding positions of authority.[32]

A ban on cow slaughter, which can be related to Hindu sentiments, was universally imposed in the Sarkar Khalsaji.[33][34] Ranjit Singh willed the Koh-i-Noor diamond, which was under his possession, to Jagannath Temple in Puri, Odisha while on his deathbed in 1839.[35] Ranjit Singh also donated huge amounts of gold for the construction of Hindu temples not only in his state, but also in the areas which were under the control of the Marathas, with whom Sikhs had a cordial relation.

The Sikhs made attempt not to offend the prejudices of Muslims, noted Baron von Hügel, the famous German traveller,[36] yet the Sikhs were referred to as being harsh. In this regard, Masson's explanation is perhaps the most pertinent:

"Though compared to the Afghans, the Sikhs were mild and exerted a protecting influence, yet no advantages could compensate to their Mohammedan subjects, the idea of subjection to infidels, and the prohibition to slay kine, and to repeat the azan, or "summons to prayer".[37]