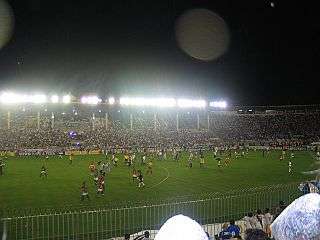 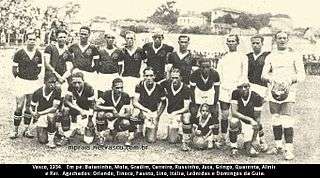 Team photo from the 1934 season

Club de Regatas Vasco da Gama (Portuguese pronunciation: [ˈvaʃku dɐ ˈɡɐ̃mɐ], Vasco da Gama Rowing Club), usually known as Vasco da Gama, is a famous traditional Brazilian multisports club from Rio de Janeiro, Brazil. It was founded on August 21, 1898 (although the professional football department started on November 5, 1915),[2] by Portuguese immigrants, and it is still traditionally supported by the Portuguese community of Rio de Janeiro. It is one of the most popular clubs in Brazil, with more than 20 million supporters.[3]

Its statute defines the club as a "sportive, recreative, educational, assistant and philanthropic non-profit organization of public utility".[4]

Their home stadium is São Januário, with a capacity of 21,880,[1] the third biggest in Rio de Janeiro (after Maracanã and Engenhão), but some matches (especially the city derbies) are played at the Maracanã (capacity of about 80,000). They play in black shirts with a white diagonal sash that contains a Cross pattée (famously, though mistakenly, identified as a Maltese cross), black shorts and black socks.

The club is named after the Portuguese explorer Vasco da Gama.

In the late 19th century rowing was the most important sport in Rio de Janeiro. At this time, four young men – Henrique Ferreira Monteiro, Luís Antônio Rodrigues, José Alexandre d'Avelar Rodrigues and Manuel Teixeira de Souza Júnior – who did not want to travel to Niterói to row with the boats of Gragoatá Club decided to found a rowing club.

Inspired by the celebrations of the 4th centenary of the first sail from Europe to India, the founders chose the name of the Portuguese explorer Vasco da Gama to baptise the new club.

Football was included only with the fusion with Lusitania Clube, other mostly Portuguese immigrants club.[5] Beginning in the smaller leagues, Vasco became champion of the league B in 1922 and ascended to league A. In its first championship in League A – in 1923, Vasco became champion with a team formed by whites, blacks and "mulattos" players of different social classes.

Fight and victory against racism

Football in Brazil back then was a sport for the elites, and Vasco da Gama's racially diverse squad didn't appease them. In 1924 Vasco da Gama was pressured by the Metropolitan League to ban some players that were not considered adequate to play in the aristocratic league, notably because they were black or mulato and/or poor. After Vasco refused to comply with such a ban, the other big teams, Fluminense, Flamengo and Botafogo, among others, created the Metropolitan Athletic Association and prohibited Vasco from participating unless it complied with the racist demands.

The former President of Vasco, José Augusto Prestes answered with a letter that became known as the Historic Answer (resposta histórica),[6] which revolutionized the practice of sports in Brazil. After a few years, the racism barriers fell. Vasco da Gama had led the move toward a more inclusive soccer culture, forward-thinking not employed by leaders from Fluminense, Flamengo and Botafogo.

Even though the club was not the first to field black players, it was the first one to win a league with them, which led to an outcry to ban "blue-collar workers" from playing in the league - a move that in practice meant barring blacks from playing.

In 1925 Vasco was readmitted into the "elite" league, with its black and mulatto players. By 1933, when football became professional in Brazil, most of the big clubs had black players in them.

The Victory Express and the South American Club championship

Between 1947 and 1952, the club was nicknamed Expresso da Vitória (Victory Express), as Vasco won several competitions in that period, such as the Rio de Janeiro championship in 1945, 1947, 1949, 1950, and 1952, and the South American Club Championship in 1948. Players such as Ademir, Moacyr Barbosa, Bellini and Ipojucan defended Vasco's colors during that period.

Pelé scored his 1,000th professional goal against CR Vasco on 19 November 1969, in front of 65,157 spectators.[7] The goal, popularly named O Milésimo (The Thousandth), occurred in a match against Vasco, when Pelé scored from a penalty kick, at the Maracanã Stadium.[8]

By winning the 1998 Copa Libertadores, Vasco entered the inaugural 2000 FIFA Club World Championship held in Brazil. They beat Manchester United, Necaxa and South Melbourne in the group stage to reach the final, it finished 0–0 after extra time in an all-Brazilian clash with Corinthians but lost 3–4 in the penalty shootout.

Also in 2000, Vasco won the Copa Mercosur against Palmeiras in a historical match. Losing 0–3 in the end of first-half, with Palmeiras scoring 2 goals in less than a minute. Vasco managed to score 3 goals and drew the game, 3–3. In the 93" Romário scored a decisive goal and Vasco won the match (4-3).[9] Still today the match is considered the best game played in Brazil in history.[10]

Vasco won the Copa João Havelange in 2000. Seen as controversial competition organized by Clube dos 13 rather than CBF, Vasco challenged São Caetano drawing the game by 1–1 when a disaster happened in São Januário Stadium. It won the second game beating São Caetano by 3–1. 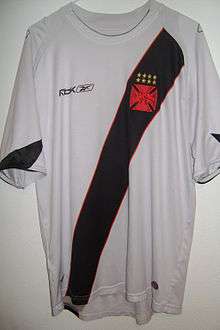 The team finished the championship in a disastrous 18th place and was relegated to the second division of the championship for the first time since its foundation, 110 years before. Up until the relegation, it was one of the only six clubs to have never been removed from the first division, along with Internacional, Cruzeiro, Flamengo, Santos and São Paulo,[11] though the last two (even they never played any of the lower divisions), didn't participate in the 1979 Brazilian Championship's 1st division,[11] in order to avoid conflicts with Paulista Championship schedule.

After failing to win the Copa do Brasil, Vasco da Gama found success in 2011, lifting that year's trophy. Victory came against Coritiba in the 2011 Copa do Brasil final. Vasco came second in the 2011 Brazilian Série A, enjoying an excellent campaign. The club also ended the year as semifinalists in the Copa Sudamericana, a competition that saw the club defeat Palmeiras, Aurora and Universitario in historic fashion before being eliminated by Universidad de Chile, the other top two team in South America at the time. The season was dubbed the "Redemption Year of Vasco da Gama", with many lauding Vasco as one of Brazilian football's elite teams once again.

In 2012, Vasco was a finalist in the two final rounds of the Campeonato Carioca, after beating Flamengo in the two semifinals. The main competition of Vasco in the year was the Copa Libertadores of America. After a good campaign the team was eliminated in the quarterfinals by Corinthians, with a goal at 43 of the second half. In the Brazilian Championship, the team set the record for 54 consecutive rounds in the G4 (counting Brazilian in 2011 and 2012), although they did not win the place for the Libertadores the following year.

Although best known as a football, rowing and swimming club, Vasco da Gama is actually a comprehensive sports club. Its basketball section, CR Vasco da Gama Basquete (twice Brazilian champion and twice South-American champion) produced current NBA player Nenê. The club is also the first Brazilian club to play against a NBA team. In 1999, the club played the McDonald's Championship final against San Antonio Spurs. Its rowing team is one of the best of Brazil. Its swimmers regularly represent Brazil in international competitions. And Vasco da Gama is present in many other sports.

As of 3 August 2016, according to combined sources on the official website.[12]

Most goals in a season

Vasco's biggest rivals are from the same city: Fluminense, Botafogo and Flamengo, with the latter being its biggest rival. The games between Vasco and Flamengo ("Millions Derby") are the most watched in Brazil. The matches are usually played in the Maracanã, and reunite two of the biggest crowds of Rio de Janeiro.[28] 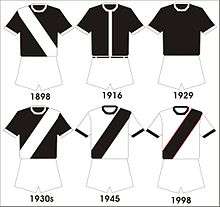 Vasco da Gama is one of the oldest Brazilian clubs and has had several different kits in its history. Vasco da Gama's first kit, used in rowing, was created in 1898, and was completely black, with a left diagonal sash.

Vasco da Gama's first football kit, created in 1916, was completely black, and was easily identified because of the presence of a white tie and a belt.

In 1929, the club's kit was changed. The tie and the belt were removed. However, the kit remained all-black.

In the 1930s, the home kit's color was changed again. The kit became black with a white right diagonal sash.

In 1945, the kit's color was changed to white, and a black diagonal sash was introduced. The sash was introduced because the club's manager at the time, the Uruguayan Ondino Viera liked the sash used in his previous club's kit, River Plate, of Argentina, and adopted this pattern in Vasco da Gama's away kit. So, both kits had a right diagonal sash.[29]

In 1988, the sash located on the back of the shirt was removed.

In 1998, the kit design was changed again. This kit became very similar to the 1945 one. However, a thin red line was placed around the sash.

Vasco has currently three kits. The home shirt's main color is black, with a white sash. The short and the socks are black. The away kit is similar to the home kit, but the main color is white, the sash is black, and the shorts and socks are white. In 2009–10 the third kit was all white, with a red "cross of the Knights Templar". In 2010, the away kit changes to black in honor to the 1923's team, which gave up playing for having black players, which were not allowed to play with white players at that time. This was one of the most important steps in the club's history, the fight against racism and discrimination. The nowadays third kit brings the symbol of an open hand with "Respect & Equality" in the left chest, and "Democracy and Equality" in the shirt collar.[30]

Since July 2009, after breaking the partnership with Champs,[31] the official jerseys are produced by Penalty.[32]

Vasco's official anthem was composed in 1918, by Joaquim Barros Ferreira da Silva, it was the club's first anthem.[33] There is another official anthem, created in the 1930s, called Meu Pavilhão (meaning My Pavilion), which lyrics were composed by João de Freitas and music by Hernani Correia. This anthem replaced the previous one. The club's most popular anthem, however, is an unofficial anthem composed by Lamartine Babo in 1942.

Vasco da Gama is the second most supported football club in Rio de Janeiro, and varies between the third and fifth most supported in Brazil. The club's support is very diverse stretching across social class lines, however the core of most the Vasco da Gama support lies within the working class of the Northern Zone of Rio de Janeiro and Rio outskirt cities like Niterói. Vasco da Gama have significant support in other regions in Brazil notably the Northeastern and North regions as well as stongholds in southern Minas Gerais, Espirito Santo and in Santa Catarina (in South Region). Vasco also have a huge support in Distrito Federal.