Since October 2010 the Executive Director is Joan Clos, former mayor of Barcelona and Minister of Industry, Tourism and Trade of the Government of Spain. 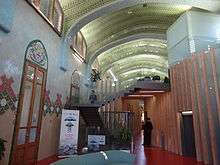 UN-Habitat works in more than 70 countries in five continents focusing on seven areas:

The World Urban Forum is an international conference dedicated to urban issues, organized by UN-Habitat. It was established by the United Nations to examine one of the most pressing issues facing the world today: rapid urbanization and how to ensure a sustainable urban development.It is organized biennially in the years between the UN-Habitat governing councils.

The World Urban Campaign is the world living platform on cities for sharing and learning on initiatives, actions and policies driving positive change towards sustainable urbanization. Coordinated by UN-Habitat, it is a global coalition of public, private and civil society partners seeking to raise the urban agenda. The campaign is UN-Habitat's partners' platform for the preparation of the Third United Nations Conference on Housing and Sustainable Urban Development (Habitat III) to be held in 2016.

The United Nations has designated the first Monday of October every year as World Habitat Day. This is an occasion to reflect on the state of our towns and cities and the basic right of all too adequate shelter. It is also intended to remind the world of its collective responsibility for the future of human habitat.

The UN-Habitat Scroll of Honour Award is an award given by the United Nations Human Settlements Programme in recognition of work carried out in the field of human settlements development. The aim of the award is to honour individuals and institutions instrumental in improving the living conditions in urban centres around the world.