"UNHCR" redirects here. It is not to be confused with UNHRC, the United Nations Human Rights Council.

The Office of the United Nations High Commissioner for Refugees (UNHCR), also known as the UN Refugee Agency, is a United Nations programme mandated to protect and support refugees at the request of a government or the UN itself and assists in their voluntary repatriation, local integration or resettlement to a third country. Its headquarters are in Geneva, Switzerland, and it is a member of the United Nations Development Group.[1] The UNHCR has won two Nobel Peace Prizes, once in 1954 and again in 1981.[2]

Office of the United Nations High Commissioner for Refugees

In the late 1940s, the IRO fell out of favor, but the UN agreed that a body was required to oversee global refugee issues. Despite many heated debates in the General Assembly, the United Nations High Commissioner for Refugees was founded as a subsidiary organ of the General Assembly by Resolution 319 (IV) of the United Nations General Assembly of December 1949. However, the organization was only intended to operate for 3 years, from January 1951, due to the disagreement of many UN member states over the implications of a permanent body.[3]

UNHCR's mandate was originally set out in its statute, annexed to resolution 428 (V) of the United Nations General Assembly of 1950. This mandate has been subsequently broadened by numerous resolutions of the General Assembly and its Economic and Social Council (ECOSOC).[3] According to UNHCR,

[its] mandate is to provide, on a non-political and humanitarian basis, international protection to refugees and to seek permanent solutions for them.[3]

Soon after the signing of the 1951 Convention relating to the Status of Refugees, it became clear that refugees were not solely restricted to Europe. In 1956, UNHCR was involved in coordinating the response to the uprising in Hungary. Just a year later, UNHCR was tasked with dealing with Chinese refugees in Hong Kong, while also responding Algerian refugees who had fled to Morocco and Tunisia in the wake of Algeria's war for independence. The responses marked the beginning of a wider, global mandate in refugee protection and humanitarian assistance.[3]

Decolonization in the 1960s triggered large refugee movements in Africa, creating a massive challenge that would transform UNHCR; unlike the refugee crises in Europe, there were no durable solutions in Africa and many refugees who fled one country only found instability in their new country of asylum. By the end of the decade, two-thirds of UNHCR's budget was focused on operations in Africa and in just one decade, the organization's focus had shifted from an almost exclusive focus on Europe.[3]

In the 1970s, UNHCR refugee operations continued to spread around the globe, with the mass exodus of East Pakistanis to India shortly before the birth of Bangladesh. Adding to the woes in Asia was the Vietnam war, with millions fleeing the war-torn country.[3]

The 1980s saw new challenges for UNHCR, with many member states unwilling to resettle refugees due to the sharp rise in refugee numbers over the 1970s. Often, these refugees were not fleeing wars between states, but inter-ethnic conflict in newly independent states. The targeting of civilians as military strategy added to the displacement in many nations, so even 'minor' conflicts could result in a large number of displaced persons. Whether in Asia, Central America or Africa, these conflicts, fueled by superpower rivalry and aggravated by socio-economic problems within the concerned countries, durable solutions continued to prove a massive challenge for the UNHCR. As a result, the UNHCR became more heavily involved with assistance programs within refugee camps, often located in hostile environments.[3]

The end of the Cold War marked continued inter-ethnic conflict and contributed heavily to refugee flight. In addition, humanitarian intervention by multinational forces became more frequent and the media began to play a big role, particularly in the lead up to the 1999 NATO mission in Yugoslavia, while by contrast, the 1994 Rwandan Genocide had little attention. The genocide in Rwanda caused a massive refugee crisis, again highlighting the difficulties for UNHCR to uphold its mandate, and the UNHCR continued to battle against restrictive asylum policies in so called 'rich' nations.[3] 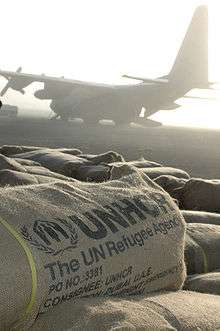 UNHCR was established on 14 December 1950[5] and succeeded the earlier United Nations Relief and Rehabilitation Administration. The agency is mandated to lead and co-ordinate international action to protect refugees and resolve refugee problems worldwide. Its primary purpose is to safeguard the rights and well-being of refugees. It strives to ensure that everyone can exercise the right to seek asylum and find safe refuge in another state, with the option to return home voluntarily, integrate locally or to resettle in a third country.

UNHCR's mandate has gradually been expanded to include protecting and providing humanitarian assistance to whom it describes as other persons "of concern," including internally displaced persons (IDPs) who would fit the legal definition of a refugee under the 1951 United Nations Convention Relating to the Status of Refugees and 1967 Protocol, the 1969 Organization for African Unity Convention, or some other treaty if they left their country, but who presently remain in their country of origin. UNHCR presently has major missions in Lebanon, South Sudan, Chad/Darfur, Democratic Republic of Congo, Iraq, Afghanistan as well as Kenya to assist and provide services to IDPs and refugees in camps and in urban settings.

To achieve its mandate, the UNHCR engaged in activities both in the countries of interest and in countries with donors. For example, the UNHCR hosts expert roundtables to discuss issues of concern to the international refugee community.

Main article: United Nations Relief and Works Agency for Palestine Refugees in the Near East

Most Palestinian refugees – those in the West Bank, Gaza Strip, Lebanon, Syria, and Jordan – do not come within the responsibility of the UNHCR, but instead come under an older body, the United Nations Relief and Works Agency for Palestine Refugees in the Near East (UNRWA). The UNRWA has a much broader definition of "refugee" than the UNHCR, including not only refugees themselves but their descendants in perpetuity; however, it only covers refugees stemming from the 1948 and 1967 Arab-Israeli wars. Other Palestinian refugees outside of UNRWA's area of operations do fall under UNHCR's mandate, if they meet the UNHCR's more limited definition of refugee.

Several new programs have recently been introduced to support and to heighten awareness of the issues faced by refugees around the world. These two new programs are a product of the benchmarks set out by the United Nations Millennium Development Goals.

The UNHCR works in different regions of the world to raise awareness about the refugee crisis and the needs of these refugees.

Since 2009, the UNHCR acknowledged a large presence of migration and refugees in the Caribbean, where the refugee crisis remained largely unreported.[6] Many refugees in search for asylum in the United States are unable to reach their destination and end up in the Caribbean.[7] However, migrant laws in most of these nations lacked any protections for asylum-seekers, even the ability to be recognized as a refugee or asylum seeker itself.[6] The UNHCR organized talks with these nations in Costa Rica in 2009,[7] in an effort to bring forward the lack of protections for refugees, who are often labeled as "illegal" [6] and prosecuted as unauthorized migrants.

In 2007, UNHCR offices in Canada launched an aggressive media campaign to shed light on the plight of refugees.[8] This campaign was meant to humanize the refugee crisis by showing refugees living in the midst of disturbing conditions. Using emotional appeals to raise public awareness, the campaign hoped to increase the interest of particularly "30 to 45-year-old professionals who are generally well educated, well read, but have not had direct experience or knowledge of refugee issues,”[8] according to fund-raising officer Jonathan Wade.

In Ireland, the UNHCR works to inform the public through different channels. The UNHCR in Ireland actively pursues media relations and "[they] supply the media with accurate and reliable information coupled with our unique insight based on our refugee protection mandate and role as one of the world’s leading humanitarian agencies".[9] It also engages its community by holding public events in aims of informing people of current refugee crises. One of these is the Annal UNHCR/SARI Fair play Football Cup.[9]

Cooperation within the United Nations

As UNHCR is a program governed by the UN General Assembly, and the UN Economic and Social Council, it cooperates with many other programs and agencies under the United Nations in order to effectively protect the rights of refugees.

On 19 September 2016, UN General Assembly hosted the UN Summit for Refugees and Migrants, a high-level summit to address large movements of refugees and migrants, with the aim of bringing countries together behind a more humane and coordinated approach.[10] Leaders of the UN High Commissioner for Human Rights, UN Entity for Gender Equality and the Empowerment of Women, UN Office on Drugs and Crime, and The World Bank were present. The summit addressed the root causes and drive for migration and the necessity of global cooperation. As a result of this summit, the United Nations unveiled a draft set of principles that urge the international community to build on the momentum set by the adoption of the New York Declaration for Refugees and Migrants. Specifically, the 20 draft principles focus on human rights; non-discrimination; rescue and assistance; access to justice; border governance; returns; violence; detention; family unity; child migrants; women migrants; right to health; adequate standard of living; decent work; right to education; right to information; monitoring and accountability; migrants’ human rights defenders; data; and international cooperation.[11]

On 28 September 2016, the UNHCR partnered with the UN Food and Agricultural Organization in Tehran for the Solutions Strategy for Afghan Refugees. FAO highighted the contributions to be made by FAO towards SSAR obejctives on livelihood related activities including livestock and fishery initiatives as well as nutritional projects in Iranian schools.

FAO and UNHCR are committed towards increasing refugees’ access to livelihood opportunities and reducing dependency on humanitarian aid. Of late, a joint livelihood strategy for South Sudan was launched looking to address this issue with a clearly defined action plan. The strategy targets both refugees (70 percent) and local communities (30 percent) in refugee-hosting areas across the country.[12]

Since 1954, the UNHCR Nansen Refugee Award has been annually awarded to a person or an organization in recognition of outstanding service to the cause of refugees, displaced or stateless people.

The UNHCR itself was awarded the Nobel Peace Prize in 1954 and 1981.The UNHCR has been chosen for the prestigious Indira Gandhi Prize for Peace, Disarmament and Development 2015.

Persons of concern to UNHCR

The UNHCR's Mid-Year Trends report of June 2015 (based on information for mid-2015 or latest available information up to that date) reported an "unprecedented" 57,959,702 individuals falling under its mandate (for reference, on January the 1st, 2007, 21,018,589 people - or less than half of the number in 2015 - fell under the mandate of the UNHCR). The sharp increase was mainly attributed to the Syrian Civil War, "with the outbreak of armed crises or the deterioration of ongoing ones in countries like Afghanistan, Burundi, Democratic Republic of the Congo, Mali, Somalia, South Sudan and the Ukraine contributing to prevailing trends."[13]

Persons of concern include refugees and asylum-seekers, people in refugee-like conditions, internally-displaced people (IDPs), stateless persons and "others of concern to the UNHCR".

Sorted by the UNHCR bureau in which asylum is sought, the number for June 2015 included: 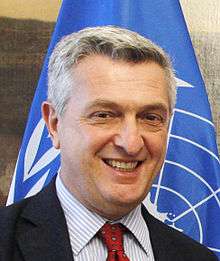 Filippo Grandi holds the post of High Commissioner since January 2016

After 10 years serving as a Goodwill Ambassador, Angelina Jolie was promoted in 2012 to Special Envoy to the High Commissioner. In this role she represents the UNHCR and High Commissioner Filipo Grandi at the diplomatic level and works to facilitate long-term solutions for people displaced by large-scale crises, such as Afghanistan and Somalia. "This is an exceptional position reflecting an exceptional role she has played for us," said a UNHCR spokesman.

UNHCR is also represented by a number of UNHCR Goodwill Ambassadors, who at present are: