The Obelisco and the Washington Monument, iconic symbols of both Buenos Aires and Washington.

The Argentine Republic and the United States of America have maintained bilateral relations since the United States formally recognized the United Provinces of the Río de la Plata, the predecessor to Argentina, on 27 January 1823. Since 1998, Argentina has been the only designated major non-NATO ally in Latin America, partly owing to Argentina's assistance to the United States in the Gulf War. Relations have been strained at times over the past few years, especially during the Cristina Fernández de Kirchner administration, but they have improved somewhat since President Mauricio Macri came to power in late 2015.

After Argentina became independent from Spanish rule, the United States formally recognized the United Provinces of the Río de la Plata, the legal predecessor to Argentina, on 27 January 1823. The bilateral relations have seesawed over the last century and a half between normal trade relations and serious tension over ideology and finance. There has never been a threat of war.[1] 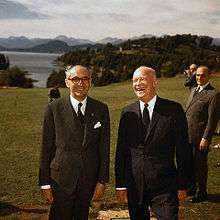 Argentina was integrated into the British international economy in the late 19th century; there was minimal trade with the United States. When the United States began promoting the Pan American Union, some Argentines were suspicious that it was indeed a device to lure the country into the US economic orbit, but most businessmen responded favorably and bilateral trade grew briskly. Relations soured when Argentina refused to join the Allies in the First World War. Argentina had a large German element and Germany had made large-scale investments. However, as a prosperous neutral it greatly expanded trade with the United States during the war and exported meat and wool to the Allies through Britain.[2]

Argentina hosted a fairly organized pro-Nazi element before the Second World War that was controlled by German ambassadors; Brazil, Chile, and Mexico had smaller movements as well.[3] US foreign-policy worked to unite all of Latin America in a coalition against Germany. Argentina proved recalcitrant, and the United States worked to undermine the Argentine government. Washington's policy backfired when the military seized power in a coup in 1943. Relations grew worse, prompting the powerful farm lobby in Washington to promote economic and diplomatic isolation of Argentina and to try unsuccessfully to keep it out of the United Nations in 1945. Historians now agree that the supposed affinity between Argentina and Germany was greatly exaggerated.[4]

The Argentine government remained neutral until the closing weeks of the war, albeit quietly tolerated entry of Nazi leaders and war criminals fleeing Europe as the conflict ended. Historians have shown there was little gold and probably not many Nazis, but the myths lived on and helped sour relations with the United States.[5][6]

By 1976, human rights groups in USA were denouncing the "Dirty War" waged against leftist dissidents by the repressive military regime in Argentina.[7][8] They demanded congressional control over foreign aid funding to regimes violating human rights. The US State Department saw Argentina as a bulwark of anti-Communism in South America. By the mid-1970s, at a time when détente with the USSR softened the anti-Communism issue and President Jimmy Carter highlighted issues of human rights, United States activists escalated their attacks and in 1978 secured a congressional cutoff of all US arms transfers to Argentina.[9] In 1982, Argentina seized the British colony of Falkland Islands in an attempt to quell domestic and economic unrest. The move was condemned by the US, who formally supported the British government in its quest to regain control over the islands. This lack of Pan Americanism in the mind of Argentines turned public opinion against the US and still is the base of resentment in the minds of older Argentineans today. 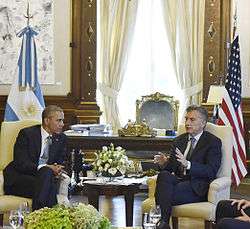 The United States has a positive bilateral relationship with Argentina based on many common strategic interests, including non-proliferation, counternarcotics, counterterrorism, the fight against human trafficking, and issues of regional stability, as well as the strength of commercial ties. Argentina signed a Letter of Agreement with the U.S. Department of State in 2004, opening the way for enhanced cooperation with the U.S. on counternarcotics issues and enabling the U.S. to begin providing financial assistance to the Government of Argentina for its counternarcotics efforts. In recognition of its contributions to international security and peacekeeping, the U.S. Government designated Argentina as a major non-NATO ally in January 1998.

The Office of the Secretary of Defense and the Argentine Ministry of Defense hold an annual Bilateral Working Group Meeting, alternating between Argentina and Washington, D.C. Furthermore, both nations exchange information through alternating annual Joint Staff Talks, military educational exchanges, and operational officer exchange billets.Argentina is a participant in the Three-Plus-One regional mechanism (Argentina, Brazil, Paraguay, and the U.S.), which focuses on coordination of counter-terrorism policies in the tri-border region. Argentina has endorsed the Proliferation Security Initiative, and has implemented the Container Security Initiative and the Trade Transparency Unit, both of which are programs administered by the U.S. Department of Homeland Security/Immigration and Customs Enforcement. The Container Security Initiative provides for the selective scanning of shipping containers to identify weapons of mass destruction components, and the Trade Transparency Unit works jointly with Argentine Customs to identify trade-based money laundering. The Financial Action Task Force on Money Laundering highlighted Argentine legislation passed during 2013 issuing new regulations strengthening suspicious transaction reporting requirements.[10] 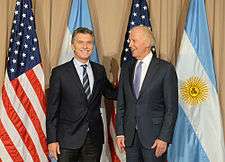 U.S.-Argentine cooperation also includes science and technology initiatives in the fields of space, peaceful uses of nuclear energy, and the environment. In June 2007, the U.S. and Argentina modernized a bilateral civil aviation agreement to update safety and security safeguards and allow a significant increase in flight frequencies between the two countries, which hold excellent potential for increased tourism and business travel. An active media, together with widespread interest in culture and society from the USA, make Argentina a receptive environment for the information and cultural exchange work of the U.S. Embassy. The Fulbright scholarship program has more than tripled the annual number of U.S. and Argentine academic grantees since 1994, and the U.S. Embassy is actively working to increase other education exchanges.

The United States is Argentina's fourth-largest export market (mainly energy staples, steel, and wine), and third-largest source of imports (mainly industrial supplies such as chemicals and machinery).[12] Argentina itself is a relatively minor trade partner for the United States, its imports from the U.S. of $9.9 billion making up 0.7% of total U.S. exports and its exports to the U.S. of $4.5 billion only 0.2% of U.S. imports; Argentina however is among the few nations with which the United States routinely maintains significant merchandise trade surpluses,[13] and the $5.4 billion surplus with Argentina in 2011 was the tenth-largest for the U.S. in the world.[14] The U.S. earned a further $4.1 billion surplus in trade in services with Argentina in 2011.[15] A record 690,000 Argentine nationals visited the United States in 2013, making Argentina the 15th largest source of foreign tourism into the U.S.[16]

Global opinion polls taken in 2006 and 2007 show that Argentine public opinion had become one of Anti-American as well as one of the most skeptical of U.S. foreign policy at the time.[17] Argentine public opinion of the U.S. and its policies improved during the Obama administration, in 2010 was divided about evenly (42% to 41%) between those who approve or disapprove of same. The Argentinian public opinion of the United States stayed at 41%, but has dropped slightly to 36% as of 2014. As of 2015, Argentinian views of the United States are evenly divided with 43% of Argentinians having a favorable view of the United States and 43% having an unfavorable view. .[18] According to the 2012 U.S. Global Leadership Report, only 19% of Argentines approve of U.S. foreign policy, the lowest rating for any surveyed country in the Americas.[19] 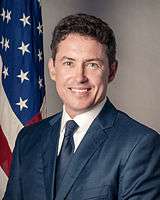 The U.S. Mission in Buenos Aires carries out the traditional diplomatic function of representing the U.S. Government and people in discussions with the Argentine Government, and more generally, in relations with the people of Argentina. The Embassy is focused on increasing people-to-people contacts, and promoting outreach and exchanges on a wide range of issues. Political, economic, and science officers deal directly with the Argentine Government in advancing U.S. interests but are also available to brief U.S. citizens on general conditions in the country. Officers from the U.S. Foreign Service, Foreign Commercial Service, and Foreign Agricultural Service work closely with the hundreds of U.S. companies that do business in Argentina, providing information on Argentine trade and industry regulations and assisting U.S. companies starting or maintaining business ventures in Argentina.

The embassy's Consular Section monitors the welfare and whereabouts of more than 20,000 U.S. citizen residents of Argentina and more than 250,000 U.S. tourists each year. Consular personnel also provide US citizens passport, voting, notary, Social Security, and other services. With the end of Argentine participation in the Visa Waiver Program in February 2002, Argentine tourists, students, and those who seek to work in the United States must have nonimmigrant visas. The Consular Section processes non-immigrant visa applications for persons who wish to visit the United States for tourism, studies, temporary work, or other purposes, and immigrant visas for persons who qualify to make the United States a permanent home.

Attaches accredited to Argentina from the U.S. Department of Justice (including the Drug Enforcement Administration and the Federal Bureau of Investigation), the Department of Homeland Security (including Immigration and Customs Enforcement, and Customs and Border Protection), the Federal Aviation Administration, and other federal agencies work closely with Argentine counterparts on international law enforcement cooperation, aviation security, and other issues of concern. The U.S. Department of Defense is represented by the U.S. Military Group and the Defense Attache Office. These organizations ensure close military-to-military contacts, and defense and security cooperation with the armed forces of Argentina.

Ambassador of Argentina to the United States