Nominations to the office of Secretary of HHS are referred to the Health, Education, Labor and Pensions Committee and the Finance Committee, which has jurisdiction over Medicare and Medicaid, before confirmation is considered by the full United States Senate.

Under the Patient Protection and Affordable Care Act the role of the Secretary has been greatly expanded.[1][2]

Sylvia Mathews Burwell was nominated by President Obama on April 11, 2014, to be the next Secretary of Health and Human Services after the resignation of Kathleen Sebelius.[3] She was confirmed on June 5, 2014 and sworn in on June 9, 2014.[4]

The duties of the secretary revolve around human conditions and concerns in the United States. This includes advising the president on matters of health, welfare, and income security programs. It strives to administer the Department of Health and Human Services to carry out approved programs and make the public aware of the objectives of the department.[5]

Since the attacks of 9/11 and the subsequent anthrax attacks, the position has held a unique significance in the War on Terrorism. Upon his departure, then-Secretary Tommy Thompson remarked "I, for the life of me, cannot understand why the terrorists have not attacked our food supply, because it is so easy to do..." Scholars concur, arguing that an attack on food (particularly milk) could affect more than 100,000 people.[6] In part, the new US DHHS, like other federal departments, have been subjected to a reorganization of federal personnel and contracts led by the US Homeland Security Office, and resulting in shifting privatization in core industries and "police control".

The Department of Health and Human Services oversees 11 agencies including the Food and Drug Administration (FDA), Center for Disease Control (CDC), National Institutes of Health (NIH), Administration for Children and Families (ACF) and Centers for Medicare & Medicaid Services (CMS).[7]

The line of succession for the Secretary of Health and Human Services is as follows:[9] 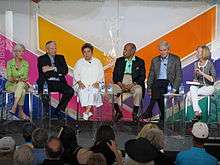 A gathering of five secretaries in June 2015