Lynch graduated from Harvard Law School in 1984. She then practiced law in New York and became a federal prosecutor in 1990, rising to become head of the Eastern District office. She later returned to private law practice, until she again became the top district prosecutor. From 2003 to 2005, she served on the board of the Federal Reserve Bank of New York.

On November 8, 2014, President Barack Obama nominated her to succeed Eric Holder as Attorney General.[1] On February 26, 2015, the Judiciary Committee of the United States Senate confirmed her appointment by a 12–8 vote, with all Democrats of the committee and three Republicans in favor. On April 23, 2015, Lynch was confirmed by the Senate by a 56–43 vote, making her the second African-American, the second woman, and the first African-American woman to be confirmed for the position. She was sworn in as Attorney General on April 27, 2015, by Vice President Joe Biden.

Lynch was born on May 21, 1959, in Greensboro, North Carolina. Her mother was a school librarian and her father a Baptist minister.[2][3][4] As a child, she spent hours with her father, watching court proceedings in the courthouse of Durham, North Carolina. Her early interest in court proceedings was compounded by stories of her grandfather, a sharecropper and pastor, who in the 1930s helped people move to the north to escape persecution under the racist Jim Crow laws of the time.[2][5] Lynch earned a Bachelor of Arts in English and American literature from Harvard College in 1981 and a Juris Doctor from Harvard Law School in 1984, where she was a member of the Harvard Legal Aid Bureau.[6][7] She is a member of Delta Sigma Theta Sorority, Inc., and was a charter member of the Xi Tau chapter of the sorority while at Harvard.[8][9]

Lynch's first legal job was as a litigation associate for Cahill Gordon & Reindel. She joined the Eastern District as a drug and violent-crime prosecutor in the U.S. Attorney's office in 1990. From 1994 to 1998, she served as the chief of the Long Island office and worked on several political corruption cases involving the government of Brookhaven, New York. From 1998 to 1999, she was the chief assistant U.S. Attorney in the Eastern District and headed the Brooklyn office.

In 1999, she was nominated by President Bill Clinton to serve as the U.S. Attorney for the Eastern District of New York.[10] During her term as U.S. Attorney, Lynch oversaw prosecution of New York City police officers in the Abner Louima case.

In 2001, Lynch left the U.S. Attorney's office to become a partner at Hogan & Hartson (later Hogan Lovells). She remained there until January 20, 2010, when President Barack Obama nominated Lynch to again serve as United States Attorney for the Eastern District of New York.[7][11] From 2003 to 2005, she was a member of the board of the Federal Reserve Bank of New York.[12]

Following the July 2014 death of Eric Garner, an unarmed man who died after being held in a department-prohibited chokehold by a New York City police officer, Lynch agreed to meet with Garner's family to discuss possible federal prosecution of the officer believed to be responsible for Garner's death.[13][14]

Lynch's office prosecuted Republican congressman Michael Grimm; prosecuted Democratic politicians Pedro Espada Jr. and William Boyland, Jr.; investigated Citigroup over mortgage securities sold by the bank, resulting in a US$7 billion settlement; and was involved in the US$1.2 billion settlement with HSBC over violations of the Bank Secrecy Act.[2][15][16]

Attorney General of the United States

On November 8, 2014, President Barack Obama nominated Lynch for the position of U.S. Attorney General, to succeed Eric Holder, who had previously announced his resignation, pending confirmation of his replacement. She was confirmed by the Senate Judiciary Committee on February 26, 2015, and approved by the Senate in a 56-43 vote on April 23,[21] thereby becoming the first African-American woman; the second African-American after Holder; and the second woman, after Janet Reno; to hold this office.[1][22]

Eight Republicans on the Senate Judiciary Committee, including the chairman, Chuck Grassley, had opposed Lynch's confirmation after what Democrats criticized as a record-long delay. Grassley defended delays in holding the vote, saying it was important to gather more information on Lynch’s role in settling a $1.9 billion money-laundering deal with HSBC when she served as United States Attorney in New York. Republican Senator David Vitter criticized recent admissions by Lynch that she had failed to find out about separate documents revealing HSBC's role in helping clients hide money offshore before agreeing not to prosecute the bank.[23] Rand Paul, though not on the committee, opposed her nomination for her support of civil forfeiture.[24] On April 23, 2015. cloture was invoked on her nomination by a vote of 66 to 34.[25] Her appointment was confirmed the same day by a 56 to 43 vote.[21][26] Her nomination process was one of the longest in the history of the United States, taking 166 days after she was first nominated for the post.[27] She was sworn in by Vice President Joe Biden on April 27, 2015.[28] 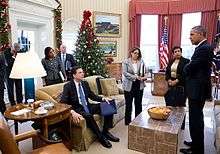 In July 2015, after the Charleston church shooting, Lynch announced the suspected shooter Dylann Roof would be charged with a hate crime.[29] On May 24, 2016, she further announced that the Justice Department would seek the death penalty for Roof.[30]

On December 7, 2015, Lynch stated the Justice Department would be investigating the Chicago Police Department to see if there was a potential violation of civil rights in the case of Laquan McDonald.[31]

On March 3, 2016, following the occupation of the Malheur National Wildlife Refuge, Lynch said charges would be filed soon against participants in the standoff while appearing in Portland, Oregon to commemorate the community's policing.[32]

After the death of Supreme Court Justice Antonin Scalia, Lynch's name was mentioned as being a potential nominee to replace him. On March 8, a Justice Department spokesperson said Lynch had asked the White House to withdraw her from consideration.[33]

In April 2016, Lynch took an active role in addressing what she called the difficulty of re-entry into society by felons, writing an op-ed[34] and making public appearances in support of raising awareness of this blight on their transition,[35] also calling on governors to make it easier for released felons to achieve state-issued identification.[36]

In June 2016, in response to the 2016 Orlando nightclub shooting, Lynch made multiple appearances on television news shows to highlight the ongoing investigation of the FBI,[37] disclosing that edited transcripts of the conversation between the shooter, Omar Mateen, and the FBI negotiators would be released.[38] On June 21, Lynch traveled to Orlando to both meet with survivors and inquire into the ongoing investigation, also bringing with her $1 million in emergency funding for Florida, Orange County, and Orlando to help pay for overtime and other investigative costs.[39]

On June 27, 2016, Lynch and former President Bill Clinton met privately aboard Lynch's Justice Department jet which was parked on the tarmac in Phoenix. ABC15 Phoenix reporter Christopher Sign broke the story on June 29, citing unnamed sources.[40] The following day, during a press conference in Phoenix, Arizona, Lynch denied the conversation was about the Hillary Clinton email controversy, or any matters pertaining to it; saying the conversation involved personal social topics such as travels, golf and grandchildren.[41] On July 1, 2016, Lynch swore she would "fully accept" the recommendation of the FBI and prosecutors regarding the email probe, and admitted that she understood how the meeting was raising "questions and concerns", and that she "certainly wouldn't do it again".[42] On July 6, a day after FBI Director James Comey recommended not pressing charges against Clinton, Lynch confirmed the Justice Department had opted to not pursue charges against Clinton and would close the probe into her private email server.[43] On July 12, Lynch testified before Republican lawmakers, noted for continuously refusing to elaborate on the legal basis of the Justice Department's choice to not prosecute Clinton.[44]

In October 2016, Lynch removed the Brooklyn FBI agents and federal prosecutors from the death of Eric Garner case, replacing them with agents from outside New York.[45] The local FBI agents and federal prosecutors had determined that charges should not be brought in the case, prompting strong disagreement from attorneys in the Washington, D.C. office of the Department’s Civil Rights Division.[45] Lynch’s intervention has been called “highly unusual”.[45]

In May 2016, Lynch delivered the commencement address at Howard University School of Law.

Lynch married Stephen Hargrove in 2007. In her personal life she uses her married name, Loretta Lynch Hargrove. Her husband has two children from a previous marriage.[2][46]