Venta Belgarum was a town in the Roman province of Britannia Superior, the civitas capital of the local tribe, the Belgae. The name Venta is Brittonic, meaning 'town' or 'meeting-place'.[1] Today it is known as Winchester and is situated in the English county of Hampshire. 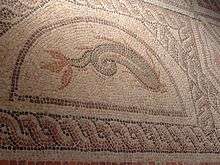 Although there is as yet no evidence for the presence of a pre-Roman oppidum like Verulamium or town like Calleva, there are several Iron Age hill forts in the near vicinity of the site: St Catherine's Hill, Oram's Arbour and Worthy Down. The settlement was apparently established around AD 70, partially on the site of Oram's Arbour,[2] which had been abandoned for some years. The River Itchen was diverted and a street grid laid out. A defensive bank and ditch was dug around the town in the 2nd century and a hundred years later a stone wall was added. The interior was the home to many fine Roman town houses or domus, as well as public buildings and Roman temples.

The forum-basilica appears to have included a temple to Jupiter, Juno and Minerva along with an accompanying Jupiter Column. Elsewhere, there was a Romano-British style temple dedicated to the Celtic horse goddess, Epona. There was a large Romano-British cemetery to the north of the town, at Lankhills, and another to the east. Excavations of the cemetery were carried out by British archaeologist Julian Richards in 1998, and again in 2013, as part of the BBC television Meet the Ancestors series.[3]

Red Roman bricks can be seen mixed with medieval material in this wall on St. George's Street

From the mid-4th century, new development at Venta halted. Houses fell into disrepair and the drainage system collapsed. The population concentrated itself in the higher and drier areas of the town. The defences were however strengthened and the cemeteries remained in use, notably with burials of males wearing so-called military-style mercenary belts. Ford identifies the community as the Cair Guinntguic[4] ("Fort Venta") listed by Nennius among the 28 cities of Britain in his History of the Britains.[5]

Following the Roman withdrawal from Britain in 410, urban life seems to have ceased around 450, although a small administrative centre might have continued after that on the site of the later Anglo-Saxon palace. Amid the Saxon invasions of Britain, cemeteries dating to the 6th and 7th centuries suggest a revival of settlement and Wintanceastre became the usual court for the kings of Wessex, and then for other Saxon, Danish, and Norman kings of England.[6]