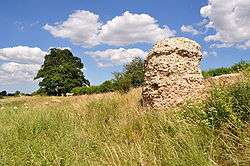 Remains of the defences

Venta Icenorum, meaning "Town of the Iceni", Venta is Brittonic, meaning 'town' or 'meeting-place'.,[1] located at modern-day Caistor St Edmund in the English county of Norfolk, was the civitas[2] or capital of the Iceni tribe, who inhabited the flatlands and marshes of that county and are famous for having revolted against Roman rule under their queen Boudica (or Boadicea) in the winter of 61 AD.

The town itself was probably laid out, and its first streets metalled, approximately in the first half of the second century.[3]

The town, which is mentioned in the Ravenna Cosmography,[4] and the Antonine Itinerary,[5] was a settlement near the village of Caistor St. Edmund, some 5 miles (8.0 km) south of present-day Norwich, and a mile or two from the Bronze Age henge at Arminghall. It lies on the River Tas. The embankments of Venta Icenorum can still be seen at Caistor today.

The ruins (British National Grid ref TG230034) are in the care of the Norfolk Archaeological Trust and managed by South Norfolk District Council.