Viroconium or Uriconium, formally Viroconium Cornoviorum, was a Roman town, one corner of which is now occupied by Wroxeter, a small village in Shropshire, England, about 5 miles (8.0 km) east-south-east of Shrewsbury. At its peak, Viroconium is estimated to have been the 4th-largest Roman settlement in Britain, a civitas with a population of more than 15 000.[1] The settlement probably lasted until the end of the 7th century or the beginning of the 8th.[2] Extensive remains can still be seen.

Viroconium is a Latinised form of a toponym that was reconstructed as Common Brittonic *Uiroconion "[city] of *Uirokū". *Uirokū (lit. "man-wolf") is believed to have been a masculine given name meaning "werewolf".[3][4]

The term "Cornoviorum" distinguishes the site as the Viroconium "of the Cornovii", the Celtic tribe whose civitas the settlement became. The original site of the Cornovian capital (also thought to have been named *Uiroconion) was a hillfort on the Wrekin.

Viroconium was established in about AD 58 as a castra for the Legio XIV Gemina during their invasion of Roman Wales. They were later replaced by the Legio XX Valeria Victrix until the fortress was abandoned by the military around AD 88 and taken over by the civilian settlement that had grown up around the fort. By 130, it had expanded to cover an area of more than 173 acres (70 ha). It then had many public buildings, including thermae and a colonnaded forum dedicated to Hadrian as shown by the remains of an inscription. Simpler temples and shops have also been excavated. At its peak, Viroconium is estimated to have been the fourth largest Roman settlement in Britain with a population of more than 15,000.[1]

Following the end of Roman rule in Britain around 410, the Cornovii seem to have divided into Pengwern and Powys. The later minor Magonsæte sub-kingdom of the Angles emerged in the area when Oswiu conquered Pengwern in 656.

Viroconium may have served as the early sub-Roman capital of Powys. The city has been variously identified with the Cair Urnarc[5] and Cair Guricon[6] which appeared in the Historia Brittonum's list the 28 civitates of Britain.[7]

Town life in Viroconium continued in the fifth century, but many of the buildings fell into disrepair. Between 530 and 570, when most Roman urban sites and villas in Britain were being abandoned,[8] there was a substantial rebuilding programme. The old basilica was carefully demolished and replaced with new timber-framed buildings on rubble platforms. These probably included a very large two-storey building and a number of storage buildings and houses. In all, 33 new buildings were "carefully planned and executed" and "skillfully constructed to Roman measurements using a trained labour force".[9] Who instigated this rebuilding programme is not known, but it may have been a bishop.[10] Some of the buildings were renewed three times, and the community probably lasted about 75 years until, for some reason, many of the buildings were dismantled.[11]

The site was probably abandoned peacefully in the second half of the seventh century or the beginning of the eighth.[12] The court of Powys is believed to have moved to Mathrafal sometime before 717 following famine and plague in its original location.

According to archaeologist Philip A. Barker, the parish churches of Atcham, Wroxeter, and Upton Magna are largely built of stone taken from the buildings of Viroconium Cornoviorum.[13] 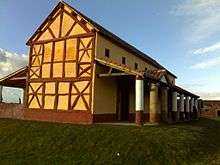 The recreation of a Roman town house at Viroconium

Some remains are still standing, and further buildings have been excavated. These include "the Old Work" (an archway, part of the baths' frigidarium and the largest free-standing Roman ruin in England) and the remains of a baths complex. These are on display to the public and, along with a small museum, are looked after by English Heritage under the name "Wroxeter Roman City". Some of the more important finds are housed in Rowley's House Museum in Shrewsbury. Most of the town still remains buried, but it has largely been mapped through geophysical survey and aerial archaeology. A reconstructed Roman villa was opened to the public on 19 February 2011[14] to give visitors an insight into Roman building techniques and how the Romans lived.[15] A Channel 4 television series, Rome Wasn't Built in a Day,[16] showed how it was built using authentic ancient techniques. The builders were assisted by a team of local volunteers and supervised by archaeologist Dai Morgan Evans, who designed the villa.