Wroxeter /ˈrɒksᵻtər/ is a village in Shropshire, England. It forms part of the civil parish of Wroxeter and Uppington and is located besides the River Severn, about 5 miles (8.0 km) south-east of Shrewsbury. It is at the site of the Roman city of Viroconium Cornoviorum, which was the fourth largest civitas capital in Roman Britain.

Wroxeter is on the site of the Roman city of Viroconium Cornoviorum, which was the 4th-largest tribal capital (civitas) in Roman Britain. The name—"Viroconium of the Cornovians"—preserves a native Brittonic name that has been reconstructed as *Uiroconion ("[the city] of *Uirokū"), where *Uiro-ku (lit. "man"-"wolf") is believed to have been a masculine given name meaning "werewolf".[1][2] The original site of the Cornovian capital (also thought to have been named *Uiroconion) was a hillfort on the Wrekin. 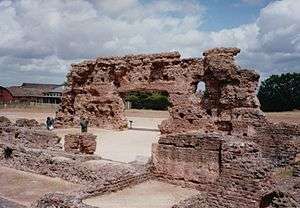 The ruins of Viroconium's public baths at Wroxeter

The relocated Viroconium was established about AD 58 as a fortified camp (castra) for the Legio XIV Gemina during their invasion of Wales. The main section of the Watling Street Roman road runs across England between Dubris (Roman Dover) and Wroxeter. The 14th Legion was later replaced by the Legio XX Valeria Victrix, which was subsequently relocated to Chester. Around the year 88, the military abandoned the fortress and it was taken over by the Cornovians' civilian settlement. It prospered over the next century, with many public buildings, including thermae and a colonnaded forum. At its peak, it is thought to have been the 4th-largest settlement in Roman Britain, with a population of more than 15 000.[3] The Roman city was rediscovered in 1859 when workmen began excavating the baths complex.[4][5] A replica Roman villa was constructed in 2010 for a Channel 4 television programme called Rome Wasn't Built in a Day and was opened to the public on 19 February 2011.[9]

Following the Roman withdrawal from Britain around 410, the Cornovians seem to have divided into Pengwern and Powys. The minor Magonsæte sub-kingdom also emerged in the area in the interlude between Powysian and Mercian rule. Viroconium may have served as the early post-Roman capital of Powys prior to its removal to Mathrafal sometime before 717, following famine and plague in the area. The city has been variously identified with the Cair Urnarc[10] and Cair Guricon[11] which appeared in the 9th-century History of the Britons’s list of the 28 cities of Britain.[12]

At the centre of Wroxeter village is Saint Andrew's parish church, some of which is built from re-used Roman masonry. The oldest visible section of the church is the Anglo-Saxon part of the north wall which is built of Roman monumental stone blocks. The chancel and the lower part of the tower are Norman.[13] The gatepiers to the churchyard are a pair of Roman columns and the font in the church was made by hollowing out the capital of a Roman column.[14] Later additions to the church incorporate remains of an Anglo-Saxon preaching cross and carvings salvaged from nearby Haughmond Abbey following the Dissolution of the Monasteries.

The west window, bearing figures of St Andrew and St George, designed by the workshops of William Morris & Co, is a parish war memorial, as is a brass plaque listing parish men who died serving in World War I, one of whom, Captain C.W. Wolseley-Jenkins, has an individual memorial plaque in the east end.[15]

St. Andrew's was declared redundant in 1980 and is now managed by The Churches Conservation Trust. St. Andrew's parish is now united with that of St. Mary, Eaton Constantine.[16]

A.E. Housman visited the site and was impressed enough to write of "when Uricon the city stood", the poem ending "Today the Roman and his trouble Are ashes under Uricon."[17]

Bernard Cornwell has the main character of The Saxon Stories visit Wroxeter in Death of Kings, referring to it as an ancient Roman city that was "as big as London" and using it as an illustration of his pagan beliefs that the World will end in chaos.[18]