Vim (/vɪm/;[3] a contraction of Vi IMproved) is a clone of Bill Joy's vi text editor program for Unix. It was written by Bram Moolenaar based on source for a port of the Stevie editor to the Amiga[4] and first released publicly in 1991. Vim is designed for use both from a command-line interface and as a standalone application in a graphical user interface. Vim is free and open source software and is released under a license that includes some charityware clauses, encouraging users who enjoy the software to consider donating to children in Uganda.[5] The license is compatible with the GNU General Public License.

The name "Vim" is an acronym for "Vi IMproved"[12] because Vim is an extended version of the vi editor, with many additional features designed to be helpful in editing program source code. Originally, the acronym stood for "Vi IMitation", but that was changed with the release of Vim 2.0 in December 1993.[13] A later comment states that the reason for changing the name was that Vim's feature set surpassed that of vi.[14] 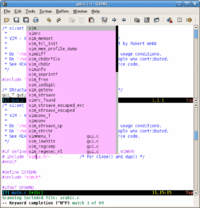 Like vi, Vim's interface is not based on menus or icons but on commands given in a text user interface; its GUI mode, gVim, adds menus and toolbars for commonly used commands but the full functionality is still expressed through its command line mode. Vi (and by extension Vim) tends to allow a typist to keep their fingers on the home row, which can be an advantage for a touch typist.[26]

Vim has a built-in tutorial for beginners (accessible through the "vimtutor" command). There is also the Vim Users' Manual that details Vim's features. This manual can be read from within Vim, or found online.[27][28]

Vim also has a built-in help facility (using the :help command) that allows users to query and navigate through commands and features.

Part of Vim's power is that it can be extensively customized. The basic interface can be controlled by the many options available, and the user can define personalized key mappings—often called macros—or abbreviations to automate sequences of keystrokes, or even call internal or user-defined functions.

There are projects bundling together complex scripts and customizations and aimed at turning Vim into a tool for a specific task or adding a major flavour to its behaviour. Examples include Cream, which makes Vim behave like a click-and-type editor, or VimOutliner, which provides a comfortable outliner for users of Unix-like systems.

Features and improvements over vi

Vim has a vi compatibility mode, but, when not in this mode, Vim has many enhancements over vi.[31] However, even in compatibility mode, Vim is not entirely compatible with vi as defined in the Single Unix Specification[32] and POSIX (e.g., Vim does not support vi's open mode, only visual mode). Vim has nevertheless been described as "very much compatible with Vi".[33]

Some of Vim's enhancements include completion, comparison and merging of files (known as vimdiff), a comprehensive integrated help system, extended regular expressions, scripting languages (both native and through alternative scripting interpreters such as Perl, Python, Ruby, Tcl, etc.) including support for plugins, a graphical user interface (known as gvim), limited integrated development environment-like features, mouse interaction (both with and without the GUI), folding, editing of compressed or archived files in gzip, bzip2, zip, and tar format and files over network protocols such as SSH, FTP, and HTTP, session state preservation, spell checking, split (horizontal and vertical) and tabbed windows, Unicode and other multi-language support, syntax highlighting, trans-session command, search and cursor position histories, multiple level and branching undo/redo history which can persist across editing sessions, and visual mode.

Vim script (also called vimscript or VimL) is the scripting language built into Vim.[34] Based on the ex editor language of the original vi editor, early versions of Vim added commands for control flow and function definitions. Since version 7, Vim script also supports more advanced data types such as lists and dictionaries and (a simple form of) object-oriented programming. Built-in functions such as map() and filter() allow a basic form of functional programming, and Vim script has lambda since version 8.0. Vim script is mostly written in an imperative programming style.

Vim macros can contain a sequence of normal-mode commands, but can also invoke ex commands or functions written in Vim script for more complex tasks. Almost all extensions (called plugins or more commonly scripts) of the core Vim functionality are written in Vim script, but plugins can also utilize other interpreted languages like Perl, Python, Lua, or Ruby (if support for them is compiled into the Vim binary).

Vim script files are stored in plain text format and the file name extension is .vim. There are libraries for Vim script available on http://www.vim.org/ as Vim plugins.

Independent ports of Vim are available both for Android[37] and iOS.[38]

Neovim[39] is a refactor of Vim, that strives to be a superset of Vim.[40] Neovim shares the same configuration syntax with Vim; as a result, the same config file can be used with both editors.[41] As of version 0.1, released in December 2015, Neovim is compatible with almost all of Vim's features.[42]

The Neovim project was started in 2014, with some Vim community members offering early support of the high-level refactoring effort to provide better scripting, plugins, and integration with modern GUIs.[43][44] Neovim had a successful fundraiser on March 23, 2014,[45] supporting at least one full-time developer. Several frontends are under development, making use of Neovim's capabilities.[46][47]

The Neovim editor is available in Ubuntu's PPAs,[48] and several other package managers,[49] making it possible to install on a variety of Linux-based operating systems.