In computing, a plug-in (or plugin, add-in, addin, add-on, addon, or extension) is a software component that adds a specific feature to an existing computer program. When a program supports plug-ins, it enables customization. The common examples are the plug-ins used in web browsers to add new features such as search-engines, virus scanners, or the ability to use a new file type such as a new video format. Well-known browser plug-ins include the Adobe Flash Player, the QuickTime Player, and the Java plug-in, which can launch a user-activated Java applet on a web page to its execution on a local Java virtual machine.

A theme or skin is a preset package containing additional or changed graphical appearance details, achieved by the use of a graphical user interface (GUI) that can be applied to specific software and websites to suit the purpose, topic, or tastes of different users to customize the look and feel of a piece of computer software or an operating system front-end GUI (and window managers).

Applications support plug-ins for many reasons. Some of the main reasons include:

Types of applications and why they use plug-ins: 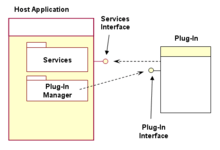 Programmers typically implement plug-in functionality using shared libraries installed in a place prescribed by the host application. HyperCard supported a similar facility, but more commonly included the plug-in code in the HyperCard documents (called stacks) themselves. Thus the HyperCard stack became a self-contained application in its own right, distributable as a single entity that end-users could run without the need for additional installation-steps. Programs may also implement plugins by loading a directory of simple script files written in a scripting language like Python or Lua.

In Mozilla Foundation definitions, the words "add-on", "extension" and "plug-in" are not synonyms. "Add-on" can refer to anything that extends the functions of a Mozilla application. Extensions comprise a subtype, albeit the most common and the most powerful one. Mozilla applications come with integrated add-on managers that, similar to package managers, install, update and manage extensions. The term, "Plug-in", however, strictly refers to NPAPI-based web content renderers. Plug-ins are being deprecated.[3]

Plug-ins appeared as early as the mid 1970s, when the EDT text editor running on the Unisys VS/9 operating system using the UNIVAC Series 90 mainframe computers provided the ability to run a program from the editor and to allow such a program to access the editor buffer, thus allowing an external program to access an edit session in memory.[4] The plug-in program could make calls to the editor to have it perform text-editing services upon the buffer that the editor shared with the plug-in. The Waterloo Fortran compiler used this feature to allow interactive compilation of Fortran programs edited by EDT.