The Volkswagen Vento is a subcompact car produced by Volkswagen India, the subsidiary of the German manufacturer Volkswagen, since 2010. It is essentially a three-box Volkswagen Polo with a stretched wheelbase and has been developed especially for some markets. The car is sold under the Vento name in India, Malaysia and Mexico. In Thailand, Indonesia, South Africa, Argentina, Russia, Jordan, Tunisia and the UAE it is sold as the Volkswagen Polo Sedan. The word Vento means 'wind' in both Italian and Portuguese. It is also known as the Volkswagen Polo Notch in the Philippines.

Technically, the car is based on a stretched version of the Volkswagen Polo. The extra wheelbase offers more rear legroom than the hatchback, 50mm additional wheelbase and 500-liters of boot space, something that is hugely appreciated by the customers. VW offers a choice of three engine options inside India and Mexico; a 1.6 litre petrol engine mated to a five-speed manual and a 1.5 litre high torque diesel engine mated to a five-speed manual gearbox or a seven-speed automatic gearbox in the Indian market. There is also the 1.2TSI option available only paired with a seven-speed automatic gearbox. 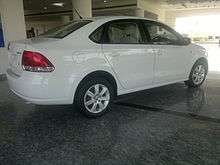 The car in India is available in three trim levels: the Trendline, Comfortline and Highline, with the Petrol Highline also having the automatic option. Among the three variants, the Trendline is a bare-basic trim level, forming an entry point for the vehicle. The Comfortline gets a CD-MP3 music system, body-coloured door mirrors and handles and fog lamps among other features. The Highline features an Integrated USB music system, steering-mounted audio controls, leather upholstery, ABS, front airbags, a multi-function display, 15" alloy wheels and other standard features.[3]

VW recently introduced a new special edition version "Breeze" on the Trendline, featuring new, nifty features and added accessories.[4] Besides the "Breeze', Volkswagen India, in collaboration with the IPL authorities, annually offers a special IPL edition at a slight premium.

In March 2011, Volkswagen recorded an impressive sales figure of 3973 units, dethroning the Honda City for the first time since its launch.[5] Overall the car has been quite successful in the Indian market and has been particularly lauded for its build quality.[6]

In November 2011, Škoda, a subsidiary of Volkswagen, introduced the Rapid, a car that is basically a re-badged Vento.

In April 2012, the car is sold in Malaysia under the name "Polo Sedan". The car is also manufactured and sold in Russia and Thailand as "Volkswagen Polo Sedan" with only the petrol engine available.

As of late 2013, the Vento manufactured in India is being offered in the Mexican market, both with gasoline and diesel engines. Gasoline-powered cars have the choice of manual or automatic transmissions; diesel is sold as a manual only. Trim levels are called Style, Active and Highline.

Again, in late 2013, when Volkswagen returned to the Philippines, it launched the Vento as the Polo Notch in its lineup.

Since 2014, Polo introduced in Taiwan market will switch from European models(hatch back only) to India models,Both hatch back and sedan(rebadged as Polo Sedan) introduced, all with 1.6MPI petrol engine and 6 speed tiptronic powertrain, price also lowered for 2014 models, looking forward to compete with locally made economy cars.

The Vento is available with a choice of petrol (manual or automatic transmission) and diesel. 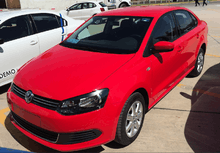 The Volkswagen Vento was introduced in the Mexican Market like a 2014 model Manufactured by Volkswagen India.

The top of the line, for now, is limited to the Highline version, with respect to Active, added automatic climate (climatronic), electric mirrors, electric windows with automatic up/down and full driver side control, chrome inserts on the dashboard, gear shift lever, steering wheel and speed brake handles and lined in leather, finally with fog lights.

Use of the name

Volkswagen Vento was the commercial name of the third-generation Volkswagen Jetta (1992–1999) in Europe.