The Volkswagen Scirocco is a sport compact coupe produced by the German manufacturer Volkswagen, undergoing two generations of development between 1974 and 1992 and reintroduced in a third generation in August 2008.

The Scirocco shares its name with the Mediterranean wind Sirocco. Volkswagen makes numerous references in marketing literature to this. As an example, their 1975 print advertisement states: "Scirocco. A hot new car from Volkswagen. As fast and powerful as the desert wind it's named after." A Volkswagen brochure for the second generation Scirocco states: "Named after a fierce desert wind, the Scirocco's front wheel drive and transverse engine contribute to its tracking ability at all speeds." [1]

Volkswagen began work on the car during the early 1970s as the replacement for the aging Karmann Ghia coupe, and designated it the Typ 53 internally. Although the platform of the Golf (Rabbit) was used to underpin the new Scirocco, almost every part of the car was re-engineered in favour of a sportier new styling (penned by Giorgetto Giugiaro) which was sleeker and sportier than that of the Golf.

The design of the vehicle combined with the lack of US D.O.T. approved rectangular headlights, made it necessary to have four round headlights, two for low beam use and two for high beam use for all the cars imported to USA. However, the European "TS" version, for which 85 PS of maximum power was listed, was easily distinguishable from the less powerful "L" and "S" (50 and 70 PS) versions which came with just two rectangular headlights.[5] An automatic transmission option was added in January 1975.[5]

Rear view of a pre-facelift model 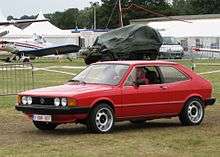 Scirocco I side view: wrap-around front indicators and the plastic-coated one-piece wrap-around bumpers mark this out as a post 1978 car

The Scirocco was sold in Japan at Yanase dealerships that specialize in North American and European vehicles with right hand drive starting in 1976, initially offering the TS trim package with the 1.4L engine and a 4-speed manual transmission. In 1977, the GTE and LS were offered with the 1.5L engine and the fuel injection technology from Bosch. The GTE was available with either the 4-speed manual transmission or the 3-speed automatic, while the LS offered the automatic only. Sales of the Scirocco continued for this entire generation to Japanese buyers, and it was in compliance with Japanese Government dimension regulations which helped sales. The engines offered to Japanese buyers were the smaller displacement versions to reduce the annual Japanese road tax obligation.

The car changed little before being replaced by the Type 2 version in March 1981 (Europe).[6] However, air conditioning became available as an option on the domestic market in August 1975.[7] The possibility to retrofit the installation, together with a larger battery, was offered to existing owners.[7]

During the production of the "Type 53", there were subtle changes to the body and trim. On cars produced after the summer break in August 1975 (for the 1976 model year), the conventional two wiper system changed to a single wiper which parks on the passenger side of the windscreen, while the driver also benefited from improved, lighter, steering linkage.[5] In August 1977 (for model year 1978) the separate front side marker and turn signal, changed to a combination wrap-around orange lens. At the same time, behind the doors the B-pillar colour changed from body colour to black, which was thought to give the car a more pleasing profile.[8] Other mid-life changes include the move from chrome bumpers with rubberised end caps to a plastic-coated one-piece wrap around bumper.[8] In 1979, the one-piece "flag" style outside mirrors transitioned to a two-piece shrouded mirror. There were also special variants throughout the Type 1 production. Most distinguishable by paint schemes and trim, there were special versions called "Sidewinder", "Sidewinder II", "Champagne Edition", "Champagne Edition II" and the "S". The Champagne Edition II only came in white with black accents and a Zender front spoiler. On the NA models the 1980 "S" versions came in only three colours, Alpine White, Black and Mars Red with unique colour accents. This "S" model differed from the base model by having blacked out chrome trim, day glow additions to the exterior trim, Recaro designed sports seats, white letter tires, sport strips and a standard 5 speed transmission. This was followed by the 1981 "S" versions which only came in Cosmos Silver Metallic, Cirrus Gray Metallic and Mars Red without the colour accents. Steel sunroofs were an available option on both the "S" non-"S" vehicles. Unlike the sunroofs on the 2nd generation Sciroccos introduced in 1982, these earlier versions only tilted open. They did not slide back but could be removed and stored in a special fabric folder and placed in the trunk hatch. Not forgetting the addition of the "Storm" models, available in two colours with a run of 250 cars in each colour

A heavily redesigned "Type 2" variant (internally designated Typ 53B) went on sale in 1981, although it remained on the A1 platform. The second generation Scirocco, still assembled on behalf of Volkswagen by Karmann of Osnabrück (in the same factory as the first generation Scirocco), was first shown at the 1981 Geneva Salon in March that year.[9] Designed by Volkswagen's own internal design team, the new car featured increased front and rear headroom, increased luggage space and a reduction in the coefficient of drag. One unique feature of the Type 2 was the location of the rear spoiler midway up the glass on the rear hatch. A mid-cycle update occurred in 1984, which included minor changes over the 1982 model: removal of the outlined "SCIROCCO" script from the rear hatch (below the spoiler), a redesigned air conditioning compressor, and a different brake master cylinder with in-line proportioning valves and a brake light switch mounted to the pedal instead of on the master cylinder.

Halfway through the 1984 model year, a new space-saver spare wheel was added, that provided room for a larger fuel tank (with a second "transfer" fuel pump). Leather interior, power windows and mirrors, air conditioning, and a manual sunroof were options for all years. The 1984 model year saw the return of two windshield wipers (vs the large single wiper), absent since the 1976 models. Eleven different engines were offered in the Type 2 Scirocco over the production run, although not all engines were available in all markets. These engines included both carburetor and fuel injection engines. Initially all models had eight-valve engines. A 16-valve head was developed by tuner Oettinger in 1981, with the modification adopted by Volkswagen when they showed a multi-valve Scirocco at the 1983 Frankfurt Motor Show.[10] It went on sale in Germany and a few other markets in July 1985, with a catalyzed model arriving in 1986. Displacements ranged from 1.3 liters up to 1.8 liters. Power ranged from 44 kW (60 PS) to 82 kW (112 PS) for the 8 valve engines and either 95 kW (129 PS) or 102 kW (139 PS) for the 16 valve engines.[11]

Scirocco sales continued until 1992 in Germany, the UK, and some other European markets. The Scirocco was briefly joined but effectively replaced by the Corrado in the VW line-up, although this had been on sale since 1988 and was aimed further upmarket.

Specifications in North America are somewhat different from those of cars sold in the rest of the world, due to the differing safety and emissions regulations in place there. In North America, 1982 and 1983 models produce 74 hp (55 kW) and 90 ft·lbf (120 N·m) of torque. The engine code was EN. The 1984 models produce 90 hp (67 kW) and 100 ft·lbf (140 N·m) torque, the engine code was JH. In mid-1986, a 16-valve model was released in the United States and Canada, which included a full body skirt, larger rear spoiler, and tear-drop shaped wheel slots to distinguish it from Type 2 8-valve models. Sales continued until 1988 in the United States, 1989 in Canada, being effectively replaced in these markets by the more expensive Corrado.

Volkswagen officially announced in June 2006 production of a new Scirocco model at the AutoEuropa assembly plant in Palmela, Portugal.[12]

The new model, identified by the internal type numbers 137 or 1K8, is based on the PQ35 platform of the Golf V and was unveiled at the 2008 Geneva Motor Show. It went on sale in summer 2008 in Europe, with sales in other countries beginning early 2009. The Type 3 Scirocco won "Car of the Year 2008" from Top Gear Magazine.

The 2008 model of the Scirocco received a five star safety rating from EuroNCAP even after the driver test dummy's head hit the steering wheel when the airbag bottomed out. The model tested was a left-hand-drive three-door hatchback and scored in four areas:

Six years after its launch in 2008, Volkswagen revealed the 2014 Scirocco face-lift at the Geneva Motor Show. The car received alterations to keep the model fresh for approximately three years. On the outside the changes aren't very obvious as Volkswagen installed only a slightly re-profiled bumper, new bi-xenon headlights with LED daytime running lights and they also tweaked the grille. At the back there are restyled LED taillights, along with a reworked bumper and boot lid. These changes carry over onto the range-topping Scirocco R as well.[16]

Volkswagen is set to unveil the Scirocco GTS at the 2015 Shanghai Motor Show.[17]

In the 24 Hours Nürburgring in May 2008, three new Volkswagen Scirocco[18] did very well in the field of over 200, among them many high powered cars, finishing 11th and 15th, with veteran Hans Joachim Stuck driving both cars (and Carlos Sainz the slower one). The direct competitors, two Opel Astra H GTC driven by drivers selected from 18,000 hopefuls in a year-long TV covered process, were beaten decisively. In the Scandinavian Touring Car Championship, Fredrik Ekblom drives a Scirocco for the Biogas team. The car is run on biogas and not petrol.

Absence of a North American version

In April 2007, Volkswagen America vice president Adrian Hallmark claimed that Volkswagen preferred not to bring the Scirocco to North America since it could negatively affect GTI sales.[19] It was later stated that the final decision would be made in 2008 by Martin Winterkorn (Volkswagen's CEO), not Volkswagen of America.[20]

In early March 2008, MotorAuthority reported that, due to the increasing gap between the United States dollar and the Euro, the Scirocco would not be made available for American consumers. "This car would fit the U.S. market but at the current exchange rate we wouldn't make any money," Volkswagen sales and marketing chief Detlef Wittig told Bloomberg reporters.

The Studie R is a concept car based on the Scirocco GT24, after Volkswagen had cancelled the production of the Scirocco R32.[24] It has a 2.0 L TSI engine rated at 270 PS (199 kW; 266 hp), six-speed dual clutch transmission, four-piston brake calipers and a sound-optimized exhaust system with oval, polished tailpipes.

The Studie R was unveiled at the Bologna Motor Show.[25][26]