listen ) (literally, "Tub" car,[1] previously mostly used for rail, industrial or agricultural hopper cars) was a light military vehicle designed by Ferdinand Porsche and built by Volkswagen during World War II for use by the German military (both Wehrmacht and Waffen-SS). Based heavily on the Volkswagen Beetle, it was prototyped as the Type 62, but eventually became known internally as the Type 82.

Kübelwagen is an abbreviation of Kübelsitzwagen, meaning "bucket-seat car" because all German light military vehicles that had no doors were fitted with bucket seats to prevent passengers from falling out.[2] The first VW test vehicles had no doors and were therefore fitted with bucket seats, so acquiring the name VW Kübelsitzwagen that was later shortened to Kübelwagen. Mercedes, Opel and Tatra also built Kübel(sitz)wagens.[2]

With its rolling chassis and mechanics built at Stadt des KdF-Wagens (renamed Wolfsburg after 1945), and its body built by US-owned firm Ambi Budd Presswerke in Berlin,[3] the Kübelwagen was for the Germans what the Jeep and GAZ-67 were for the Allies.

The Kübelwagen on the Eastern Front in 1943. 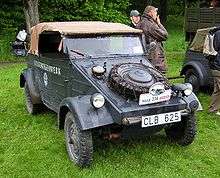 Although Adolf Hitler discussed with Ferdinand Porsche the possibility of military application of the Volkswagen as early as April 1934, it was not until January 1938 that high-ranking Third Reich army officials formally approached Porsche about designing an inexpensive, light-weight military transport vehicle, that could be operated reliably both on- and off-road, in even the most extreme conditions. This implied that the Beetle could provide the basis for such a vehicle.

Porsche began work on the project immediately, having a prototype of the vehicle ready within the month, but realized during development that it would not be enough to reinforce the Beetle's chassis to handle the stresses that military use would place on it. In order to guarantee adequate off-road performance of a two-wheel-drive vehicle with a 1,000 cc FMCV 1 engine, it would have to be lightweight. In fact, the army had stipulated a laden weight of 950 kg (2,090 lb), including four battle-dressed troops, which meant that the vehicle itself should not weigh more than 550 kg (1,210 lb). Porsche therefore sub-contracted Trutz, an experienced military coachbuilder, to help out with the body design.

Developmental testing by the military began after a presentation of the prototypes designated as Type 62 in November 1938. Despite lacking four wheel drive, a mainstay of the American military Jeeps, the vehicle proved very competent at maneuvering its way over rough terrain, even in a direct comparison with a contemporary standard German army 4×4, and the project was given the green light for further development. The vehicle's light weight and ZF self-locking differential compensated for the lack of 4×4 capabilities.

Further development of the Type 62 took place during 1939, including a more angular body design, and pre-production models were field-tested in the invasion of Poland, that started in September that year. Despite their overall satisfaction with the vehicle's performance, military commanders demanded that a few important changes be made: the lowest speed of the vehicle had to be reduced from 8 km/h (5.0 mph) to 4 km/h (2.5 mph) as an adjustment to the pace of marching soldiers. Second, it needed some improvement of its off-road ability. Porsche responded to both requests by mounting new axles with gear-reduction hubs, providing the car with more torque and more ground-clearance all at once. Revised dampers, 41 cm (16 in) wheels, and a limited slip differential, as well as countless small modifications, completed the specification. In order to reflect the changes, the vehicle was renamed Type 82.

Full-scale production of the Type 82 Kübelwagen started in February 1940, as soon as the VW factories had become operational. No major changes took place before production ended in 1945, only small modifications were implemented, mostly eliminating unnecessary parts and reinforcing some, which had proved unequal to the task. Prototype versions were assembled with four-wheel-drive (Type 86) and different engines, but none offered a significant increase in performance or capability over the existing Type 82 and the designs were never implemented. As of March 1943, the car received a revised dash and the bigger 1,131 cc engine, developed for the Schwimmwagen, that produced more torque and power than the original 985 cc unit. When Volkswagen production ceased at the end of the war, 50,435 Kübelwagen vehicles had been produced,[4] and the vehicle had proven itself to be surprisingly useful, reliable, and durable.

Long after the end of the war, VW resurrected the basic Kübelwagen design as the 1969 Type 181, developed for the German Federal Armed Forces and later also produced for the civilian market, known as "Thing" in the US, "Trekker" in the UK, and "Safari" in Mexico. Although similar in looks and design, almost no parts were interchangeable with the Type 82.

When the German military took delivery of the first vehicles, they immediately put them to the test on- and off-road in snow and ice to test their capability at handling European winters. Several four-wheel-drive vehicles were used as reference points. The two-wheel-drive Kübelwagen surprised even those who had been a part of its development, as it handily out-performed the other vehicles in nearly every test. Most notably, thanks to its smooth, flat underbody, the Kübel would propel itself much like a motorised sled, when its wheels were sinking into sand, snow, or mud, allowing it to follow tracked vehicles with remarkable tenacity.

In November 1943, the U.S. military conducted a series of tests as well on several Type 82s they had captured in North Africa. In U.S. War Department Technical Manual TM-E 30-451, Handbook on German Military Forces, dated 15 March 1945 (p. 416), it states "The Volkswagen, the German equivalent of the American 'Jeep', is inferior in every way, except in the comfort of its seating accommodations."

At the same time, another Kübelwagen, also captured in North Africa, had been dissected in Britain by engineers of the Humber Car Company, whose report was equally unfavourable and dismissive.[5]

Among the design features that contributed to the Kübelwagen's performance were:

Apart from that, the air-cooled engine proved highly tolerant of hot and cold climates, and less vulnerable to bullets, due to the absence of a radiator. For starting under winter conditions, a specially volatile starting fuel was required, contained in a small auxiliary fuel tank.

As the body was not a load-bearing part of the structure of the vehicle, it could easily be modified to special purposes. 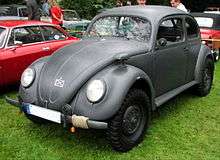 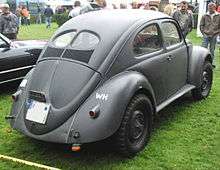 The following body types and variants of the Type 82 were produced:

Intermeccanica Kubelwagen
This article is issued from Wikipedia - version of the 11/25/2016. The text is available under the Creative Commons Attribution/Share Alike but additional terms may apply for the media files.