The Volkswagen CC (originally known as the Volkswagen Passat CC in its first generation[3]) is a four-door sedan version of the Volkswagen Passat with a "stylized sweeping roofline". [4] reducing rear headroom and cargo space.[5] It debuted in January 2008 at the North American International Auto Show in Detroit. According to Volkswagen, the suffix CC stands for Comfort Coupé despite it not being a coupé due to having four doors.

With the revised version, Volkswagen promotes the CC as having "sports car" dynamics, but road tests indicate that "calling the CC a sport sedan is completely misleading."[8] Compared to other midsize sedans in the marketplace, the 2013 Volkswagen CC was evaluated by Edmunds as "attractive and higher-quality alternative ... though its smallish backseat and trunk may be deal-breakers ... [and] the sport-tuned suspension is on the firm side."[9] Automotive journalists describe the CC sedan's ride as "nearly sports car firm, with every bump and undulation sent directly to your backside."[10] 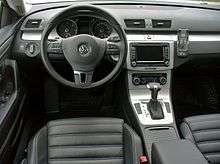 On the European market the CC is offered with 4MOTION four-wheel drive on the 2.0-litre TDI engines. The 103 kW (140 PS) model comes with manual transmission and the 125 kW (170 PS) model with Direct-Shift Gearbox (DSG). An AdBlue version offering 105 kW (143 PS) name BlueTDI is also produced. Availability varies by country.

A restyling to the CC was presented at the LA Auto Show, and production started in January 2012. The front and rear were revised to make the CC look similar to the current Volkswagen design, while the midsection is unchanged.

Interior changes included a minor design change to the center console, with an updated ACC control panel. This design is also used in the Passat Alltrack.

European engine options remain the same as for the 2011 Passat CC. Transmission options were carried over from the previous version, but the diesel automatic transmission now has with a free-wheel function that is claimed to reduce fuel consumption by disengaging the clutch when the driver lifts their foot from the accelerator.[13] The XDS electronic differential brake also used in the Golf GTI will be available as standard and optional equipment.[14]

Initially available only in V6 as an AWD alternative, but diesel versions became available during 2012. Availability of diesel 4WD varies by market.

As in North America, the Passat CC will from the 2012 restyling drop the Passat name and be called Volkswagen CC.[15][16]

The transmission in the V6 on the North American market is a regular torque converter transmission. whereas on other markets, such as the European, it is a DSG transmission.

In 2017, the CC will be replaced by the Arteon fastback.