WCPO-TV, channel 9, is an ABC-affiliated television station located in Cincinnati, Ohio, USA. WCPO-TV has been owned by the Cincinnati-based E. W. Scripps Company since its inception, and maintains studio and office facilities in the Mount Adams neighborhood of Cincinnati. The station's transmitter is located in the Mount Auburn section of the city.

WCPO station identification in 1991, while the station was a CBS affiliate.

The station first signed on the air at noon on July 26, 1949, and first face seen was Big Jim Stacey.[2] Originally operating on VHF channel 7; it was Cincinnati's third television station. The call letters came from The Cincinnati Post, who also owned WCPO radio (1230 AM, now WDBZ and 105.1 FM, now WUBE). The station was then owned by Scripps-Howard Newspapers.[3]

The station was originally a primary ABC affiliate and a secondary DuMont Television Network affiliate.[3] With DuMont's demise in 1956, WCPO was left with just ABC until it swapped affiliations with WKRC-TV (channel 12) in 1961, becoming a CBS affiliate.[4] This deal came because WKRC-TV's owner, Taft Broadcasting, had developed very good relations with ABC. Following the release of the FCC's Sixth Report and Order in 1952, all of Cincinnati's VHF stations changed channel positions.[5] WCPO was reassigned to channel 9, as the previous channel 7 allocation was shifted north to Dayton and later given to WHIO-TV.

On the early morning of October 15, 1980, WCPO and most of its news staff became part of a major news story when James Hoskins, armed with a 9mm J&R M68 semi-automatic rifle and five revolvers, seized control of WCPO's newsroom.[6] Hoskins held reporter Elaine Green and her cameraman at gunpoint in the parking lot of WCPO's studios. He then forced his way into the newsroom and took seven more hostages.

A self-described terrorist, Hoskins stated in a videotaped interview with Green that he had, among other things, murdered his girlfriend before arriving at the studios. After voicing his displeasure with local government, Hoskins ended by saying that he would let his hostages go, but only after they helped him to barricade himself in their newsroom in anticipation of a shootout with police. Green and the others pleaded with Hoskins to get help, but to no avail. WCPO's news staff ran special newscasts from the parking lot throughout that morning. Hoskins eventually let all the hostages go, and the standoff ended later that morning when Hoskins shot himself dead while on the phone with SWAT negotiators. Green was awarded a Peabody Award for her handling of the crisis.[7] She later married anchor and then-news director Al Schottelkotte. The two remained married until his death in 1996. 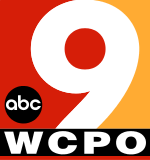 For three decades, WCPO had been one of CBS' strongest affiliates. However, in 1994, Scripps and ABC announced a long-term affiliation deal, which called for four Scripps-owned stations to switch their affiliation to ABC.[8] WCPO was included in the deal, which ABC agreed to as a condition of keeping its affiliation on Scripps' two largest stations, WXYZ-TV in Detroit and WEWS in Cleveland. Both of those stations had been heavily wooed by CBS, which was about to lose its longtime Detroit and Cleveland affiliates to Fox in a separate affiliation deal with New World Communications. However, while three other Scripps-owned stations included in the deal with ABC (WMAR-TV, WFTS-TV, KNXV-TV) switched to the network in December 1994 and January 1995, Scripps had to maintain the CBS affiliation on WCPO until WKRC's affiliation contract with ABC expired the following year. In the meantime, in October 1995, WCPO introduced new "9 Stands for News" station branding that shrunk the CBS logo and revamped its news graphics and theme music,[9] improving ratings.[10] On June 3, 1996, WKRC's contract ended and the two stations reversed the 1961 affiliation swap, with WCPO rejoining ABC and WKRC reuniting with CBS. WCPO set up a toll-free hotline to answer calls from confused viewers. The station debuted new on-air graphics designed by a Los Angeles firm.[11]

On May 15, 2004, WCPO moved its studios facilities from 500 Central Avenue to a new state-of-the-art building on Gilbert Avenue, in the Mount Adams neighborhood of Cincinnati.

Scripps' Cincinnati combination of WCPO and The Cincinnati Post ended when the newspaper ceased publication at the end of 2007. (Its Kentucky edition became an online-only publication simultaneously with the closure of the Post.) WCPO is the only major Cincinnati television station that has been under the same ownership since its inception, as well as the only major station in the market to remain owned by a locally based company.

The station's digital signal is multiplexed:

WCPO-TV discontinued regular programming on its analog signal, over VHF channel 9, on June 12, 2009, as part of the federally mandated transition from analog to digital television.[15] The station's digital signal remained on its pre-transition VHF channel 10,[16] using PSIP to display WCPO-TV's virtual channel as 9 on digital television receivers.

Since many viewers had reception issues after the digital transition, even with an increase of power just weeks after the transition, the station filed a Petition for Rulemaking to abandon VHF channel 10 and move to UHF channel 22.[17][18] On October 7, 2009, the FCC issued a "Notice of Proposed Rulemaking" for WCPO-TV, which gives the public 25 days to comment on the proposed channel change.[19] On December 10, 2009, the FCC issued a Report & Order, approving WCPO's move from VHF channel 10 to UHF channel 22.[20] On January 19, 2010, WCPO filed a minor change application for a construction permit for their new allotment. The FCC granted the construction permit on July 9.[21] At 2:05 a.m. on December 8, 2010, WCPO performed a flash-cut, turning off channel 10 and starting digital operations on channel 22. This flash-cut also included a power boost to 910 kW.[22]

WCPO produced The Uncle Al Show, a children's show that ran from the early 1950s to the mid-1980s.

WCPO-TV presently broadcasts 40½ hours of locally produced newscasts each week (with 6½ hours on weekdays and four hours each on Saturdays and Sundays). In recent years, WCPO and WKRC have been battling each other for first place in local news viewership, while NBC affiliate WLWT has been lagging behind in third or fourth place. Typically, WCPO leads the evening news race, while WKRC-TV leads in mornings and late evenings. Even after the affiliation switch in 1996 involving two of the strongest affiliates of their respective networks at the time, both stations have remained among the strongest affiliates of their current respective networks.

WCPO lacked a dedicated news department until 1959. Al Schottelkotte, a longtime columnist for The Cincinnati Enquirer (which was then owned by Scripps along with the Post), joined the station as its first news director and anchorman—a post he held until 1986. Within a year, WCPO was the undisputed local news leader in the Cincinnati market, and remained the top-rated station for over 20 years.

Consumer reporter John Matarese's reports have been syndicated to nine other stations, five of which are Scripps-owned, since 2003. However, as of October 12, 2010, Matarese's consumer reports have been aired on eleven other stations, the majority of which are Scripps owned.[23] On March 7, 2007 at 5:45 a.m., weekday morning anchor David Rose was pulled off the air for slurring his words; Rose was fired from the station three weeks later.[24]

Cincinnati's television stations have used their weather coverage as a selling point, especially since the Montgomery/Blue Ash tornado of 1999. WCPO brands its radars as "9 First Warning Doppler", "VIPIR 9" and "TrueView". The station runs its own radar located in Batavia, which has an average refresh time of ten seconds.

On July 1, 2003, WCPO began to operate a second Doppler weather radar out of the Clermont County Airport in Batavia. In combination with the radar located at WCPO's transmission tower site, both radars were named "Ultimate Doppler Radar", though the transmitter dome was eventually put out of service. The new radar operates at a height of 100 ft. with its base 834 ft. above sea level. Attenuation at the site leaves a radius around the radar blank.

In July 2007, WCPO launched a radar system with satellite imagery to allow fine street-level detail of weather events to specific locations. The TrueView system allows for local and nationwide radar sweeps. National Weather Service NEXRAD radars in Wilmington, Ohio (which covers Cincinnati, Dayton and Columbus from a central point, as is done in several areas of the country with multiple major cities), Indianapolis and Louisville are used to provide full-market coverage of severe weather events. The VIPIR 9 technology also utilizes the NEXRAD radars and 9 First Warning Doppler to create its 3D images.

WCPO's investigative unit, the I-Team, was created in 1988,[27] following the station's Peabody Award–winning investigation of Donald Harvey. The I-Team has won dozens of national awards,[28] including the 1992 Sigma Delta Chi Award and 1993 Alfred I. duPont–Columbia University Award for stories about fraudulent business practices.[29] In 1999, WCPO won the Peabody, duPont, and Sigma Delta Chi awards for investigations into the construction of Paul Brown Stadium.[30] The station won another Peabody in 2001 for a one-hour documentary, Visions of Vine Street, that aired in the wake of the 2001 riots.[27]

In 1967, WCPO introduced the Newsbird, the first news-gathering helicopter in Cincinnati and one of the first in the industry to feature live transmissions.[31][32] On January 17, 1983, the Bell 206B ran out of fuel and crashed outside the station.[33]

From 1996 to September 2000, WCPO leased a Bell 206L-3 LongRanger III helicopter out of Lunken Field.[34] Outfitted with several cameras, Chopper 9 was used for traffic reports, updates on construction of Paul Brown Stadium and Fort Washington Way, and Friday night football specials. The helicopter proved especially useful for covering the aftermath of the 1999 Blue Ash tornado. WCPO allowed the lease to expire in 2000, citing its high cost.[35]