This article is about the U.S. army surgeon. For other uses, see Walter Reed (disambiguation).

Major Walter Reed, M.D., U.S. Army, (September 13, 1851 – November 22, 1902) was a U.S. Army physician who in 1901 led the team that postulated and confirmed the theory that yellow fever is transmitted by a particular mosquito species, rather than by direct contact. This insight gave impetus to the new fields of epidemiology and biomedicine, and most immediately allowed the resumption and completion of work on the Panama Canal (1904–1914) by the United States. Reed followed work started by Carlos Finlay and directed by George Miller Sternberg ("first U.S. bacteriologist").

Walter Reed was born in Gloucester County, Virginia, to Lemuel Sutton Reed (a traveling Methodist minister) and his first wife, Pharaba White.[1] During his youth, the family resided at Murfreesboro, North Carolina with his mother's family during his father's preaching tours. Two of his elder brothers later achieved distinction: J.C. became a minister in Virginia like their father, and Christopher a judge in Wichita, Kansas and later St. Louis, Missouri,[2] Their childhood home is included in the Murfreesboro Historic District.[3]

After the American Civil War, Rev. Reed remarried, to Mrs. Mary C. Byrd Kyle of Harrisonburg, Virginia, with whom he would have a daughter. Young Walter enrolled at the University of Virginia. After two years, Reed completed the M.D. degree in 1869, two months before he turned 18 (he was the youngest then, and is still today the youngest student of the University of Virginia to receive an MD degree).[4]

Reed then enrolled at the New York University's Bellevue Hospital Medical College in Manhattan, New York, where he obtained a second M.D. in 1870, as his brother Christopher attempted to set up a legal practice. After interning at several New York City hospitals, Walter Reed worked for the New York Board of Health until 1875.

He married Emilie (born Emily) Lawrence of North Carolina on April 26, 1876 and took her West with him. Later, Emilie would give birth to a son and a daughter, and the couple also adopted a Native American girl while posted at frontier camps.[5]

Finding his youth limited his influence, and dissatisfied with urban life,[6] Reed joined the U.S. Army Medical Corps. This allowed him both professional opportunities and modest financial security to establish and support a family. After Reed passed a grueling 30-hour examination in 1875, the army medical corps enlisted him as an assistant surgeon. By this time, two of his brothers were working in Kansas, and Walter soon was assigned postings in the American West. Over the next 16 years, the Army assigned the career officer to different outposts, where he was responsible not only for American military and their dependents, but also various Native American tribes, at one point looking after several hundred Apaches, including Geronimo. Reed noticed the devastation epidemics could wreak and maintained his concerns about sanitary conditions. During one of his last tours, he completed advanced coursework in pathology and bacteriology in the Johns Hopkins University Hospital Pathology Laboratory.

In 1893, Reed joined the faculty of the George Washington University School of Medicine and the newly opened Army Medical School in Washington, D.C., where he held the professorship of Bacteriology and Clinical Microscopy. In addition to his teaching responsibilities, he actively pursued medical research projects and served as the curator of the Army Medical Museum, which later became the National Museum of Health and Medicine (NMHM). These positions also allowed Dr. Reed to break free from the fringes of the medical world.

In 1896, Reed first distinguished himself as a medical investigator. He proved that yellow fever among enlisted men stationed near the Potomac River was not a result of drinking the river water. He showed officials that the enlisted men who got yellow fever had a habit of taking trails through the local swampy woods at night. Their yellow fever-free fellow officers did not do so. Reed also proved that the local civilians drinking from the Potomac River had no relation to the incidence of the disease.[7]

Reed traveled to Cuba to study diseases in U.S. Army encampments there during the Spanish–American War. Appointed chairman of a panel formed in 1898 to investigate an epidemic of typhoid fever, Reed and his colleagues showed that contact with fecal matter and food or drink contaminated by flies caused that epidemic. Yellow fever also became a problem for the Army during this time, felling thousands of soldiers in Cuba.

In May 1900, Major Reed returned to Cuba when he was appointed head of the Army board charged by Surgeon General George Miller Sternberg to examine tropical diseases, including yellow fever. Sternberg was one of the founders of bacteriology during this time of great advances in medicine due to widespread acceptance of Louis Pasteur's germ theory of disease, as well as the methods of studying bacteria developed by Robert Koch. During Reed's tenure with the U.S. Army Yellow Fever Commission in Cuba, the board both confirmed the transmission by mosquitoes and disproved the common belief that yellow fever could be transmitted by clothing and bedding soiled by the body fluids and excrement of yellow fever sufferers – articles known as fomites. The board conducted many of its dramatic series of experiments at Camp Lazear, named in November 1900 for Reed's assistant and friend Jesse William Lazear, who had died two months earlier of yellow fever while on this assignment.

The risky but fruitful research work was done with human volunteers, including some of the medical personnel, such as Clara Maass, who allowed themselves to be deliberately infected. The research work with the disease under Reed's leadership was largely responsible for stemming the mortality rates from yellow fever during the building of the Panama Canal, something that had confounded the French attempts in that region only 20 years earlier.

Although Reed received much of the credit in history books for "beating" yellow fever, Reed himself credited Carlos Finlay with the discovery of the yellow fever vector, and thus how it might be controlled. Reed often cited Finlay's papers in his own articles and gave him credit for the discovery, even in his personal correspondence. The Cuban physician was a strong advocate of the transmission theory as the cause of yellow fever and discovered the type of mosquito that transmits yellow fever. His unsophisticated experiments that proved this were discounted by many, but were the basis of Reed's research.[8]

After Reed returned from Cuba in 1901, he continued to speak and publish on yellow fever. He received honorary degrees from Harvard and the University of Michigan in recognition of his seminal work. 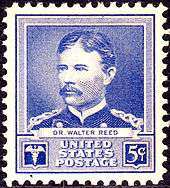 Reed's breakthrough in yellow fever research is widely considered a milestone in biomedicine, opening new vistas of research and humanitarianism. It was largely an extension of Carlos J. Finlay's work, carried out during the 1870s in Cuba, which finally came to prominence in 1900. Finlay was the first to theorize, in 1881, that a mosquito was a carrier, now known as a disease vector, of the organism causing yellow fever: a mosquito that bites a victim of the disease could subsequently bite and thereby infect a healthy person.[2] He presented this theory at the 1881 International Sanitary Conference, where it was well received. A year later Finlay identified a mosquito of the genus Aedes as the organism transmitting yellow fever.[1] His theory was followed by the recommendation to control the mosquito population as a way to control the spread of the disease. El Obelisco, Finlay's memorial in Havana

His hypothesis and exhaustive proofs were confirmed nearly twenty years later by the Walter Reed Commission of 1900. Although Dr. Reed received much of the credit in history books for "beating" yellow fever, Reed himself credited Dr. Finlay with the discovery of the yellow fever vector, and thus how it might be controlled. Dr. Reed often cited Finlay's papers in his own articles and gave him credit for the discovery in his personal correspondence. In the words of General Leonard Wood, a physician and U.S. military governor of Cuba in 1900: "The confirmation of Dr. Finlay's doctrine is the greatest step forward made in medical science since Jenner's discovery of the vaccination for smallpox."

This discovery helped William C. Gorgas reduce the incidence and prevalence of mosquito-borne diseases in Panama during the American campaign, from 1903 onwards, to construct the Panama Canal. Prior to this, about 10% of the workforce had died each year from malaria and yellow fever.

In 1912, he posthumously received the Walter Reed Medal for his yellow fever work, and it has since been named in his honor. A tropical medicine course is also named after him, Walter Reed Tropical Medicine Course. The National Library of Medicine in Bethesda, Maryland holds a collection of his papers regarding typhoid fever studies.[10] Philip Showalter Hench, a Nobel Prize winner for Physiology or Medicine in 1950, maintained a long interest in Walter Reed and yellow fever. His collection of thousands of items—documents, photographs, and artifacts—is at the University of Virginia in the Philip S. Hench Walter Reed Yellow Fever Collection.[11] More than 7,500 of these items, including several hundred letters written by Reed himself, are accessible online at the web exhibit devoted to this Collection.[12]

In addition to that medal, course, and a stamp issued in his honor (shown), locations and institutions named after the medical pioneer include: