A 2012 map of the world showing in red the places with least water security.

Water security has been defined as "the reliable availability of an acceptable quantity and quality of water for health, livelihoods and production, coupled with an acceptable level of water-related risks."[1] Sustainable development will not be achieved without a water secure world. A water secure world integrates a concern for the intrinsic value of water with a concern for its use for human survival and well-being. A water secure world harnesses water's productive power and minimises its destructive force. Water security also means addressing environmental protection and the negative effects of poor management. It is also concerned with ending fragmented responsibility for water and integrating water resources management across all sectors – finance, planning, agriculture, energy, tourism, industry, education and health. A water secure world reduces poverty, advances education, and increases living standards. It is a world where there is an improved quality of life for all, especially for the most vulnerable—usually women and children—who benefit most from good water governance.[2]

According to the Pacific Institute "While regional impacts will vary, global climate change will potentially alter agricultural productivity, freshwater availability and quality, access to vital minerals, coastal and island flooding, and more. Among the consequences of these impacts will be challenges to political relationships, realignment of energy markets and regional economies, and threats to security".[3]

It impacts regions, states and countries. Tensions exist between upstream and downstream users of water within individual jurisdictions.[4]

During history there has been much conflict over use of water from rivers such as the Tigris and Euphrates Rivers.[5] Another highly politicized example is Israel's control of water resources in the Levant region since its creation,[6] where Israel securing its water resources was one of several drivers for the 1967 Six Day War.

Water allocation between competing users is increasingly determined by application of market-based pricing for either water licenses or actual water.[7]

Water, in absolute terms, is not in short supply planet-wide. But, according to the United Nations water organization, UN-Water, the total usable freshwater supply for ecosystems and humans is only about 200,000 km3 of water – less than one percent (<1%) of all freshwater resources. And, water use has been growing at more than twice the rate of the population increase in the last century. Specifically, water withdrawals are predicted to increase by 50 percent by 2025 in developing countries, and 18 per cent in developed countries. By 2025, 1.8 billion people will be living in countries or regions with absolute water scarcity, and two-thirds of the world population could be under stress conditions.[8] 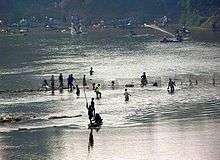 According to Nature (2010), about 80% of the world's population (5.6 billion in 2011) live in areas with threats to water security. The water security is a shared threat to human and nature and it is pandemic. Human water-management strategies can be detrimental to wildlife, such as migrating fish. Regions with intensive agriculture and dense populations, such as the US and Europe, have a high threat of water security. Water is increasingly being used as a weapon in conflict.[9] Water insecurity is always accompanied by one or more issues such as poverty, war and conflict, low women’s development and environmental degradation.[10] Researchers estimate that during 2010-2015, ca US$800 billion will be required to cover the annual global investment in water infrastructure. Good management of water resources can jointly manage biodiversity protection and human water security. Preserving flood plains rather than constructing flood-control reservoirs would provide a cost-effective way to control floods while protecting the biodiversity of wildlife that occupies such areas.[11]

Lawrence Smith, the president of the population institute, asserts that although an overwhelming majority of the planet's surface is composed of water, 97% of this water is constituted of saltwater; the fresh water used to sustain humans is only 3% of the total amount of water on Earth.[12] Therefore, Smith believes that the competition for water in an overpopulated world would pose a major threat to human stability,[12] even going so far as to postulate apocalyptic world wars being fought over the control of thinning ice sheets and nearly desiccated reservoirs.[12] Nevertheless, 2 billion people have supposedly gained access to a safe water source since 1990 who may have earlier lacked it.[13] The proportion of people in developing countries with access to safe water is calculated to have improved from 30 percent in 1970[14] to 71 percent in 1990, 79 percent in 2000 and 84 percent in 2004, parallel with rising population. This trend is projected to continue.[13]

The Earth has a limited though renewable supply of fresh water, stored in aquifers, surface waters and the atmosphere. Oceans are a good source of usable water, but the amount of energy needed to convert saline water to potable water is prohibitive with conventional approaches, explaining why only a very small fraction of the world's water supply is derived from desalination.[15] However, modern technologies, such as the Seawater Greenhouse, use solar energy to desalinate seawater for agriculture and drinking uses in an extremely cost-effective manner. 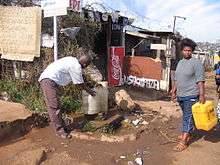 Based on the map published by the Consultative Group on International Agricultural Research (CGIAR),[16] the countries and regions suffering most water stress are North Africa, the Middle East,[17] India, Central Asia, China, Chile, Colombia, South Africa and Australia. Water scarcity is also increasing in South Asia.[18]

More than 50 countries on five continents are said to be at risk of conflict over water.[19]

Turkey's Southeastern Anatolia Project (Guneydogu Anadolu Projesi, or GAP) on the Euphrates has potentially serious consequences for water supplies in Syria and Iraq.[5]

China, is constructing dams on the Mekong, leaving Vietnam, Laos, Cambodia and Thailand without same amout of water as before investment. A huge project of reversing the flow of the Brahmaputra (Chinese: Tsangpo) river, which after leaving Chinese Tibet flows through India and Bangladesh. The struggle for water in some afflicted regions has led inhabitants to hiring guards in order to protect wells. Moreover, Amu Daria River, shared by Uzbekistan, Turkmenistan, Tajikistan and Afghanistan, which has been nearly completely dried out, so much so that it has ceased to reach the Aral Sea/Lake, which is evaporating in an alarming pace. The fact that Turkmenistan retains much of the water before it flows into Uzbekistan.[20]

In Australia there is competition for the resources of the Darling River system between Queensland, New South Wales and South Australia.

In Victoria, Australia a proposed pipeline from the Goulburn Valley to Melbourne has led to protests by farmers.[21]

The Snowy Mountains Scheme diverted water from the Snowy River to the Murray River and the Murrumbidgee River for the benefit of irrigators and electricity generation through hydro-electric power. During recent years government has taken action to increase environmental flows to the Snowy in spite of severe drought in the Murray Darling Basin. The Australian Government has implemented buy-backs of water allocations, or properties with water allocations, to endeavour to increase environmental flows.

Main articles: Water supply and sanitation in India, Pollution of the Ganges, and Energy policy of India

In India, there is competition for water resources of all inter state rivers except the main Brahmaputra river among the riparian states of India and also with neighbouring countries which are Nepal, China, Pakistan, Bhutan, Bangladesh, etc.[22] Vast area of the Indian subcontinent is under tropical climate which is conducive for agriculture due to favourable warm and sunny conditions provided perennial water supply is available to cater to the high rate of evapotranspiration from the cultivated land. Though the overall water resources are adequate to meet all the requirements of the subcontinent, the water supply gaps due to temporal and spatial distribution of water resources among the states and countries in the subcontinent are to be bridged.

There is intense competition for the water available in the inter state rivers such as Kavery, Krishna, Godavari, Vamsadhara, Mandovi, Ravi-Beas-Sutlez, Narmada, Tapti, Mahanadi, etc. among the riparian states of India in the absence of water augmentation from the water surplus rivers such as Brahmaputra, Himalayan tributaries of Ganga and west flowing coastal rivers of western ghats. All river basins face severe water shortage even for drinking needs of people, cattle and wild life during the intense summer season when the rainfall is negligible.

Water security can be achieved along with energy security as it is going to consume electricity to link the surplus water areas with the water deficit areas by lift canals, pipe lines, etc.[23] The total water resources going waste to the sea are nearly 1200 billion cubic meters after sparing moderate environmental / salt export water requirements of all rivers.[24] Interlinking rivers of the subcontinent is possible to achieve water security in the Indian subcontinent with the active cooperation of the countries in the region. 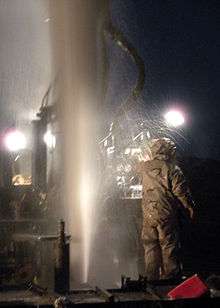 Blue Peace is a method which seeks to transforms trans-boundary water issues into instruments for cooperation. This unique approach to turn tensions around water into opportunities for socio-economic development was developed by Strategic Foresight Group in partnership with the Governments of Switzerland and Sweden.

“The Blue Peace is an innovative approach to engage political leaders, diplomats and populations in harnessing and managing collaborative solutions for sustainable water management.” – Foreign Minister Didier Burkhalter of Swirtzerland, speaking at the UN General Assembly 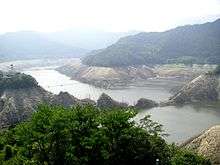 Due to record low rainfall in Summer 2005, the reservoir behind Sameura Dam runs low. The reservoir supplies water to Takamatsu, Shikoku Island, Japan.

As new technological innovations continue to reduce the capital cost of desalination, more countries are building desalination plants as a small element in addressing their water crises.[25]

A January 17, 2008, article in the Wall Street Journal states, "World-wide, 13,080 desalination plants produce more than 12 billion gallons of water a day, according to the International Desalination Association." [38]

The world's largest desalination plant is the Jebel Ali Desalination Plant (Phase 2) in the United Arab Emirates. It is a dual-purpose facility that uses multi-stage flash distillation and is capable of producing 300 million cubic meters of water per year.[39]

However, given the energy intensive nature of desalination, with associated economic and environmental costs, desalination is generally considered a last resort after water conservation. But this is changing as prices continue to fall.

According to MSNBC, a report by Lux Research estimated that the worldwide desalinated water supply will triple between 2008 and 2020.[42]

However, not everyone is convinced that desalination is or will be economically viable or environmentally sustainable for the foreseeable future. Debbie Cook, the former mayor of Huntington Beach, California, has been a frequent critic of desalination proposals ever since she was appointed as a member of the California Desalination Task Force. Cook claims that in addition to being energy intensive, desalination schemes are very costly—often much more costly than desalination proponents claim. In her writing on the subject, Cook points to a long list of projects that have stalled or been aborted for financial or other reasons, and suggests that water-stressed regions would do better to focus on conservation or other water supply solutions than to invest in desalination plants.[43]

A novel approach to desalination is the Seawater Greenhouse which takes seawater and uses solar energy to desalinate it in conjunction with growing food crops in a specially adapted greenhouse.