The non-Indo-European substrate theory was first proposed by Sigmund Feist in 1932, who estimated that roughly a third of Proto-Germanic lexical items came from a non-Indo-European substrate and that the supposed reduction of the Proto-Germanic inflectional system was the result of pidginization with that substrate.[1] Which culture or cultures may have contributed the substrate material is an ongoing subject of academic debate and study. Notable candidates for possible substrate culture(s) are the Maglemosian and Funnelbeaker culture but also older cultures of northern Europe like the Hamburgian or even the LRJ (Lincombian-Ranisian-Jerzmanowician).

The non-Indo-European substrate hypothesis attempts to explain the anomalous features of proto-Germanic as a result of creolization between an Indo-European and a non-Indo-European language. Germanicist John A. Hawkins sets forth the arguments for a Germanic substrate. Hawkins argues that the proto-Germans encountered a non-Indo-European speaking people and borrowed many features from their language. He hypothesizes that the first sound shift of Grimm's Law was the result of non-native speakers attempting to pronounce Indo-European sounds, and that they resorted to the closest sounds in their own language in their attempt to pronounce them. The Battle-axe people are an ancient culture identified by archaeology who have been proposed as candidates for the people who influenced Germanic with their non-Indo-European speech. However, this culture was spread through a wider range of regions across eastern and central Europe, already close to or in contact with areas inhabited by Indo-European speakers and their putative area of origin, and none of the Indo-European proto-languages thus produced, or their succeeding languages, developed along the much larger line of extension of the Battle-axe people – be they Celto-Italic, Illyrian, Slavic, Baltic and others – appear to have been affected by the same changes limited to the Proto-Germanic. Alternatively, in the framework of the Kurgan hypothesis, the Battle-axe people may be seen as an already "kurganized" culture built on the substrate of the earlier Funnelbeaker culture.

A number of root words for modern European words seem to limit the geographical origin of these Germanic influences, such as the root word for ash (the tree) and other environmental references suggest a limited root stream subset which can be localized to northern Europe.[4]

Kalevi Wiik, a phonologist, has put forward a hypothesis – generally rejected by specialists in the field, however – that the pre-Germanic substrate was of a non-Indo-European Finnic origin. Wiik claimed that there are similarities between mistakes in English pronunciation typical of Finnish speakers and the historical sound changes from Proto-Indo-European to proto-Germanic.[5][6] Wiik's argument is based on the assumption that only three language groups existed in pre-Indo-European Europe, namely Uralic, Indo-European, and Basque, corresponding to three ice age refugia. Then, Uralic speakers would have been the first to settle most of Europe, and the language of the Indo-European invaders was influenced by the native Uralic population, producing the Germanic proto-language.[5][6]

Existing evidence of languages outside the three refugia that he proposes (e. g., the Tyrsenian language family) creates a complication for Wiik's theory, meaning it relies upon an undemonstrated link between each of these languages and one of the three proto-languages he proposes. Moreover, his thinking relies on an interpretation of Indo-European origins different from the mainstream and, most challenging, a picture of the linguistic landscape of Neolithic Europe regarded as improbable by most experts.

Theo Vennemann has hypothesized a Basque substrate and a Semitic superstrate in Germanic;[4] however, his speculations, too, are generally rejected by specialists in the relevant fields.

Words claimed to be derived from non-Indo-European languages

Hawkins moreover asserts that more than one third of the native Germanic lexicon is of non-Indo-European origin, and again points to the hypothetical substrate language as the cause. Certain lexical fields are dominated by non-Indo-European words according to Hawkins. Seafaring terms, agricultural terms, engineering terms (construction/architecture), words about war and weapons, animal and fish names, and the names of communal and social institutions are centers of non-Indo-European words according to Hawkins. Some English language examples given by Hawkins include:

Many of Hawkins's purported non-etymologies are controversial. One obvious way to refute the Germanic substrate hypothesis is to find Indo-European etymologies for the words on Hawkins's list. This process continues, but several cited as examples by Hawkins can likely be eliminated. For example, it is generally agreed that helmet represents IE *ḱel- ‘to hide, conceal’ (cf. Sanskrit śárman ‘shelter, cover’,[10] Thracian zalmós ‘hide’[11]).[12] East relates to IE *h2eus- ‘dawn’.[13]

Some of the words may have Indo-European derivations that are simply not well preserved in other Indo-European languages. For example, it has been suggested that wife is related to Tocharian B kwīpe ‘shame; vulva’,[14] from a reconstructed root *gʷʰíh2bʰo-.[15] Other possible etymologies include:

Similarly, the word "bear" may not be unique to Germanic languages. In Russian, a bear's lair is berloga, sometimes etymologized as "the lair of ber". Others hold that berloga could be derived from a proto-Slavic word for 'swamp' that also influenced the originally West Slavic origin of the city name Berlin as a "town built on swampy grounds". A number of Slavic languages have cognates of medved for "bear", which meant "honey-eater" < *medʰu + *ed- (though was later taken to mean "honey-knower" by folk etymology). This suggests that a possible ancient Slavic word ber may have been replaced by a euphemism. However, supporters of the Germanic substrate hypothesis such as Max Vasmer explain the obvious relation between berloga and the Germanic word for 'bear' by the fact that early Old Norse influences on East Slavic languages cannot be disregarded — see the prevalent Normanist theory regarding the Varangian origin of the Rus people from Scandinavia, from whom also the name of Russia is derived.

Calvert Watkins's 1969 appendix of Indo-European roots in the American Heritage Dictionary listed several roots that were believed to be unique to Germanic at that time. More recent editions have substantially reduced the number of roots claimed to be uniquely Germanic.

More recent treatments of Proto-Germanic tend to reject or simply omit discussion of the Germanic substrate hypothesis. Joseph B. Voyles's Early Germanic Grammar makes no mention of the hypothesis, nor do many recent publications on the Germanic language family.

Nonetheless, the hypothesis remains popular in some circles, such as the Leiden school of historical linguistics. The first etymological dictionary of any language to systematically take the hypothesis into its discussions is the new Dutch dictionary influenced by the thinking of the Leiden group: Marlies Philippa et al. (ed), Etymologisch woordenboek van het Nederlands, Amsterdam University press, in 4 volumes, 2003–2009.

Centum-satem hybridisation as conjectured cause

It has been suggested that Proto-Germanic arose as a hybrid of two Indo-European dialects, from the Centum and Satem types respectively. 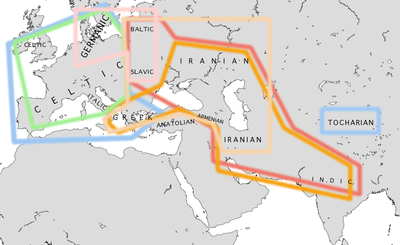 As this map of Indo-European isoglosses shows, the Proto-Germanic language is classified as a centum language (green border), but also shares phonological properties with the Baltic and Slavic languages (pink border) which are satem languages.

This hypothesis may help to explain difficulties in the classification of Germanic languages. They are classified as Centum languages, because of the sound correspondences, exemplified in the formations *hund- (e.g. "hundred", ~ centum with a velar fricative according to Grimm's law) and *hwis(e.g. "who", ~ Latin quis), rather than !sund and !his respectively. However, the Germanic languages, in common with the Baltic and Slavic families, both of which are Satem, are more likely to feature -m- (as opposed to *-bh-) in instrumental, dative, and ablative plurals, as well as certain singulars and duals (see the map of Indo-European isoglosses, right).

However, the above features may just as easily be explained by a non-Indo-European substrate common to proto-Germanic and proto-Balto-Slavic.