Greenlandic Norse is an extinct North Germanic language that was spoken in the Norse settlements of Greenland until their demise in the late 15th century. The language is attested through some 80 runic inscriptions, many of which are difficult to date and not all of which were necessarily carved by people born in Greenland.[1]

It is difficult to identify specifically Greenlandic linguistic features in the limited runic material. Nevertheless, there are inscriptions showing the use of t for historical þ in words such as torir rather than þorir and tana rather than þana. This linguistic innovation has parallels in West Norwegian in the late medieval period.[1] On the other hand, Greenlandic appears to have retained some features which changed in other types of Scandinavian. This includes initial hl and hr, otherwise only preserved in Icelandic, and the long vowel œ, which merged with æ in Icelandic but was preserved in Norwegian.[2]

Greenlandic Norse is believed to have been in language contact with Greenlandic, the language of the indigenous Kalaallit, and to have left loanwords in that language. In particular, the Greenlandic word Kalaaleq (older Karaaleq), meaning Greenlander, is believed to be derived from the word Skrælingr, the Norse term for the people they encountered in North America.[3] It has also been suggested that the word kona, meaning woman, is of Norse origin.[4]

The available evidence does not establish the presence of language attrition, the language most likely disappeared with the ethnic group that spoke it.[1]

A main characteristic of Greenlandic Norse was that it was very conservative. The older forms of speaking, which had come from Iceland and Norway, were kept intact. In keeping with this conservatism, the Greenlanders likewise maintained the older runic characteristics, most of which had fallen out of use in other countries. Notwithstanding this, they created new designs for the ð-, b-, p- and r-runes.[5]

The Kingittorsuaq Runestone dates from c. 1300, discovered near Upernavik, far north of the Norse settlements. It was presumably carved by Norse explorers. 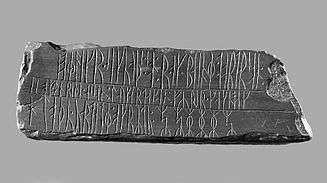