For use of this rank in other countries, see Colonel.

Colonel (Col) is a rank of the British Army and Royal Marines, ranking below brigadier, and above lieutenant colonel. British colonels are not usually field commanders; typically they serve as staff officers between field commands at battalion and brigade level. The insignia is two diamond-shaped pips (properly called "Bath Stars") below a crown. The crown has varied in the past with different monarchs; the current Queen's reign has used St Edward's Crown. The rank is equivalent to captain in the Royal Navy and group captain in the Royal Air Force.

The rank of colonel was popularized by the tercios that were employed in the Spanish Army during the 16th and 17th centuries. General Gonzalo Fernández de Córdoba divided his troops in to coronelías (meaning "column of soldiers" from the Latin, columnella or "small column")[1]). These units were led by a coronel.[2] This command structure and its titles were soon adopted as colonello in early modern Italian and in Middle French as coronel.

The modern English pronunciation of the word is derived from the French variant.[3]

By the end of 17th century in Great Britain, the "colonel of a regiment" was often a titled person who had been given Royal Assent to raise it for service and command it in battle. As such, he was required to cover all costs of the regiment's equipment, uniforms and wages as well select its officers.[4] Until the late 18th century most British regiments were commonly known by the name of the colonelcy, for example Lord Churchill's Dragoons (1683–1685) or Elliot's Light Horse (1759–66).

By the start of the American Revolutionary War most English and Welsh regiments in the standing army of Great Britain were named numerically, although some independent Highland regiments — such as MacLeod's Highlanders — were raised in the name of their colonel for service in West Africa and India. The change from a colonelcy based on patronage was because the British Army's administration had been reformed into three administrative bodies:

The reforms meant that the British government was now financially responsible for the pay, clothing and equipment of the troops in the service of the British Crown. Colonels were also no longer permitted to profit directly from the sale of officer commissions in their regiments.[4] A lieutenant-colonel commanded the regiment in battle.[4]

By the beginning of the Napoleonic Wars, the title "colonel of the regiment" had become a sinecure appointment for distinguished generals and members of the royal family or British nobility. Despite an individual only being permitted to hold one colonelcy, it was a profitable position as they were in financial charge of their regiment's allowance from the government. This meant they could hope to make a profit on the funds allocated for equipment, supplies and uniforms. As generals were mostly on half-pay, a colonelcy was a method of providing them with extra income. However it should be noted that many colonels spent large sums of their own money on their regiments.

By the end of the 19th century, the reorganisation of the British Army through the Cardwell and Childers Reforms had established a colonel as a professional rank with senior administrative responsibilities in regiment or brigade.

Some of the historic duties associated with the title Colonel of the Regiment (to distinguish it from the military rank of colonel) continue to be used in the modern British Army. The ceremonial position is often conferred on retired general officers, brigadiers or colonels who have a close link to a particular regiment. Non-military personnel, usually for positions within the Army Reserve may also be appointed to the ceremonial position. When attending functions as "Colonel of the Regiment", the titleholder wears the regimental uniform with rank insignia of (full) colonel, regardless of their official rank. A member of the Royal Family is known as a Royal Colonel. A Colonel of the Regiment is expected to work closely with a regiment and its Regimental Association.

Another title employed by the British Army is "Colonel-in-Chief" which is distinct from the ceremonial title "Colonel of the Regiment". The position is usually held by a member of the Royal Family who acts as a patron to the unit, as Princess Margaret, Countess of Snowdon did for the Bermuda Regiment. Although they do not have an operational role, they are kept informed of all important activities undertaken by the regiment and pay occasional visits to its operational units. The chief purpose of a Colonel-in-Chief is to maintain a direct link between a given regiment and the British Royal Family.

The Royal Navy once conveyed the honorific title "Colonel of Marines" to post-captains as a reward for highly distinguished service. It was a salaried sinecure position with no additional obligations outside a captain's normal naval duties. He would lose this title and its additional pay upon reaching flag rank. Horatio Nelson was given such a colonelcy in 1795, two years before he reached flag rank.[8]

From 1 April 1918 to 31 July 1919, the Royal Air Force maintained the rank of colonel. It was superseded by the rank of group captain the following day.

When badges of rank were introduced for field officers in 1810, full colonels were designated with a crown and star worn on shoulder epaulettes. In 1855, after the Crimean War, new dress regulations were published which specified changes where rank would be worn. Thereafter full colonels wore half-inch regimental pattern laces on upper and lower collar, with one crown and one star. In 1880 the insignia was moved to the shoulder boards when in full dress, and full colonels were given an extra star. The pattern of a crown above two stars has remained the identifying insignia from 1880 to the present day although it has variously been worn on the shoulder, cuff and chest.

During World War I, colonels wore the following cuff badges: 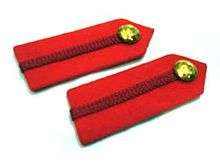 The insignia is two diamond-shaped pips (properly called "Bath Stars") below a crown. Gorget patches, colloquially known as red tabs, with crimson lace and a brass button are also worn.[9]