Willie Park Jr. (4 February 1864 – 22 May 1925) was one of the top professional golfers of his era, winning The Open Championship twice.[1] Park was also a successful golf equipment maker and golf writer. In his later years, Park built a significant career as one of the world's best golf course architects, with a worldwide business. He was inducted into the World Golf Hall of Fame in 2013.[2]

Park was born in Musselburgh, Scotland (near Edinburgh) on 4 February 1864.[3] His father, Willie Park Sr., was one of Scotland's top golfers, who won the first Open Championship in 1860[4] and Park Jr. learned golf from childhood. His father ran a successful golf equipment business, producing clubs and balls to order. Park Sr. also played challenge matches for stakes, and competed in professional tournaments.

The Musselburgh Links course in the family's home town was one of the main centres of golf at the time, and was on the rota for The Open Championship from 1873 to 1891. In 1892 it was removed from the rota in favor of Muirfield, a new course which became the home of the Honourable Company of Edinburgh Golfers. Willie Park Sr. won the first Open Championship in 1860, and won it again three more times. Mungo Park, younger brother of Park Sr., also won the Open in 1874. The Park family had a deep and fierce golf rivalry, both in competition and in business, with the Morris family (led by Old Tom Morris and Young Tom Morris) of St. Andrews during most of the 19th century.

Park caddied and played golf professionally, in stakes matches and tournaments, from his mid-teens. He developed his golf skills and played in his first Open Championship in 1880, at age 16, at which time he was already one of Scotland's best players. He worked in the family golf equipment business. Park won the Open in 1887 and 1889. In the latter year he was taken to a playoff by Andrew Kirkaldy. During his competitive career, Park placed in the top ten 12 times at the Open, and was out of the top eight only twice between 1881 and 1892. He was notable for his excellent short game, which compensated for a sometimes unreliable long game. He is famous for the saying: "A man who can putt is a match for anyone."

At the time, it was very difficult, if not impossible, for a golfer to make a living from prize money alone. Park often played challenge matches. He took over the family ball and club making business, establishing an export business just when golf was beginning to spread internationally. He patented several golf club designs.

Park's The Game of Golf (1896) was the first book about golf written by a professional golfer. It was well received, and has proven continuously popular since, being available in a modern, unabridged edition from Arcturus Publishers (2010). Park's second book, The Art of Putting, was published in 1920.

He also worked as a golf course designer, with 170 designs to his credit in the British Isles, Europe, the US and Canada. Park entered this profession, while winding down his competitive play, in his mid-30s, just as golf was beginning an enormous increase in popularity in North America. New golfers needed new courses to play, and Park took advantage of the opportunities. His services were much in demand, and he became one of the first people, along with fellow Scot Donald Ross, to become a full-time golf course architect.

Park's first well-known design was the Old Course of the Sunningdale Golf Club near London, just at the turn of the 20th century. This club's brilliant success on heathland property, which earlier had been thought unsuitable for golf, brought him worldwide fame.[5] Sunningdale Old has frequently been ranked among the world's top courses.

Park's final course design was in Maine at the Castine Golf Club in Castine, Maine.

Overwork on his design business led to a decline in health and his eventual death, at age 61 on 22 May 1925.[7] His health had been in decline for some time; Park knew he was dying, and traveled home from the United States to Scotland, in order to die in his home country.[5] He died in Edinburgh, although his "usual residence" was given as Musselburgh.[7] 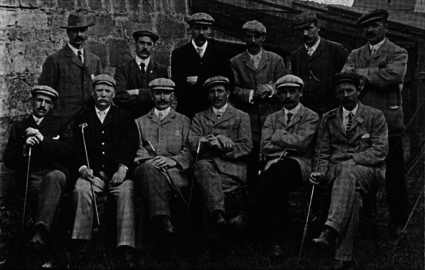 A group photo of Scotland's 1903 international golf team. Park is standing in the back row, second from the right. They defeated the English team that year.

1 Park defeated Kirkaldy by five strokes in a 36-hole playoff.