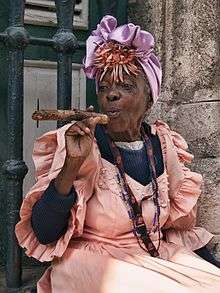 In Cuba, women have equal constitutional rights as men in the economic, political, cultural and social fields, as well as in the family. According to Article 44 of the Cuban Constitution, "The state guarantees women the same opportunities and possibilities as men in order to achieve woman’s full participation in the development of the country."[2] Women hold 48.9% of the parliamentary seats in the Cuban National Assembly ranking sixth of 162 countries on issues of female participation in political life.[3] There has been only one candidate per seat and the National Candidacy Commission decides the persons.[4][5][6][7]

In the first half of the 20th Century, women in Cuba had achieved a status comparable with that of other Latin American countries, such as Argentina and Chile. In 1933, during the 100-day government of Ramón Grau, Cuban women received the vote. In 1934 the percentages of Cuban women working outside the home, attending school, and practicing birth control surpassed the corresponding percentages in nearly every other Latin American country.

Women in Cuba had been elected to Cuba's House of Representatives and Senate, serving as mayors, judges, cabinet members, municipal counselors, and members of the Cuban foreign service. The return of Grau to government, under the auspices of President Fulgencio Batista provided for the Cuban Constitution of 1940, one of the most progressive in the Western Hemisphere with regard to women's status, prohibiting discrimination on the basis of sex and calling for equal pay for equal work. According to Cuban government statistics, women represent 49.5% of all graduates at higher educational levels and 62% of university students. Women constitute 35% of Parliamentary members, 61% of attorneys, 49% of judges, and 47% of Supreme Court justices.

After the Cuban Revolution of 1959, the Federation of Cuban Women (FMC) was established as an NGO. The FMC was recognized by the Cuban government as "the national mechanism for the advancement of women in Cuba". The organization claims to have more than 3 million members, which constitutes 85.2% of all women over age 14. There is also a Women’s Training Center and a Women’s Publishing House at the national level. The group generally adheres to the Cuban government's objectives "to defend the Cuban Revolution".

Since the "Special Period in the Times of Peace" in the 1990s, women have stepped to the forefront of life in Cuba, calling for a step towards an existence without sexism. Sexism in Cuba goes hand in hand with the racism experienced by Afro-Cubans.[8] Black women receive the lowest paying jobs and have the highest rates of unemployment and he lowest education levels. They often live with the threat of gender violence.

Hip-hop, more specifically rap, has become the vehicle for Cuban women to express their dissatisfaction with race and gender status in Cuba. The lyrics of all female Cuban rap groups Krudas Cubensi and Obsesion ask for respect for diversity on the music scene and sympathy for women who have turned to prostitution for economic rescue. During the "Special Period", women came to the forefront in managing different economic and domestic situations and in doing so, assumed more responsibility and new authority. The popular dance style "perreo" can be seen as a symbol of this change, with women in front of men during the dance.[9] Promotion of female hip-hop artists is currently not on the same level as their male counterparts. However, through the support of the Cuban Rap Agency and specifically Magia López, the head of the agency, this may change. López is currently working to increase the participation of women in the Cuban hip-hop scene.[10]

Across the world, people are concerned about the feminization of poverty. Seven out of every ten poor people are women or girls, according to a study carried out by the World Food Program (WFP). Nonetheless, there has been an increase in the number of women in the technical and professional work force in Cuba, where women represent 45% of the scientific and technical sector. More than 70% of bank employees are women, while they represent 43.9% of the work force in joint ventures. More than 50% of the workforce in the Ministry of Public Health is female. The National Association of Innovators and Rationalizes also sees the contribution and participation of women on the rise, and women have won outstanding prizes in the national forums held by this organization.