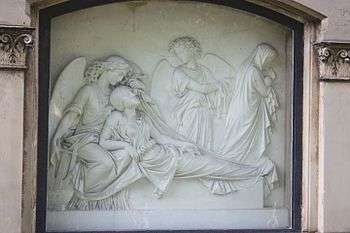 A mother dies and is taken by angels as her new-born child is taken away, A grave from 1863 in Striesener Friedhof in Dresden

Maternal death is defined by the World Health Organization (WHO) as "the death of a woman while pregnant or within 42 days of termination of pregnancy, irrespective of the duration and site of the pregnancy, from any cause related to or aggravated by the pregnancy or its management but not from accidental or incidental causes."[1]

The world mortality rate has declined 45% since 1990, but still every day 800 women die from pregnancy or childbirth related causes.[2] According to the United Nations Population Fund (UNFPA) this is equivalent to "about one woman every two minutes and for every woman who dies, 20 or 30 encounter complications with serious or long-lasting consequences. Most of these deaths and injuries are entirely preventable."[2]

UNFPA estimated that 289,000 women died of pregnancy or childbirth related causes in 2013.[2] These causes range from severe bleeding to obstructed labour, all of which have highly effective interventions . As women have gained access to family planning and skilled birth attendance with backup emergency obstetric care, the global maternal mortality ratio has fallen from 380 maternal deaths per 100,000 live births in 1990 to 210 deaths per 100,000 live births in 2013, and many countries halved their maternal death rates in the last 10 years.[2]

Worldwide mortality rates have been decreasing in modern age . High rates still exist, particularly in impoverished communities with over 85% living in Africa and Southern Asia.[2] The effect of a mother's death results in vulnerable families and their infants, if they survive childbirth, are more likely to die before reaching their second birthday.[2]

The most common causes are postpartum bleeding (15%), complications from unsafe abortion (15%), hypertensive disorders of pregnancy (10%), postpartum infections (8%), and obstructed labour (6%).[4] Other causes include blood clots (3%) and pre-existing conditions (28%).[5] Indirect causes are malaria, anaemia,[6] HIV/AIDS, and cardiovascular disease, all of which may complicate pregnancy or be aggravated by it .

Maternal mortality ratio (MMR): the ratio of the number of maternal deaths during a given time period per 100,000 live births during the same time-period.[12] The MMR is used as a measure of the quality of a health care system.

Maternal mortality rate (MMRate): the number of maternal deaths in a population divided by the number of women of reproductive age, usually expressed per 1,000 women.[12] 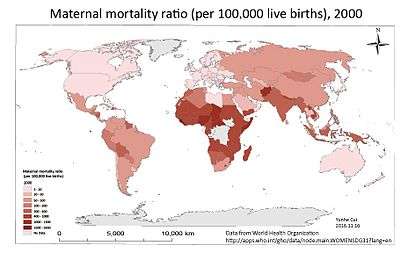 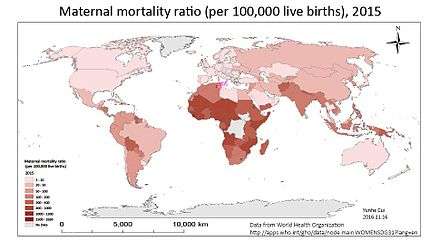 The death rate for women giving birth plummeted in the twentieth century. The historical level of maternal deaths is probably around 1 in 100 births.[23] Mortality rates reached very high levels in maternity institutions in the 1800s, sometimes climbing to 40 percent of birthgiving women (see Historical mortality rates of puerperal fever). At the beginning of the 1900s, maternal death rates were around 1 in 100 for live births. Currently, there are an estimated 275,000 maternal deaths each year.[24] Public health, technological and policy approaches are steps that can be taken to drastically reduce the global maternal death burden.

Four elements are essential to maternal death prevention, according to UNFPA.[2] First, prenatal care. It is recommended that expectant mothers receive at least four antenatal visits to check and monitor the health of mother and fetus. Second, skilled birth attendance with emergency backup such as doctors, nurses and midwives who have the skills to manage normal deliveries and recognize the onset of complications. Third, emergency obstetric care to address the major causes of maternal death which are hemorrhage, sepsis, unsafe abortion, hypertensive disorders and obstructed labour. Lastly, postnatal care which is the six weeks following delivery. During this time bleeding, sepsis and hypertensive disorders can occur and newborns are extremely vulnerable in the immediate aftermath of birth. Therefore, follow-up visits by a health worker to assess the health of both mother and child in the postnatal period is strongly recommended.

The decline in maternal deaths has been due largely to improved asepsis, fluid management and blood transfusion, and better prenatal care.

Technologies have been designed for resource poor settings that have been effective in reducing maternal deaths as well. The non-pneumatic anti-shock garment is a low-technology pressure device that decreases blood loss, restores vital signs and helps buy time in delay of women receiving adequate emergency care during obstetric hemorrhage.[25] It has proven to be a valuable resource. Condoms used as uterine tamponades have also been effective in stopping post-partum hemorrhage.[26] 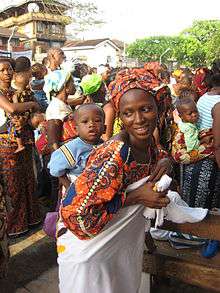 Most maternal deaths are avoidable, as the health-care solutions to prevent or manage complications are well known. Improving access to antenatal care in pregnancy, skilled care during childbirth, and care and support in the weeks after childbirth will reduce maternal deaths significantly . It is particularly important that all births be attended by skilled health professionals, as timely management and treatment can make the difference between life and death. To improve maternal health, barriers that limit access to quality maternal health services must be identified and addressed at all levels of the health system.[27] Recommendations for reducing maternal mortality include access to health care, access to family planning services, and emergency obstetric care, funding and intrapartum care.[28] Reduction in unnecessary obstetric surgery has also been suggested.

Family planning approaches include avoiding pregnancy at too young of an age or too old of an age and spacing births. Access to primary care for women even before they become pregnant is essential along with access to contraceptives. 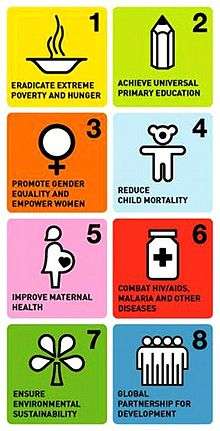 The Millennium Development Goals (MDGs) are eight international development goals that were officially established following the Millennium Summit of the United Nations in 2000.

Trends through 2010 can be viewed in a report written jointly by the WHO, UNICEF, UNFPA, and the World Bank.[31]

Countries and local governments have taken political steps in reducing maternal deaths. Researchers at the Overseas Development Institute studied maternal health systems in four apparently similar countries: Rwanda, Malawi, Niger, and Uganda.[32] In comparison to the other three countries, Rwanda has an excellent recent record of improving maternal death rates. Based on their investigation of these varying country case studies, the researchers conclude that improving maternal health depends on three key factors: 1. reviewing all maternal health-related policies frequently to ensure that they are internally coherent; 2. enforcing standards on providers of maternal health services; 3. any local solutions to problems discovered should be promoted, not discouraged.

Maternal deaths and disabilities are leading contributors in women's disease burden with an estimated 275,000 women killed each year in childbirth and pregnancy worldwide.[24] In 2011, there were approximately 273,500 maternal deaths (uncertainty range, 256,300 to 291,700).[35] Forty-five percent of postpartum deaths occur within 24 hours.[36] Ninety-nine percent of maternal deaths occur in developing countries.[5]