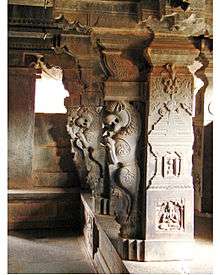 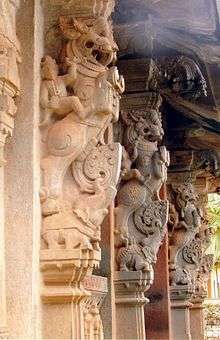 Yali ([jaːɭi]; also known as Vyala or Vidala in Sanskrit) is a mythical creature seen in many Hindu temples, often sculpted onto the pillars. It may be portrayed as part lion, part elephant and part horse, and in similar shapes. Also, it has been sometimes described as a leogryph (part lion and part griffin),[1] with some bird-like features.

In its iconography and image the yali has a catlike graceful body, but the head of a lion with tusks of an elephant (gaja) and tail of a serpent. Sometimes they have been shown standing on the back of a makara, another mythical creature. Some images look like three-dimensional representation of yalis. Images or icons have been found on the entrance walls of the temples, and the graceful mythical lion is believed to protect and guard the temples and ways leading to the temple. They usually have the stylized body of a lion and the head of some other beast, most often an elephant (gaja-vyala).[3] Other common examples are: the lion-headed (simha-vyala), horse-(ashva-vyala), human-(nir-vyala) and the dog-headed (shvana-vyala) ones.[4]

Yali is found as stone carvings in numerous temples in Tamil Nadu and across South India, including the Kailasanathar Temple, Tharamangalam, Salem district, Tamil Nadu.[5]