Yuichi Nishimura (西村 雄一, Nishimura Yūichi, born 17 April 1972) is a Japanese football referee. He has refereed in the Japanese J. League Division 1 since 1999 and has been a full international referee for FIFA since 2004. He recently became noticed for his work as referee of the opening game in the 2014 FIFA World Cup between hosts Brazil and Croatia and also 2014 AFC Champions League second-leg final.

Nishimura was the only Asian referee selected to officiate at the 2008 African Cup of Nations in Ghana along with assistant referees Toru Sagara from Japan and Jeong Hae-Sang from South Korea.

He refereed the final of the 2010 FIFA Club World Cup between Inter Milan and TP Mazembe.[1]

On 13 November 2010, Nishimura was the referee for the final match of the 2010 AFC Champions League Final, Seongnam Ilhwa Chunma vs. Zob Ahan, at the National Stadium in Tokyo.

At the 2012 Men's Olympic Football Tournament, Nishimura officiated the group stage matches between Brazil and Belarus[2] and host Great Britain and Uruguay.[3]

Nishimura was preselected as a referee for the 2010 FIFA World Cup.[5] He was the referee for the Uruguay against France game at the 2010 FIFA World Cup, along with fourth official Joel Aguilar and assistant referees Jeong Hae-Sang, and Toru Sagara.[6] Nishimura produced the first red card of the tournament, when he sent Uruguay midfielder Nicolás Lodeiro off the field for two yellow cards. During the first quarter-final game between Brazil and the Netherlands at Nelson Mandela Bay Stadium in Port Elizabeth, Nishimura sent off Felipe Melo of Brazil in the 73rd minute of the game. He was the 4th official for the final match of the World Cup, Netherlands vs. Spain. 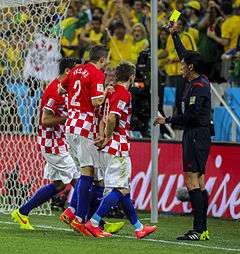 Nishimura (right) at the opening match

Nishimura was chosen by FIFA to referee the opening game of the 2014 FIFA World Cup between Brazil–Croatia. With this, he became only the third Japanese referee to officiate at two FIFA World Cups, after Shizuo Takada and Toru Kamikawa.[7] In the match, Nishimura became the first referee to use vanishing spray at a World Cup finals, as well as to have access to goal-line technology.[8] The game ended with a 3–1 victory for hosts Brazil. Despite criticism,

In 2012, Nishimura was named Best Men's Referee of the Year by the Asian Football Confederation.[13]