CAF represents the national football associations of Africa, runs continental, national, and club competitions, and controls the prize money, regulations and media rights to those competitions.

CAF is the biggest of six continental confederations of FIFA. CAF has been given 5 slots out of the 32 available since the 1998 FIFA World Cup in France, this increased to 6 in 2010 FIFA World Cup in South Africa, to include the hosts. The number of places returned to 5 for the 2014 FIFA World Cup.

CAF was founded on 8 February 1957 in Khartoum, Sudan by the Egyptian, Ethiopian, South African and Sudanese FA`s, following former discussions between the Egyptian, Somali, South African and Sudanese FAs earlier on 7 June 1956 at the Avenida Hotel in Lisbon, Portugal. Its first headquarters was situated in Khartoum, Sudan for some months until a fire outbreak in the offices of the Sudanese Football Association when the organization moved near Cairo. Youssef Mohammad was the first General Secretary and Abdel Aziz Abdallah Salem the president. The administrative center since 2002 is located in 6th of October City, near Cairo. It was initially made up of 4 national associations. Currently there are 56 associations, 54 full members beside Zanzibar and Réunion Island as associates. (see the bottom of this page or List of CAF national football teams).

The current CAF President is Issa Hayatou. Suketu Patel is the 1st Vice-President, Almamy Kabele Camara is the 2nd Vice-President while Hicham El Amrani is the Secretary General.[1] 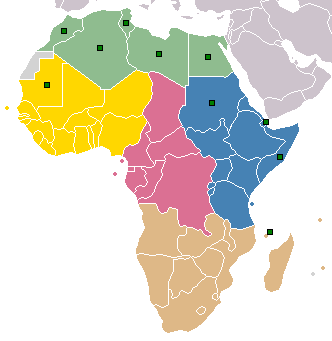 For each tournament, the number of teams in each finals tournament (in brackets) are shown.

The following CAF members have competed in the following FIFA Women's World Cups. Teams are sorted by number of appearances.

The following clubs are the top 10 clubs in CAF competitions.

Update as of 21 February 2015 in chronological order.
This article is issued from Wikipedia - version of the 12/2/2016. The text is available under the Creative Commons Attribution/Share Alike but additional terms may apply for the media files.