The Estadio Azteca (Spanish pronunciation: [esˈtaðjo asˈteka]) is a football stadium located in the suburb of Santa Úrsula in Mexico City, Mexico. Since its opening in 1966, the stadium has been the official home stadium of the professional Mexican football team Club América and the official national stadium of the Mexico national football team. With an official capacity of 87,000,[2] it is the largest stadium in Mexico.

Regarded as one of the most famous and iconic football stadiums in the world,[6][7][8][9][10] it is the first to have hosted two FIFA World Cup Finals.[11] In the 1970 World Cup Final, Brazil defeated Italy 4–1, and in the 1986 World Cup Final, Argentina defeated West Germany 3–2. It also hosted the 1986 quarter-final match between Argentina and England in which Diego Maradona scored both the "Hand of God goal" and the "Goal of the Century". The stadium also hosted the "Game of the Century", when Italy defeated West Germany 4–3 in extra time in one of the 1970 semifinal matches.

The stadium was also the principal venue for the football tournament of the 1968 Summer Olympics.[12] 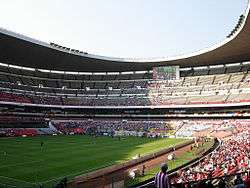 An internal view of the stadium

The Estadio Azteca was designed by architects Pedro Ramírez Vázquez and Rafael Mijares Alcérreca and broke ground in 1961. The inaugural match was between Club América and Torino F.C. on 29 May 1966, with a capacity for 107,494 spectators. The first goal was scored by Brazilian Arlindo Dos Santos and the second one by Brazilian José Alves "Zague"; later, the Italians tied the game, which ended in 2–2 draw. Mexican president Gustavo Díaz Ordaz made the initial kick and FIFA president Sir Stanley Rous was the witness.

A modern illumination system was inaugurated on 5 June 1966 with the first night game played between Spanish side Valencia C.F. and Necaxa. The first goal of the match was scored by Honduran José Cardona for Valencia. Roberto Martínez o Caña Brava became the first Mexican to score a goal in the stadium after scoring for Necaxa. The result was a 3–1 victory for Valencia.

The Estadio Azteca is also the site in which Pelé and Diego Maradona (during the 1970 and 1986 FIFA World Cup) lifted the trophy for the last time (The Jules Rimet Trophy and the current FIFA World Cup Trophy, respectively).

Estadio Azteca has also been used for musical performances throughout its history. Michael Jackson (5 sold-out shows in 1993),[13] U2 (in 2006 and 2011), Luis Miguel (in 2002), Elton John, Maná, Juan Gabriel, Gloria Estefan, Jaguares, Lenny Kravitz, *Nsync, Hanson, Ana Gabriel, and The Three Tenors all have become part of the stadium's main spectacle. The stadium has also been used for political events, including Mexican president Felipe Calderón's campaign closure in 2006, as well as religious events, like the appearance of Pope John Paul II in 1999.[14]

The stadium has undergone gradual improvements and renovations, including the replacing of seating within the stadium as well as the installation of electronic advertising boards. In May 2015, modern Panasonic LED panels were installed at the north and south ends of the stadium, replacing the phosphorous panels installed in 1998.[15]

In February 2015, a vast renovation plan was unveiled, with the intention that the completion of the project coincide with the stadium's fiftieth anniversary and with Club América's centenary in 2016, as well as the construction of a commercial hub outside the stadium to be completed some time in 2019. It was reported that Grupo Televisa, owners of the stadium, approved a joint-venture bid from private development firms IQ Real Estate and Alhel. The hub, named "Foro Azteca", will reportedly consist of a mall, office spaces, two hotels, new leisure spaces and parking spaces for 2,500 cars.[5] The renovations to the stadium have been planned in two phases; the first consists of the demolition of the restaurant and seating at the lower east stand and the construction of a new hospitality area with dining and banqueting spaces. The second phase will see the construction of new media boxes and private skyboxes at the upper west stand.[16] The renovations to the stadium were completed in November 2016.[17] 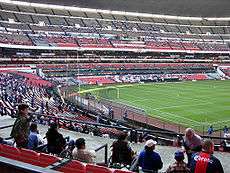 Estadio Azteca prior to a kickoff

The name "Azteca" is a tribute to the Aztec heritage of Mexico City. The stadium is now owned by Mexican TV consortium Televisa. In order to avoid people associating the stadium's name with that of its rival TV Azteca, Televisa officially changed the stadium's name to Guillermo Cañedo, a top executive, long-time football advocate at Televisa and prominent member of the executive committee of FIFA. The change took place in 1997, following Cañedo's death on 20 January 1997.[18] However, the change did not go well with the general population, who generally refused to refer to the stadium by its formally new name. Following a schism where two of Cañedo's sons, who worked at Televisa, switched camps and went to TV Azteca,[19] Televisa quietly returned the stadium's name to its original version. Some people did not even notice, as they usually referred to the stadium as "Azteca" during the name change.

The stadium has been given the nickname "Coloso de Santa Úrsula" which in English means "Colossus of Saint Ursula", due to its large structure. Santa Úrsula refers to the part of town where the stadium resides in Mexico City.[20]

Tickets are available up until kick-off times from the ticket office which is located at the front of the stadium, located towards the exit ramps from the Azteca station. Prices start from as little as MXN$100 (about US$5 as of 2016), and could cost up to MXN$500 (about US$26 as of 2016) for more high-profile matches.[21]

A panorama of Estadio Azteca during a Club América match (Mexico City) vs Tecos (Guadalajara), 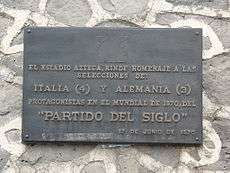 Plaque commemorating the "Game of the Century"

There is also a commemorative plaque with the names of the first goal scorer in the inaugural match and in the first match played at night. 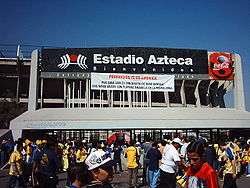 Estadio Azteca has hosted a variety of international sporting competitions, including: