1984 State of the Union Address 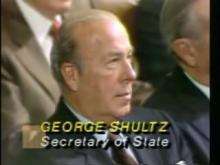 President Reagan delivers the 1984 State of the Union

The speech lasted 43 minutes and 2 seconds[1] and contained 4931 words.[2] The address was broadcast live on radio and television.

Samuel Pierce, the Secretary of Housing and Urban Development, served as the designated survivor.[4]