Maureen Elizabeth Reagan (January 4, 1941 – August 8, 2001) was the first child of Ronald Reagan and his first wife, Jane Wyman.[1] Her brother was Michael Reagan and notable siblings were also Patti Davis and Ron Reagan, from her father's second marriage to Nancy Davis. 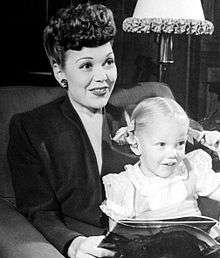 Reagan was born and raised in Los Angeles, California. She graduated from Immaculate Heart High School and briefly attended Marymount University.[2] Her parents also had another daughter, Christine, who died shortly after birth.

Reagan pursued a career in acting in her youth, appearing in films such as Kissin' Cousins (1964) with Elvis Presley.[3]

Reagan spoke on behalf of Republican candidates throughout the country, including twenty appearances alone in 1967 for an unsuccessful Mississippi gubernatorial nominee, Rubel Phillips, a former segregationist who ran that year on a platform of racial moderation.[4]

Reagan was the first daughter of a president to run for political office,[5] but both of her attempts at election ended in defeat. She ran unsuccessfully for the United States Senate from California in 1982 – Pete Wilson was the eventual winner – and in 1992 for California's 36th congressional district.[6]

Although they maintained a united front, Maureen Reagan differed from her father on several key issues. Although reared Roman Catholic following her mother's conversion, she was pro-choice on abortion.[7] She also held the belief that Oliver North should have been court-martialed.[8]

After her father announced his diagnosis of Alzheimer's disease in 1994, Maureen Reagan became a member of the Alzheimer's Association board of directors and served as the group's spokeswoman. During her hospitalization for melanoma cancer, Maureen was only floors away from her father, who had suffered a severe fall.[9]

She was married three times:

Reagan died in Granite Bay, California, on August 8, 2001, aged 60, from melanoma, thirty-three months before her father died.[2] Reagan is interred at Calvary Catholic Cemetery and Mausoleum in Sacramento, California.[17]

Reagan volunteered with actor David Hyde Pierce, of TV's Frasier, at the Alzheimer's Association. At her funeral on August 19, 2001, Pierce spoke to the gathering at Cathedral of Blessed Sacrament in Sacramento, California, and recalled his friend's tireless devotion to fighting the mind-robbing illness. "When she was given lemons, she did not make lemonade. She took the lemons, threw them back and said, 'Oh, no you don't.'"[18]